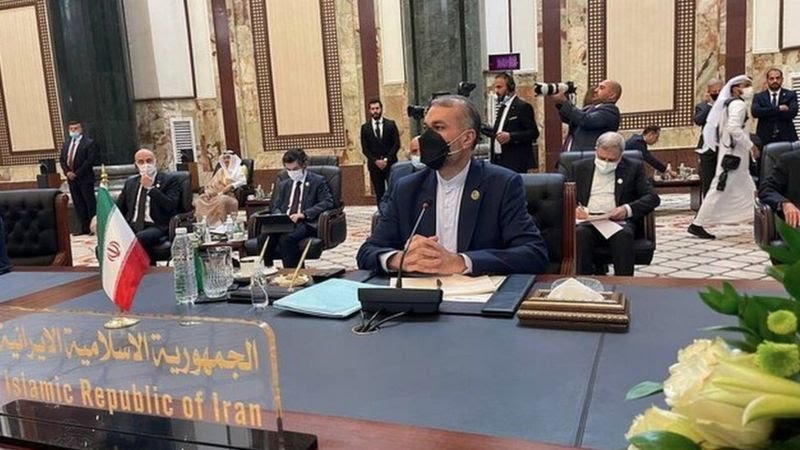 Iran’s foreign minister Hossein Amir Abdollahian has said regional peace can only be achieved through dialog within the region.

Speaking at the Baghdad summit, Amir Abdollahian expressed hope that regional nations agree that regional peace is not possible in the absence of trust. He added that the new Iraq is in need of construction and improved regional relations.

The Baghdad summit kicked off earlier on Saturday with delegations from Iraq’s neighbors and some other countries in the region and beyond.

Iraq says the meeting is aimed at defusing tension in West Asia, expanding relations among regional countries and resolving differences among Iraq’s neighbors.

The full text of the Iranian Foreign Minister’s speech:

I am very pleased to be present today at the conference in support of Iraq in Baghdad on behalf of the Islamic Republic of Iran and esteemed President Dr. Raeisi. This meeting, with regional countries in attendance, confirms the efforts of the Republic of Iraq in creating areas for cooperation and interaction among the countries of the region, and I hope that, through these meetings, we can make a prosperous, developed and free region.

Today, Iraq is playing an important role in the region thanks to its constructive efforts and vision. The Islamic Republic of Iran was one of the first regional countries to recognize the new Iraq and to develop its political, economic and trade ties with Iraq by supporting the political processes in this country.

The new Iraq, liberated from terrorism, today needs internal reconstruction and strengthening, and the expansion of cooperation in the region. The Islamic Republic of Iran, while supporting the stability, security, independence, territorial integrity, dignity, authority and promotion of Iraq’s regional and international status, declares its readiness to develop bilateral and regional cooperation.

In recent years, trade between the Islamic Republic of Iran and the Republic of Iraq has reached more than 12 billion dollars. The existence of eight official active border crossings between the two countries and the continuation of trade exchanges via these crossings, even despite the Coronavirus pandemic, indicate the economic entanglement of the two nations. In recent years, Iran has made a significant contribution to the development of Iraq’s economic and trade relations by exporting technical and engineering services, gas and electricity.

The rise of Daesh was one of the most important dangers faced by the region and left irreparable damage. Unfortunately, Iraq has suffered a lot from the emergence of terrorist groups. Were it not for the will of the Iraqi people, the support of the honorable religious authority and the convergence of the Iraqi people from all walks of life, it would not have been clear what would happen to Iraq and other regional countries and how deeply the region and the world would be endangered by terrorist threats.

The Islamic Republic of Iran rushed to the aid of the friendly and brotherly country of Iraq in its fight against terrorism and did not withhold any assistance in this direction. The Iraqi people, parties, various groups and the Iraqi government have sacrificed thousands of lives for independence and the fight against terrorism.

However, the US government committed a heinous crime and martyred two fighters of the anti-Takfiri and counterterrorism front, Martyr Sardar Soleimani and Martyr Abu Mohandi Al-Mohandes. Not only did the US not bring peace and security to the people of this region, but it’s the main cause of insecurity, and this is clearly visible in many countries in the region.

Here, I would like to emphasize the role and support of regional nations in stabilizing and resorting security to Iraq including the friendly and brotherly country of the Syrian Arab Republic. I would like to express regret that Syria is not attending this summit.

The fate of the governments and nations of this region are intertwined according to common religious and cultural, traditional, historical and geographical interests. The Islamic Republic of Iran has always emphasized that peace is possible only through dialogue and negotiation within the region and hopes that regional nations will agree that security will only be achieved through mutual trust, reliance on national capabilities, strengthening relations and good neighborliness as well as through the non-intervention of extra-regional governments. This common belief can pave the way for many joint political, economic and cultural efforts in the region and guarantee the grounds for all-round growth and development of regional countries in the shadow of common and lasting security and by utilizing their God-given wealth.

Our region has all the religious, cultural and civilizational characteristics as well as material and spiritual capacities for regional cooperation and convergence, but unfortunately, due to foreign interventions and the dominance of security-oriented ideas, it has many problems, including war, instability and insecurity.

What we need today more than ever before is “sustainable regional security” with the participation of regional countries. Regional security will materialize depending on the use of economic resources to build a coalition for peace and development.

The Islamic Republic of Iran expresses its support for the Iraqi government and people and its internal decisions including the withdrawal of foreign troops and holding early elections, and it welcomes Iraq’s constructive role in promoting a culture of dialogue and regional cooperation. Iran considers cooperation within the region as the basis for establishing stability and peace in this way. The Islamic Republic of Iran, emphasizing the important role of other countries in the region, declares its readiness to advance these goals.

With great pleasure, I declare, at the inauguration of Iran’s new government, that our foreign policy, being “balanced, active and smart”, emphasizes the priority of relations with neighbors and other countries in the region, and we warmly shake hands with all neighboring and regional nations .

I once again thank the Iraqi government for hosting this summit, and I wish success and honor for the Iraqi people and government.