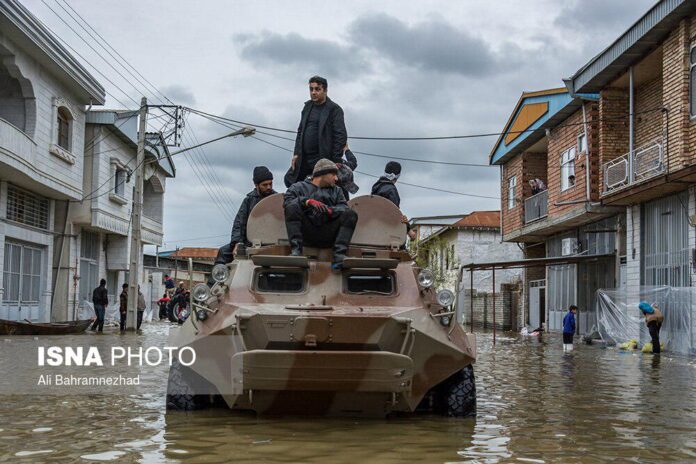 All public facilities and state bodies along with Armed Forces have been mobilized for dealing with the floods that hit and are expected to hit various parts of the country to ensure people’s safety.

Spokesman of the Islamic Revolution Guards Corps (IRGC) Brigadier General Ramezan Sharif said all units of the body have been put on high alert to rush to help any Iranian affected by the floods.

“At the order the top commander of the IRGC, our units are completely prepared to cooperate with the related organizations to cope with the floods,” he said.

The general underlined that the IRGC gives assurance to the Iranian nation that it will stand behind them till the dangers of the floods are completely removed.

President Hassan Rouhani also ordered all state bodies to be prepared for the floods, while continuing relief efforts.

In a phone conversation with Iranian Interior Minister as well as a number of governors in western and southern provinces on Sunday, President Rouhani expressed his gratitude for the serious attempts by all crisis management centres established across Iran as well as other executive bodies including army, the Islamic Revolution Guards Corps (IRGC), police and voluntary forces in managing the floods and their consequences.

During the calls, President Rouhani underlined the need to take full advantage of all available technical and media capacities to cope with the floods.

Meanwhile, top Army official Rear Admiral Habibollah Sayyari said the army has established a coordination centre in the southern city of Ahvaz to cope with the possible floods in the region.

He went on to say that the main priority of establishing the centre is to offer required services to the people.

According to the Iranian commander, the centre, created at the order of the Iranian army’s top commander, is equipped with various technical means to cope with the anticipated floods. He noted that the centre is also completely prepared to establish cooperation with the related bodies involved with operations to manage the situation amid the floods.

Meanwhile, First Vice-President Es’haq Jahangiri praised the joint efforts of Armed Forces and state bodies, saying the military forces showed they stand by the nation in the hardships.

A state of emergency is in place in several Iranian provinces in anticipation of possible flash floods. People are requested to take preemptive measures as heavy rains continue in northern, western and southwestern parts of the country. Residents of 14 villages have evacuated their homes to seek shelter in safe areas. Several Iranian provinces were hit by rare flash floods in the past week. According to Iran’s Red Crescent Society, the disaster has claimed the lives of at least 45 people so far. Aid and relief operations are in full swing in the affected areas.