All anti-Iran sanction must be lifted concurrent with nuclear deal: Zarif 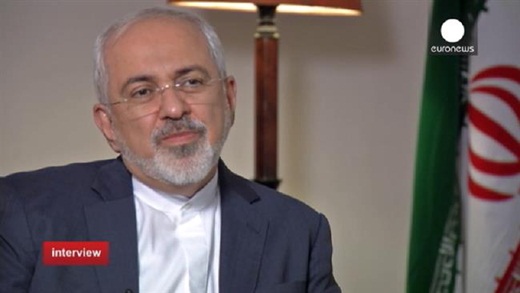 The US started talking about ‘phased sanctions’ whereas there is no mention of ‘suspension’ or ‘phase’ in the Lausanne statement, said Zarif in an interview with Euronews.

Iranian Foreign Minister Mohammad Javad Zarif says all sanctions against Tehran must be lifted on the day of a possible nuclear deal between Iran and P5+1.

Iran and P5+1– Russia, China, France, Britain, the US and Germany – issued the joint statement at the end of eight days of intensive nuclear negotiations in the Swiss city of Lausanne on April 2, saying that no Iranian nuclear facility will be shut down or suspended and all sanctions against the Islamic Republic will be lifted once an agreement on Tehran’s nuclear program is signed.

Referring to the statement, Zarif added, “It’s clear that all sanctions, all economic and financial sanctions will be terminated. On the day that we agree… the [UN] Security Council will adopt a resolution, which will terminate all the previous resolutions and will set the stage for termination of all sanctions.”

Less than 24 hours after Iran and P5+1 reached the mutual understanding over Tehran’s nuclear program, the US published its own fact sheet detailing the parameters for the Joint Comprehensive Plan of Action (JCPOA). The sheet, however, had differences with the original joint statement.

However, on April 7, the European Union said the only valid statement regarding the nuclear talks with Iran was the one published in Switzerland. “The general statement, which is valid, is the one which has been agreed on and delivered on the second of April by [EU] High Representative [for Foreign Affairs and Security Policy] Federica Mogherini and Iranian Foreign Minister [Mohammad] Javad Zarif in Switzerland,” said Catherine Ray, Mogherini’s spokesperson, at a media briefing in Brussels.

Although Iran has reiterated that all sanctions have to be lifted simultaneously as soon as the final deal comes into force, the US edition indicates that the architecture of nuclear-related sanctions will be retained for much of the duration of the deal.

Elsewhere in his remarks, Zarif noted that negotiations were sometimes difficult because Western diplomats “had come to believe that sanctions were an asset, were something that they should not relinquish so easily.”

The Iranian foreign minister also mentioned two objectives for the nuclear talks, saying, “One objective was to ensure that Iran’s nuclear program will remain always peaceful and the second objective was to remove the sanctions.”

Iran and the six countries are now expected to start work to draw up a final comprehensive deal over the Islamic Republic’s nuclear program by the self-designated June 30 deadline.

In response to a question about Russia’s recent decision to deliver the S-300 air defense missile system to Iran, Zarif hailed the move as a contractual commitment.

“We had an agreement with Russia… to provide the means for our air defense. These are not offensive weapons, they are defensive weapons that we had ordered a long time ago from Russia, and now they have decided to honor their contract and commitment and deliver.”

He went on to say that the delivery is not against any UN sanctions because Iran regards the bans as “illegal and unjustified.”

On April 13, Russian President Vladimir Putin signed a presidential decree, paving the way for the long-overdue delivery of the S-300 missile shield system to Iran.

The move, which greatly irked the Western governments and their regional allies, came following the mutual understanding on Tehran’s nuclear program in Lausanne.

Iran and Russia have reportedly agreed to examine all technical issues related to the S-300 missile system in the coming months, so that it could be delivered to Tehran by the end of the current year.