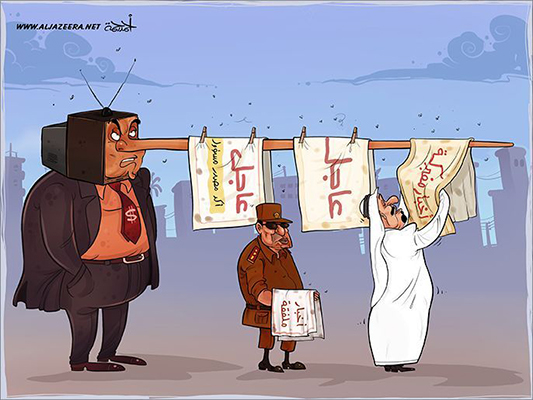 Saudi social media users were outraged after Qatar’s Al Jazeera channel posted a cartoon denigrating the Saudi king, but the cartoon was later removed in a move to prevent the deepening of a row between Qatar and fellow Persian Gulf Cooperation Council members.

A cartoon recently posted on the Doha-based Al Jazeera’s Twitter feed set off a storm of condemnation by Saudi Twitter users. They believed the two figures in the ‘insulting’ cartoon looked like the Saudi King Salman and Egyptian President Abdel Fattah el-Sisi.

The cartoon was eventually removed by the network in an attempt to ease the tension between the two neighbouring Arab states.

Qatar’s government later declared that the news agency had been hacked, and the remarks attributed to the emir were false. However, Saudi Arabia, Bahrain, the UAE, and Egypt blocked all Qatari media in reaction to the emir’s remarks.

The Qatari emir, however, did not try to ease the tension, and called Iranian President Hassan Rouhani to congratulate him on his re-election. Sheikh Tamim also noted that there is no barrier to the expansion of Tehran-Doha relations.