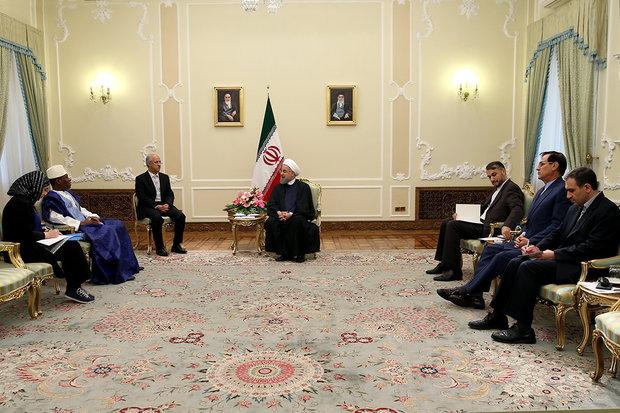 On Tuesday, Accredited Ambassador of Togo to Tehran Mohamed Sad Ouro-Sama met with President Rouhani, where the President highlighted the importance of Africa in Iran’s foreign policy scheme. “Iran and Togo have developed a similar position on major international issues, especially on terrorism and extremism; we welcome improved relations with Togo in fields of mutual interest,” Rouhani said at the meeting where Ouro-Sama handed in his credentials.

Ouro-Sama voiced his country and nation’s respect for Iranian government and nation and conveyed gratitude voiced by Togolese president for Iran’s role in bringing peace and stability to the region in fighting terrorism. He urged deeper ties with Iran and exchanges of ideas and positions on important international issues.

Rouhani also received the credentials of the Bangladeshi ambassador Mujibur Rahman Bhuiyan in his second meeting, where he emphasized improving ties with Bangladesh as an Islamic country and a friend of Iran. “Iran and Bangladesh have had long and cordial relations. Both countries have also similar positions on international issues. After JCPOA implementation, the grounds for extending ties have become wider, which should be exploited in the interests of both nations,” President Rouhani said.

Rouhani told the new ambassador that preparing the grounds for effective ties between Iran and Bangladesh was an important mission. “Iran welcomes working with Bangladesh in transferring its experience in technology and engineering sectors, trade, and culture to Bangladesh. Science and university exchanges provide other avenues where both countries could work in bringing better situations to bilateral ties in the future,” he added.

Bhuiyan underlined the cordial ties between Iran and Bangladesh, and called for more improved relations in politics, economy, trade, business, and infrastructure.