Afghan president calls for expansion of ties with Iran 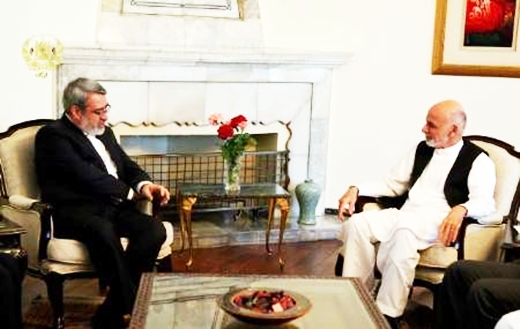 Kabul has always sought to bolster trade with Tehran, said the Afghan president in a meeting with the Iranian interior minister.

“Kabul has always been looking for strengthening of trade ties with Tehran,” President Ashraf Ghani said.

President Ghani added that minor differences between the two countries in some issues should not hinder the expansion of cooperation.

Rahmani Fazli, for his part, emphasized the importance of improving security in Afghanistan, expressing the Islamic Republic’s readiness to help restore peace in the war-torn country.

“Afghanistan’s security is important to us; Tehran understands the country’s situation and will cooperate to restore peace to Afghanistan,” Rahmani Fazli said.

He said that Tehran and Kabul enjoy amicable relations and added that as a close neighbor, the Islamic Republic believes that “a threat to Afghanistan will in fact be a threat to Iran.”

The Iranian minister called on the two countries to have closer cooperation on the economic front and in the fight against terrorism and smuggling of narcotics as well as border control.