Achievements of the Ramadhan War 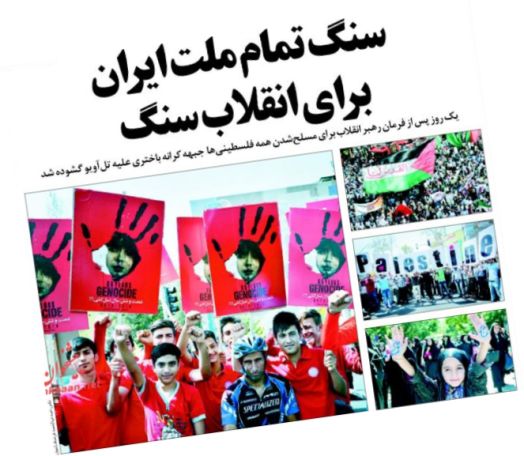 Seven reasons why the war raging in Gaza constitutes an achievement for the Palestinian resistance movement.

With the Israeli offensive against Gaza dominating the international news during the fasting month of Ramadhan, Javan Daily, which unofficially reflects the viewpoints of the Islamic Revolution Guard Corps, ran an article on July 26, 2014 which suggests the war which is raging in the Palestinian enclave constitutes an achievement for the Palestinian resistance movement. Here is an excerpt of the article penned by Mohammad Javad Akhavan:

1. For the first time, the Palestinian resistance fighters have mounted an amphibious assault and sneaked past the frontlines to take the Zionist enemy by surprise. Military experts admit that the barrage of Palestinian rockets has been unprecedented.

2. The Palestinian resistance movement has managed to take a Zionist soldier captive in the heat of battle. Up until now, the [Israeli] military personnel had only been taken captive in ambushes. In the Palestinian conflict, taking the Zionists captive is of strategic importance, because such prisoners can be used as leverage against the Zionist regime to set Palestinian prisoners free and make concessions.

3. The war marked the first time the Palestinians have used drones in a conflict. What lends added importance to this new Palestinian weapon is that despite using very advanced radar technology the Zionists have been unable to detect the unmanned aerial vehicles of the Palestinian movement.

4. The rockets the Palestinian resistance has used in this war have flown significantly deeper into the enemy territory, bringing northern Israeli towns such as Haifa within striking distance of the resistance. Besides, the rockets have been more precise, targeting for the first time the nuclear facilities of the Zionist regime such as Dimona. The Palestinian rockets have also forced the shutdown of Tel Aviv’s Ben Gurion International Airport, and prompted the Zionist prime minister to cut short one of his news conferences.

5. The number of Zionist casualties in this war has beat expectations, prompting the officials of the regime to try their best to censor casualty figures. In light of the fact that spirits are low among the residents of the occupied territories, Zionist officials know that the release of correct figures will definitely do irreparable damage to the morale of the Zionist community.

The invasion of Gaza was officially said to be aimed at eliminating the Palestinian rocket threat, but that objective was never met and Zionist media have admitted that Mossad has been unable to spot Palestinian rocket launchers.

6. Besides victories on the military front, the Ramadhan war constituted other achievements for the Palestinians which will come to light in the future. For the first time during this recent war, anti-war rallies were held in the occupied territoriesand divisions within leaders of the Zionist regime became more and more apparent.

The war has carried a hefty price tag for the Zionist regime too. For instance, Haaretz, an Israeli newspaper, has quoted officials as estimating that the cost of the war in its first two weeks ran to $585 million. The overall cost is estimated to rise to $2.3 billion to $2.9 billion, between 0.75% and 1% of the [Israeli] GDP. By admission of Zionist officials, tourism, a major source of revenue for Tel Aviv, has suffered as much as $500 million in losses and the long-term impact of the war on Israel’s economy will only come to surface in the long run.

7. Last but not least, although Western leaders have either kept silent in the face of Israeli atrocities or thrown their weight behind the Zionist regime, the support people around the world lent to the Palestinian cause proved that the public diplomacy of the movement has been successful.

What was mentioned above was just part of the achievements of the resistance movement. What is clear here is that as the Supreme Leader of the Islamic Revolution [Ayatollah Ali Khamenei] has said, “Stiff armed resistance is the only way to deal with this regime. Palestinians need to act firmly in the face of the Zionist regime.