A look at Iranian newspaper front pages on Jan 6

The comments of the Supreme Leader at a meeting with visiting Chief Executive Officer of Afghanistan Abdullah Abdullah dominated the front pages of Iranian newspapers on Wednesday. Also appearing on the cover of dailies was the result of a first round of screening for parliamentary elections.

Ettela’at: The Supreme Leader has said that ethnic unity and official solidarity is key to solving the problems Afghanistan is facing.

In a meeting with visiting Afghan chief executive, Ayatollah Khamenei said that Iran views Afghan security and progress as its own.

Ettela’at: President Hassan Rouhani has said that Tehran stands ready to cooperate with the EU in the fight against terrorism.

In a meeting with the Danish foreign minister, President Rouhani also said that Iran’s approach to international ties is based on win-win interaction.

Ettela’at: The Judiciary chief has said that there are thousands of unimplemented court rulings on pulling down unauthorized structures and buildings.

Ettela’at: International figures and institutions have expressed concern over the growing number of executions in Saudi Arabia.

The British prime minister, the German chancellor, the UN secretary general, the Australian foreign minister, Human Rights Watch and the Swiss government have expressed concern over executions in the kingdom.

Ettela’at: The government spokesman has said that hands behind the scenes are involved in recent incidents.

Mohammad Bagher Nobakht further said that storming embassies is below the dignity of the Iranian nation.

Ettela’at: Air pollution will make its ominous comeback to Tehran and industrial parks on Thursday. Abrar: Parliament Speaker Ali Larijani has said that the chamber supports allocation of budget to the country’s missile program in the Sixth Development Plan.

Abrar: Hamid Rasaei, [a hardline principlist MP in the current parliament] has been found unqualified to seek reelection. Arman-e Emrooz: Seyyed Hassan Khomeini [the grandson of the late Imam Khomeini] has not bowed out of the race for the Assembly of Experts, his brother Seyyed Ali said.

In another development, the executive boards [affiliated with the Interior Ministry] have given the [initial] go-ahead to 90 percent of electoral candidates. Asia: Representatives of Italian food giants will visit Iran along with the Italian agriculture minister. 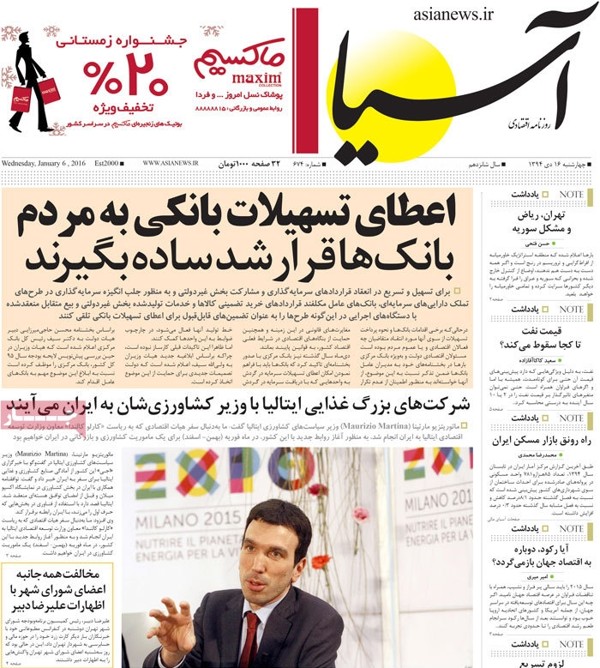 Asrar: Tehran MP Ali Motahari has filed a new complaint against those who ordered an attack on him in the southern city of Shiraz where he was to deliver a speech last year.

Asrar: Iran and Russia are to strike an oil alliance to contain Saudi Arabia. Hemayat: The parliament speaker has said that the missile capability of the Islamic Revolution Guard Corps sends chills down the enemy spine. Iran: The SWIFT (Society for Worldwide Interbank Financial Telecommunication) ban on Iran will be lifted within two weeks. Jomhouri Islami: Trade transactions between Iran and Denmark will increase in the near future.

The announcement comes after a state visit to Tehran by the Danish top diplomat. Kaenat: The chairman of parliament’s National Security and Foreign Policy Committee has said that IAEA inspectors are expected in Iran.

Kaenat: President Rouhani’s chief of staff has said that the adventurism of the Saudis will harm their interests. Kayhan: Some 100 hopefuls have withdrawn from the race for the Assembly of Experts. Resalat: Failure to take the [Ijtihad] test for Assembly of Experts aspirants amounts to withdrawal from the race, said a spokesman for the Guardian Council. Setareh Sobh: You don’t behead individuals for being critical, President Rouhani has said. Shahrvand: A child has been born in blizzard condition after being rescued by the Red Crescent Society.