A look at Iranian newspaper front pages on Jan 30 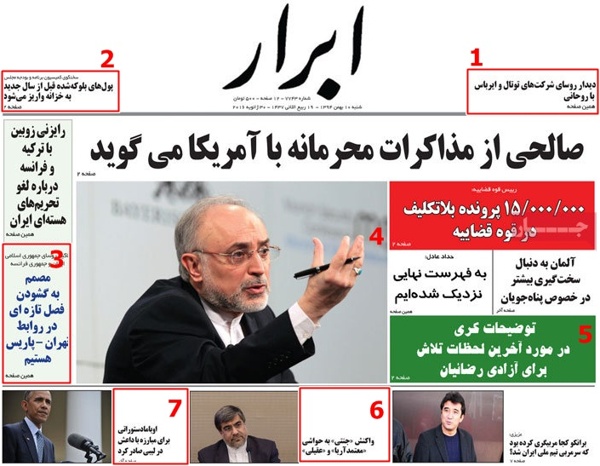 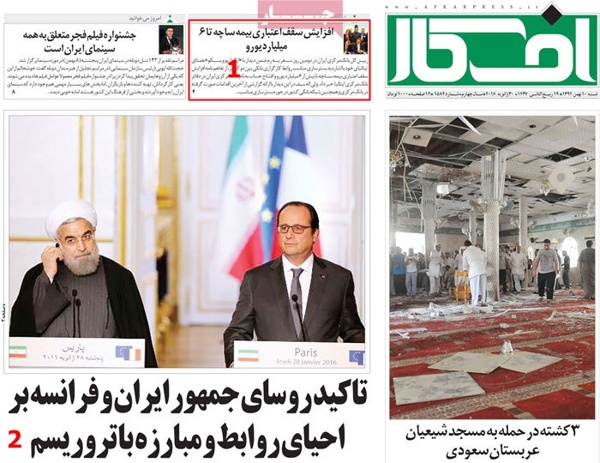 Hassan Khomeini, Assembly of Experts hopeful, says he will react to his disqualification to respect people’s aspiration.

In an interview with NBC, head of the Atomic Energy Organization of Iran, Ali Akbar Salehi, told about Iran-US talks behind closed doors. He said supreme Leader made 4 conditions for nuclear agreement 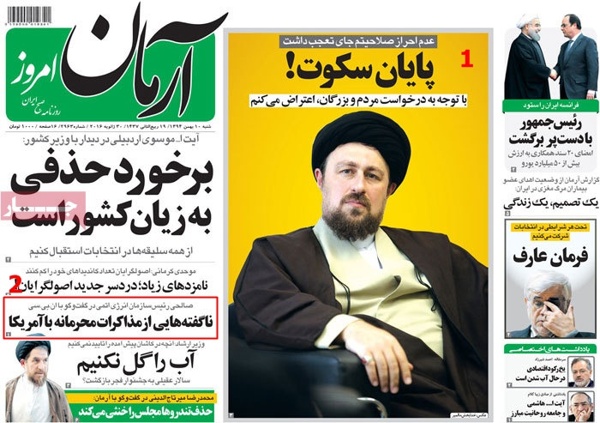 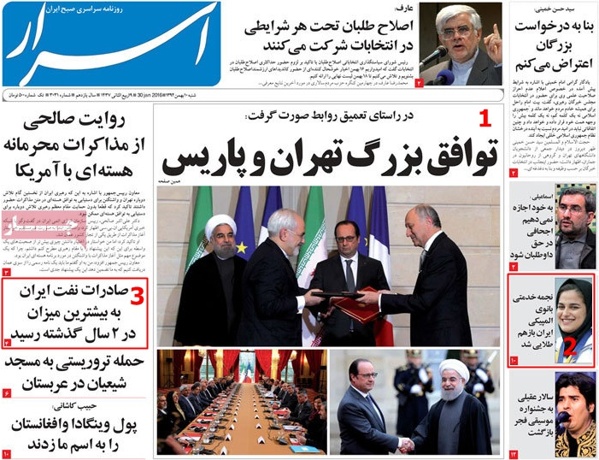 2- Rouhani returns with full hands
Signature of 20 cooperation deals, willingness of Total and Airbus to return to Iran and fresh ties with UNESCO were some of the outcomes of an Iranian delegation headed by Iranian President Hassan Rouhani to Europe. 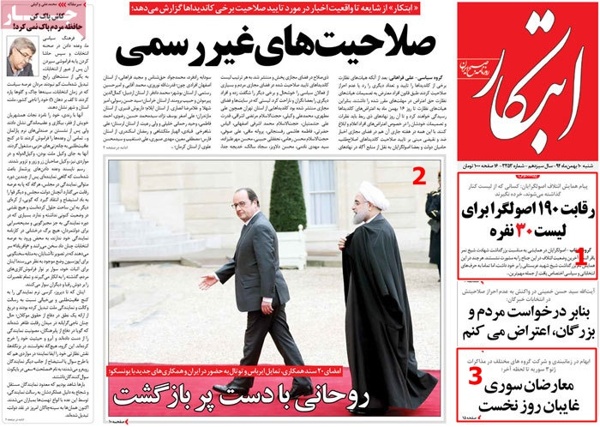 2- Celebration of 500 years of artistic activities

6- Report: People have no idea where carpet museum of Iran is located! 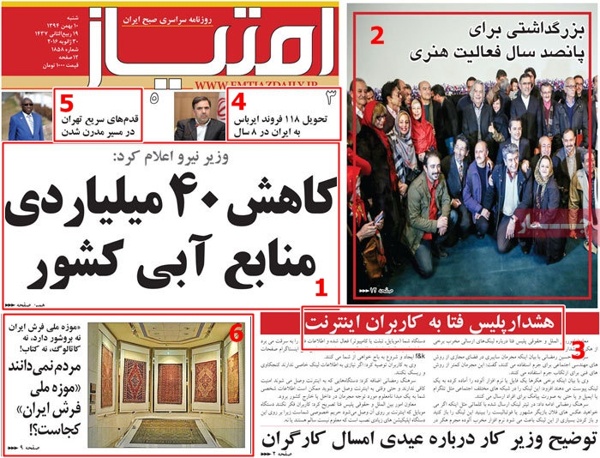 4- Calls for unity of religious leaders against extremism 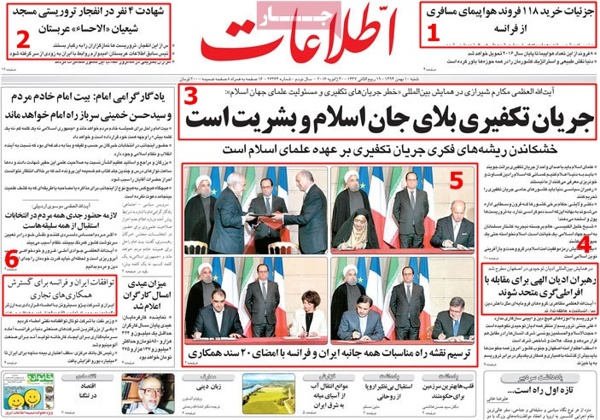 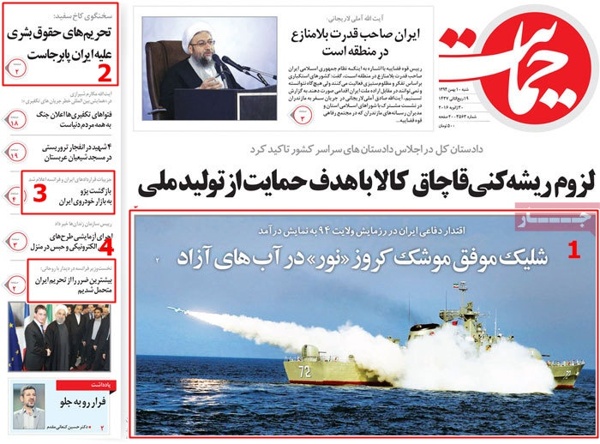 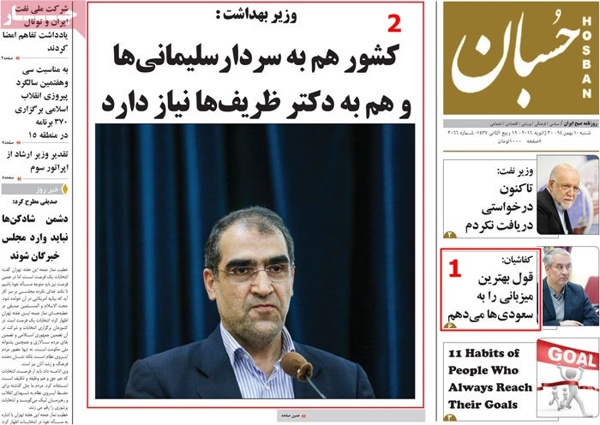 1- Rouhani: People must not lose hope in elections 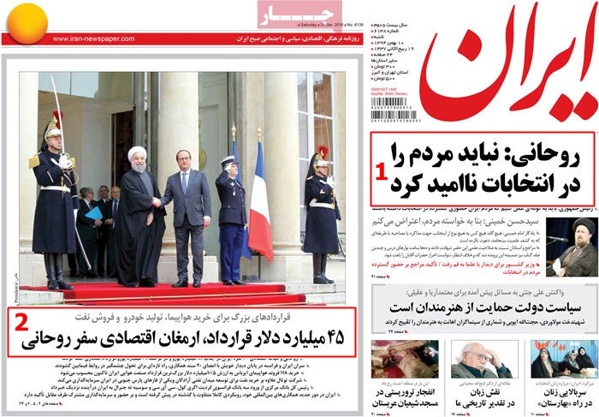 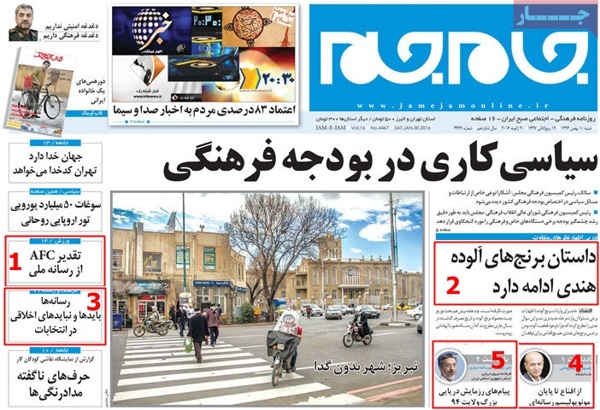 Tehran’s Education Administration has launched an initiative to hold classes for high school students to teach them the principles and terms of Tehran’s nuclear agreement with the P5+1 group of countries. The initiative’s implementation is pending on a decision by the council of schools. 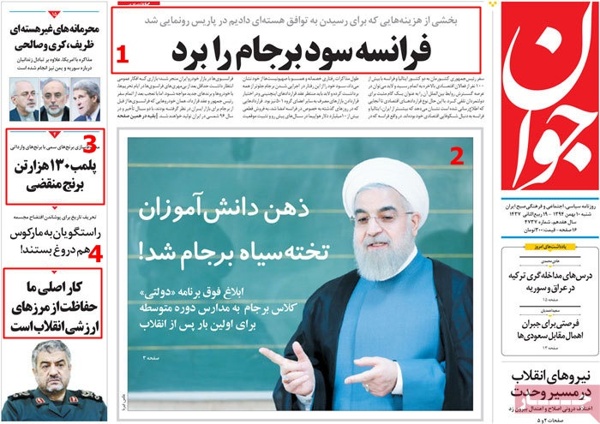 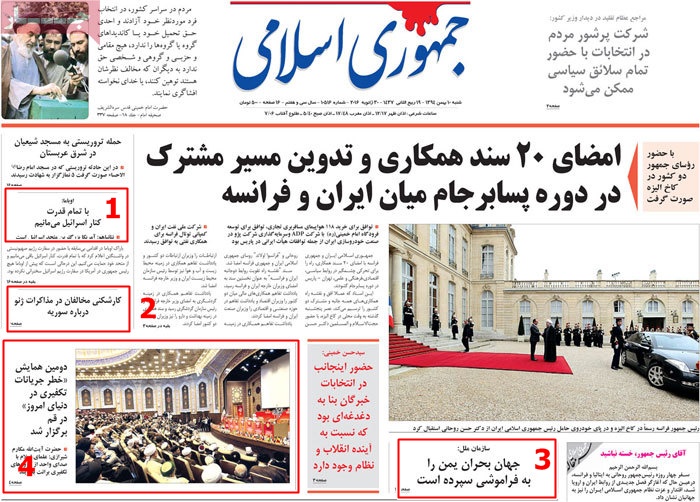 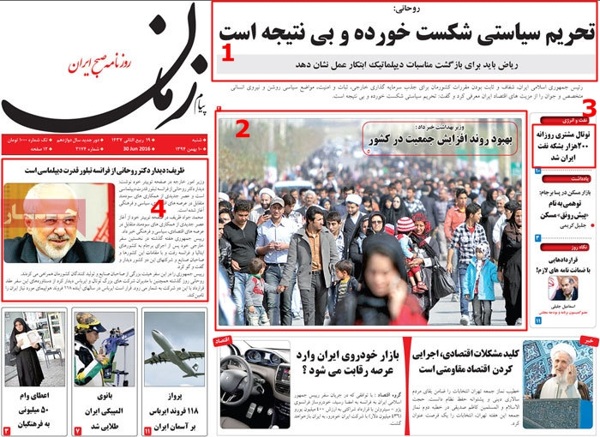 1. Iran to launch herbal pharmacies instead of herbal shops: Minister 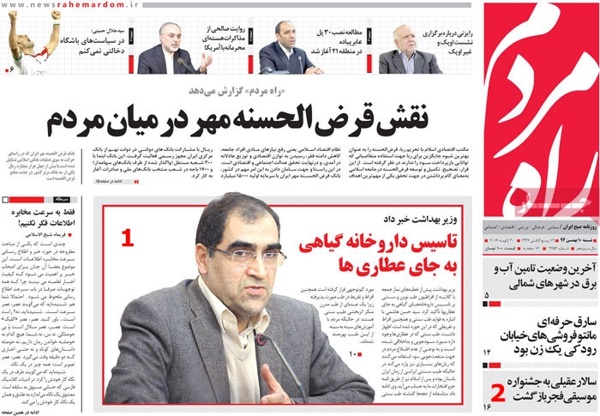 1. Ayatollah Mowahedi Kermani: All Iranian Principalists vote for one list; US infiltration must be stopped

2. Judiciary Chief calls for addition of ethics to religious democracy

3. Dangerous US plot in Baghdad; Dissolution of Iraq in exchange for containing ISIS

Addressing conference in the central province of Qom on Friday to discuss threats of Takfirism, Ayatollah Makarem Shirazi said logic must be clung in order to uproot Takfirism in the world of Islam.

“Extremist trends have nothing to do with Islam,” said the grand cleric. 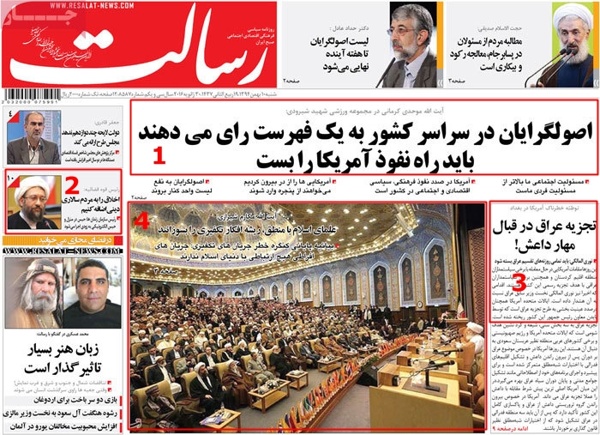 A report about the negative and positive impact of the media in the lives and treatment of children.

3. A modest 700 million dollars; [The mystery behind a $700M donation from the Saudi royals to the Malaysian PM] 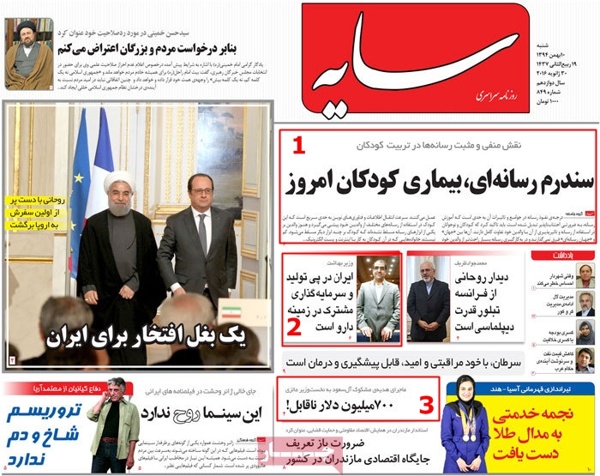 – $51b achievement of Rouhani’s visit

Iran inked a deal with Airbus valued at more than 10 billion dollars. 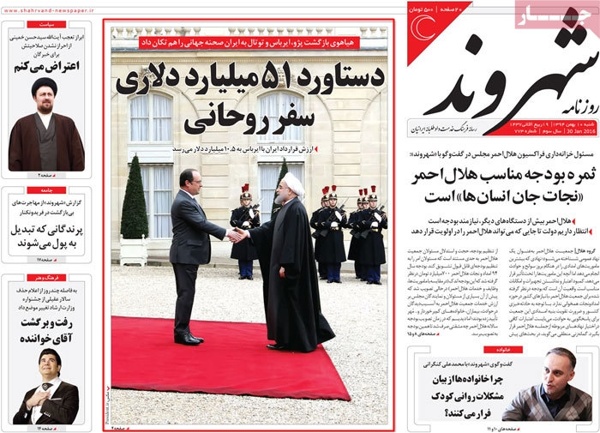 1. IRGC Chief: No security concerns but cultural ones

2. IRGC Navy Chief: US unable to saber-rattle before us

3. Water, environment areas of interest for France, Italy in cooperation with Iran 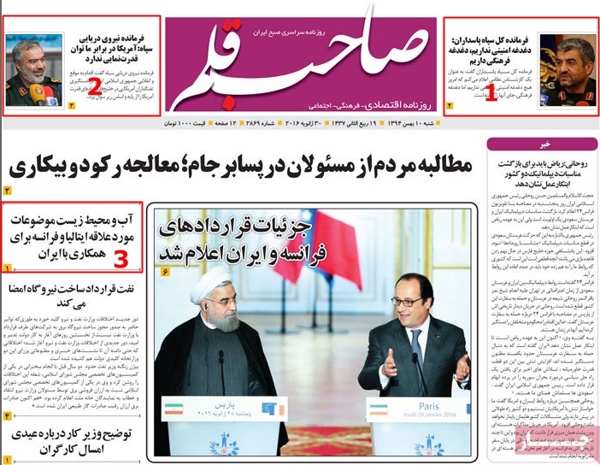 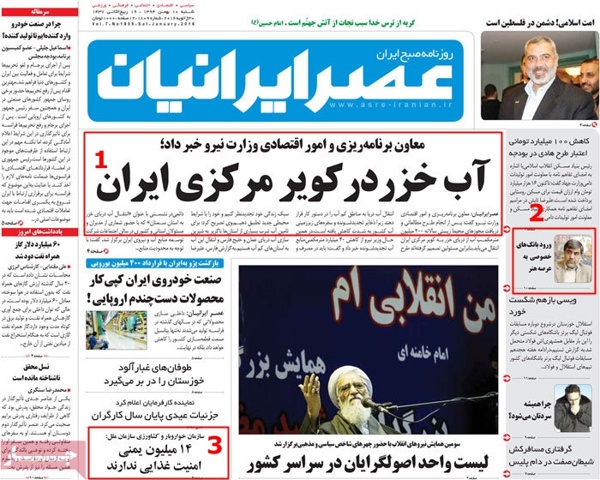 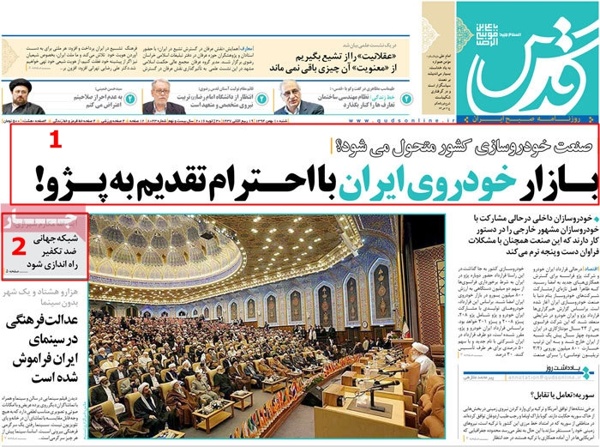 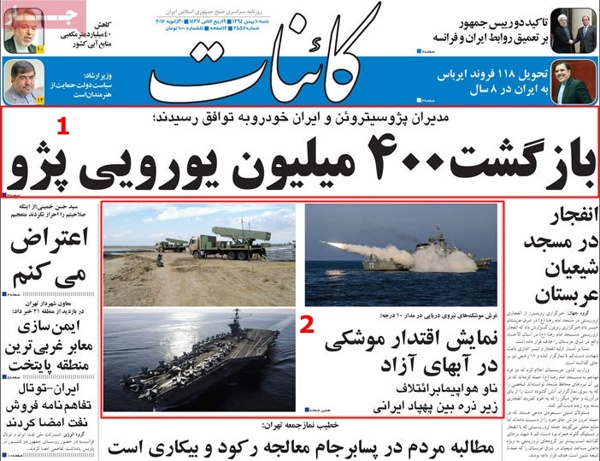 4. We want no parliament where US, EU statement is read: Tehran Friday prayer leader 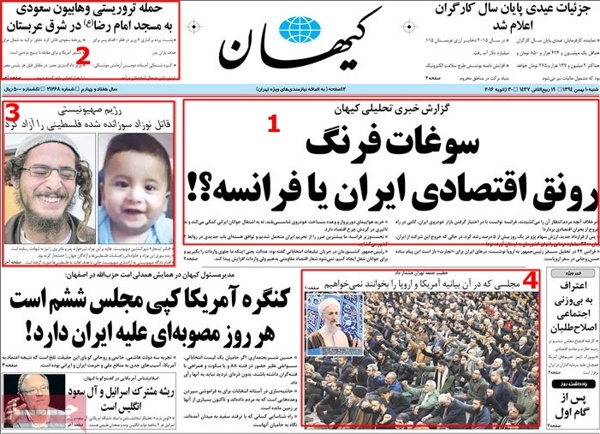 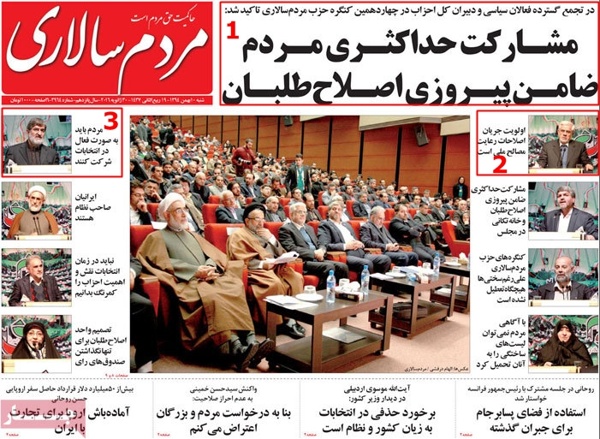 1. “I was startled, will object,” Hassan Khomeini said after he learned he was disqualified to vie for a seat in the Assembly of Experts

2.From the Poor House to the Foreign Ministry
– Is Adel al-Jubeir a CIA choice?

The conference was held by the Principalist factions to choose 30 hopefuls from 190 qualified candidates for the late February parliamentary election. 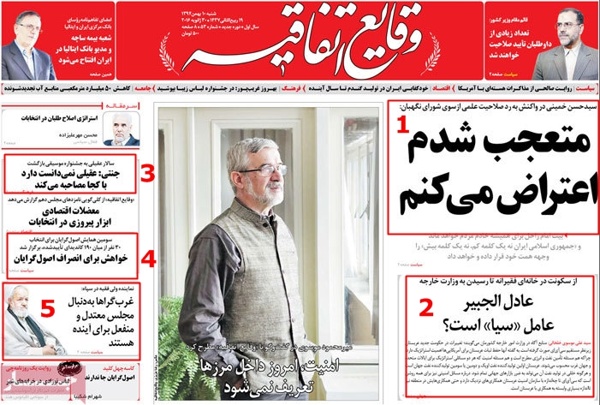 Iran’s Prisons Organization director general Asghar Jahangir said plans are under way to diminish the population of inmates. The initiatives include house arrests and electronic detention of inmates which are being studies for the time being. 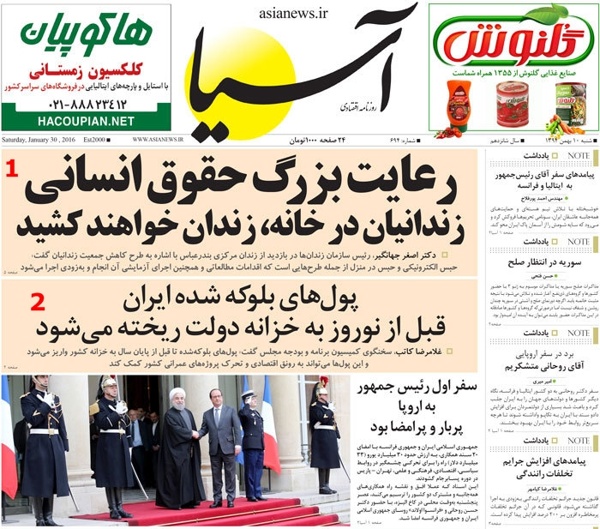