A look at Iranian newspaper front pages on Jan 17 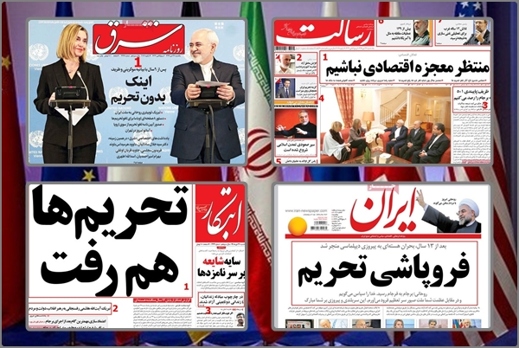 Sanctions imposed on Iran over its nuclear program are lifted following confirmation of Tehran’s commitment to​ Joint Comprehensive Plan of Action by the International Atomic Energy Agency.

Sadeq Zibakalam, an outspoken Iranian intellectual and political commentator, has posted an article on the daily saying that the sanctions relief will not do miracles in Iran’s economy.

3- Who made it to the ballots?

A report on the list of qualified Assembly of Experts candidates.

4- Firms line up to sell planes to Iran

5- Burden of pollution shirked [by state organizations in Iran]

A report on the organizational responsibilities for curbing the choking air pollution of Iran’s mega cities. 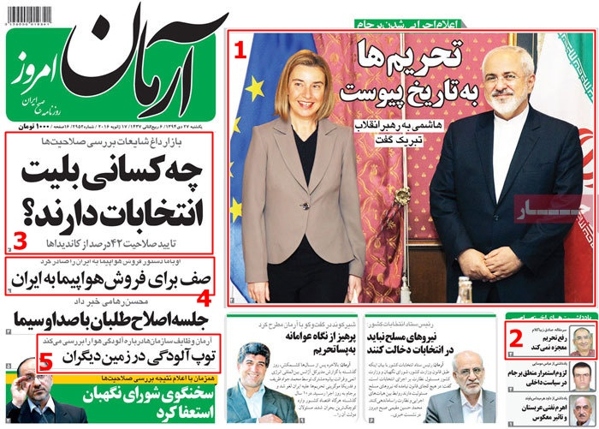 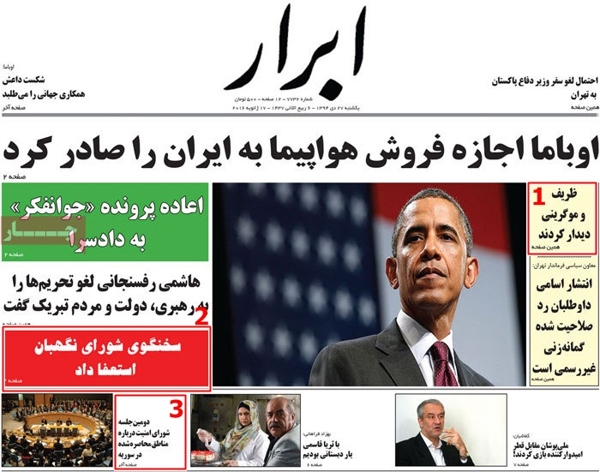 1- Admin’s plan to run Iran out of recession

4- Shell, Total in talks with Iran 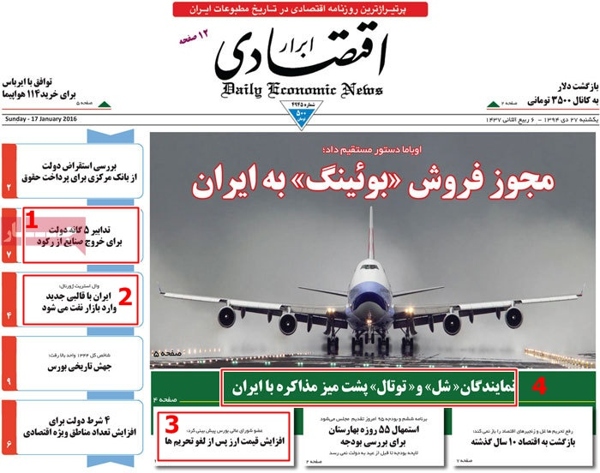 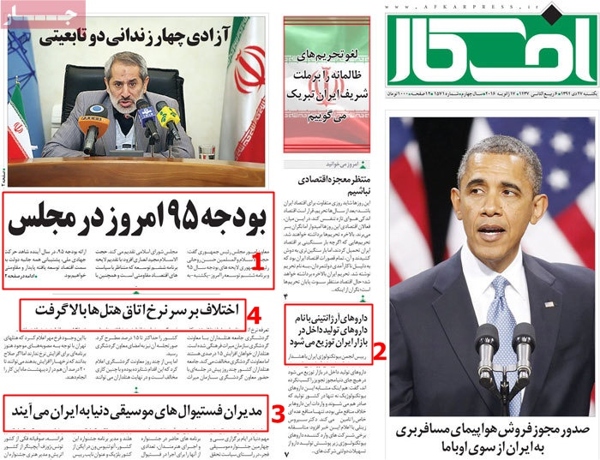 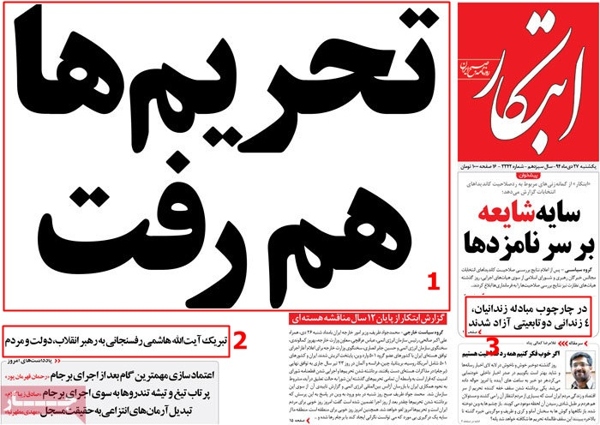 2- Markets on the last days of sanctions 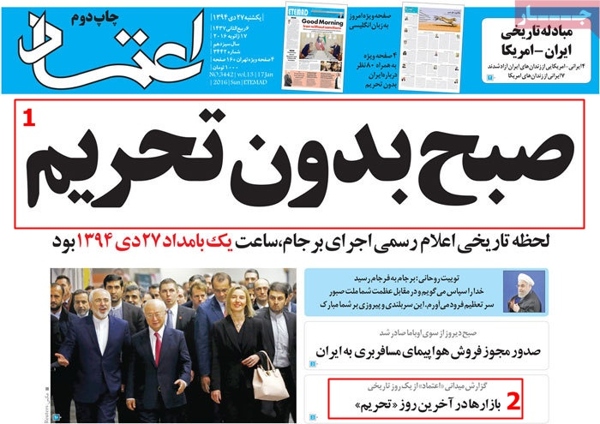 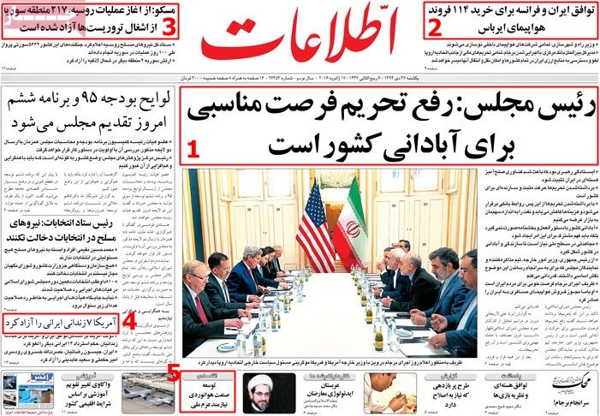 Ostad Homayoun Khorram was an Iranian musician, composer, violinist, and a member of the high council of Iran’s house of music. He died in 2013 but was revered in a ceremony in Tehran on Saturday.

Plans must be adopted to prevent the megacity’s sinking. This may affect railroad network and the subway system. 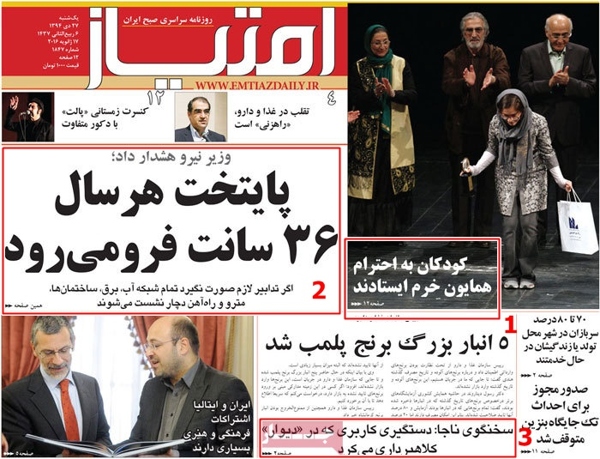 3- $30m US budget for infiltrating into Iran

Head of Iran’s Court of Administrative Justice criticized illegal ownership of lands in river banks across the country. 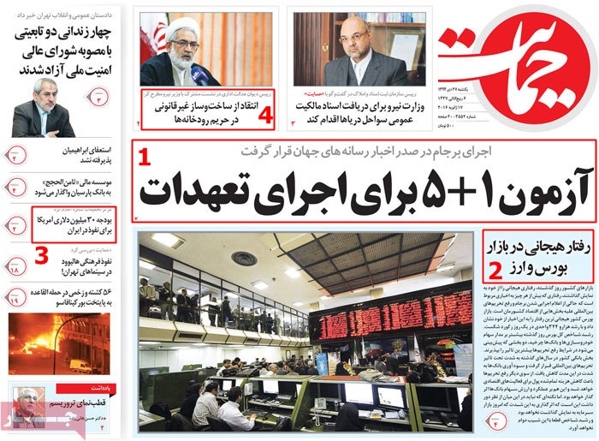 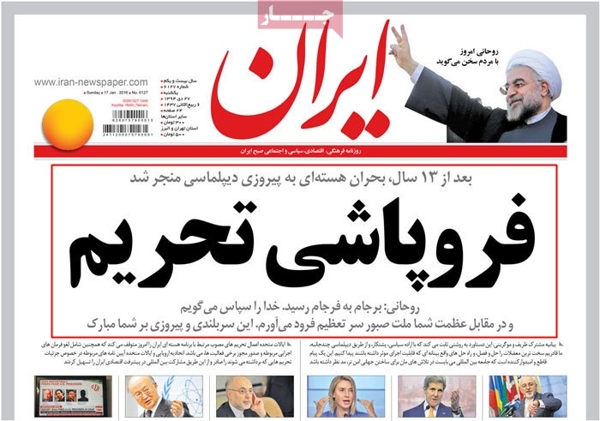 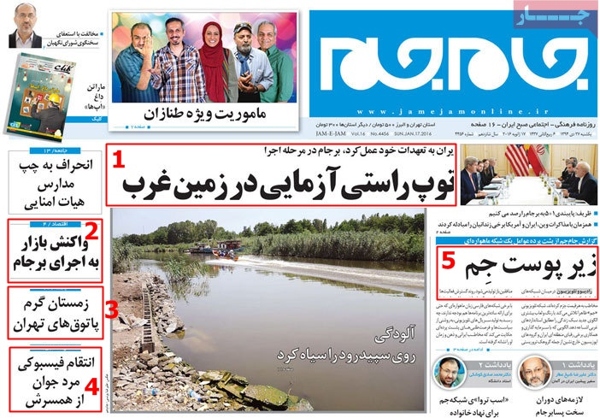 1- Most competitive elections ever

A report on the campaigns by hopefuls of the Assembly of Experts and Parliament elections due next month in Iran. 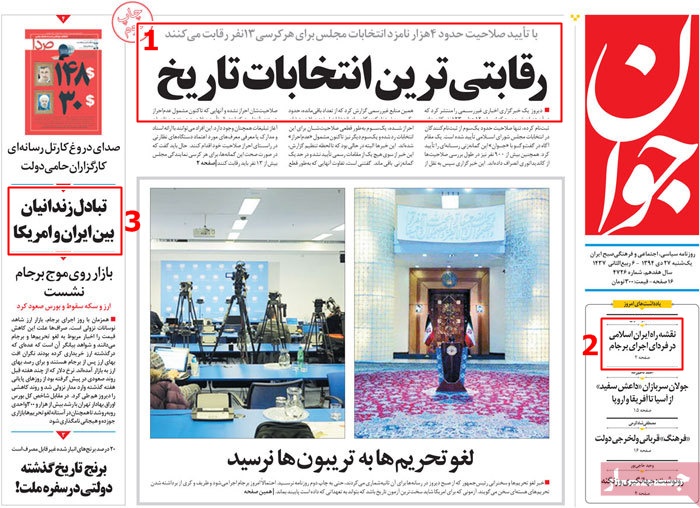 2- No one honors Iran’s avian industry: Minister of Roads 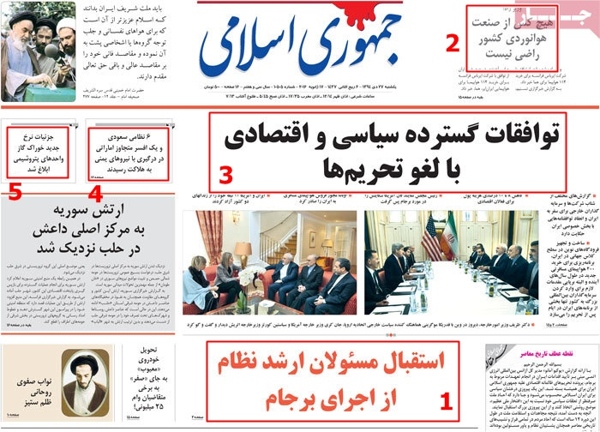 Managing director of Iran Power Plant Projects Management Company (MAPNA) said the Iranian administration’s only guarantee for foreign financiers in the country is the return on their investments.

A report by Keyhan on a disastrous bill. 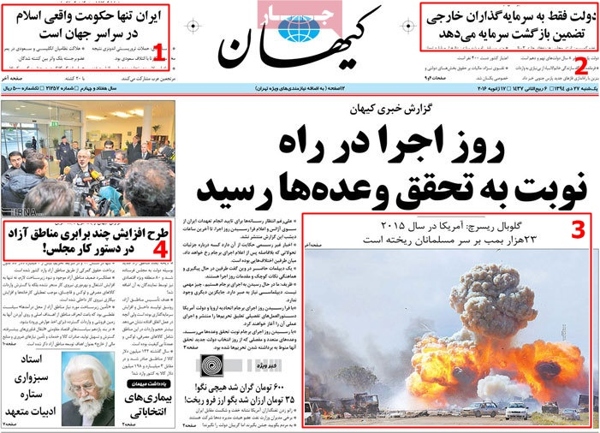 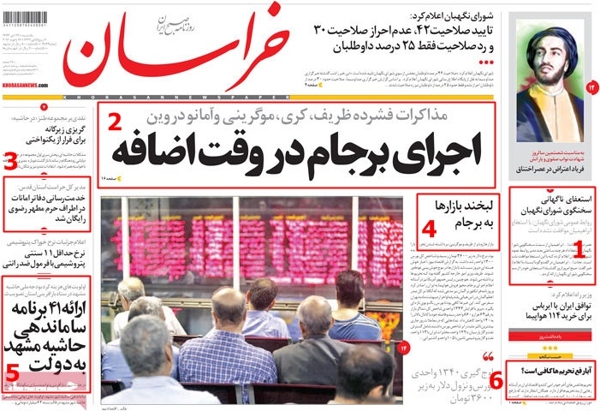 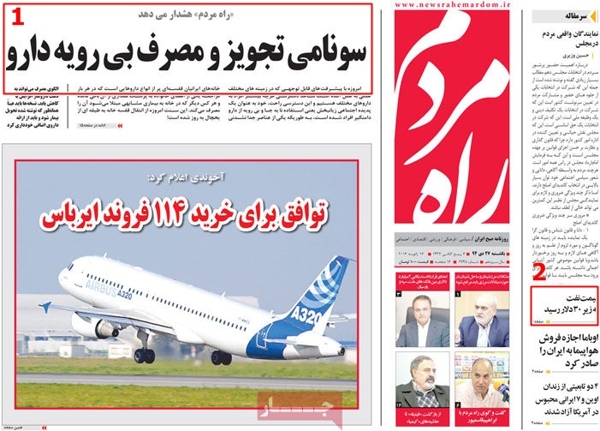 1- No economic miracle under way: economists

6- Over 139 retaliatory operations against US: Iran Cmdr

IRGC Navy Commander Brigadier General Ali Fadavi said Iran has carried out more than 139 retaliatory operations against the US. 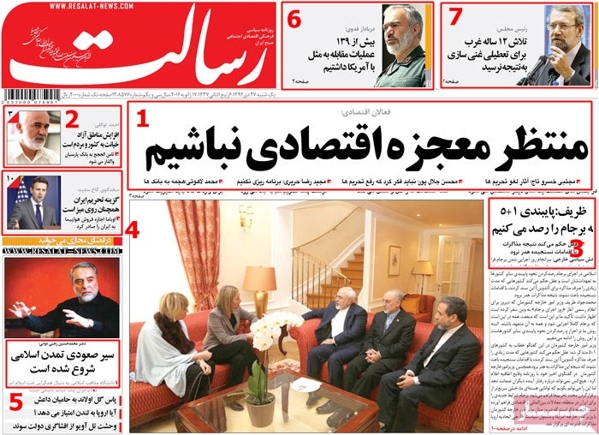 3- Fall in Fedowsi (Iran market for gold and foreign exchange); rise in Hafiz (a street in Tehran where the stock market is located)

4- Zarif in Kerry meeting: The job is done

A good day for everyone 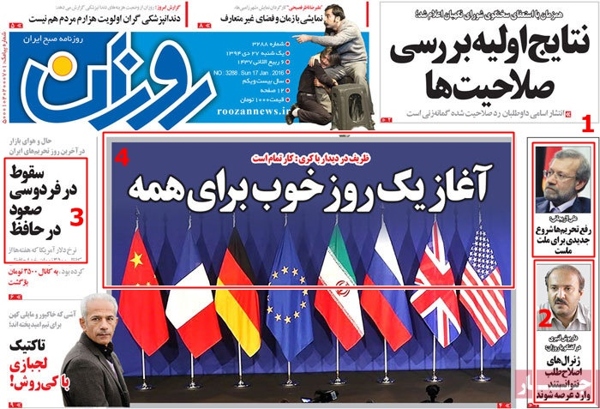 1- US State Department: Lifting of sanctions our top commitment

2- No hurries needed for Yemen talks 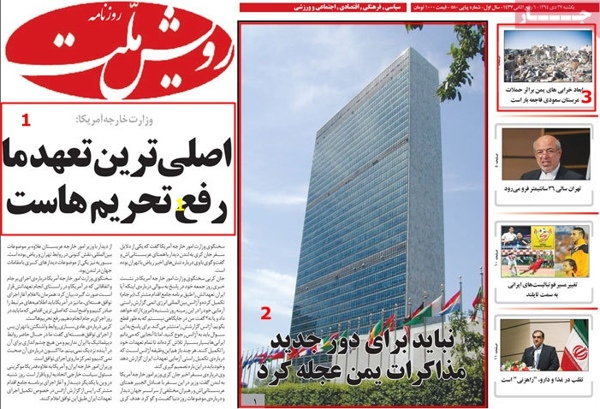 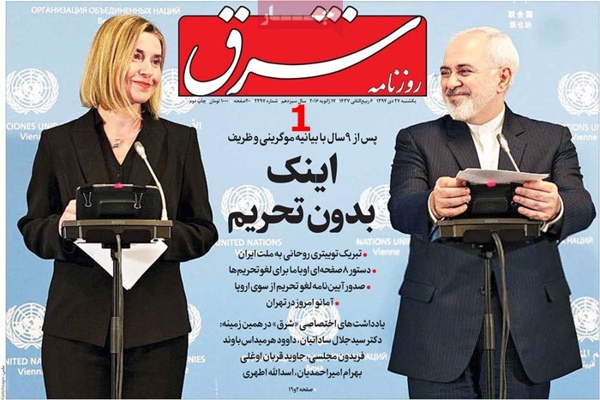 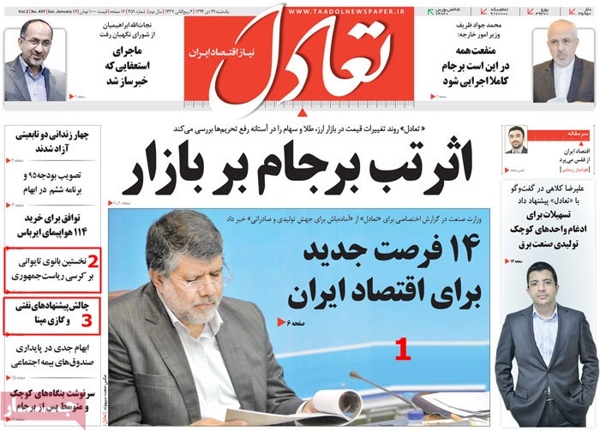