A look at Iranian newspaper front pages on Jan 16

IFP has taken a look at the front pages of newspapers on Saturday and picked headlines from 26 of them. IFP has simply translated the headlines and does not vouch for their accuracy.

As clock ticks for lifting of US-led sanctions on Tehran’s nuclear agenda, the Iranian nation prepares for the post-sanctions setting. The news of sanctions relief on Monday grabbed almost all the country’s press headlines on Saturday, January 16, 2016.

The following are the highlights of the press on Saturday:

4- Putin, Obama call for de-escalation of tensions between Saudi Arabia and Iran

6- Normalization of Tehran-Riyadh relations not a short-term possibility: professor 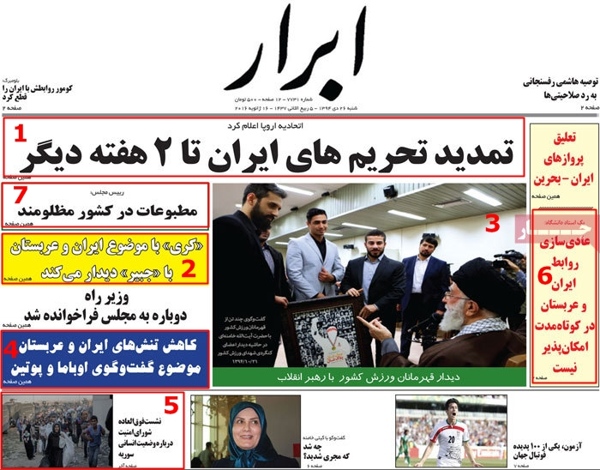 – Severing ties with Iran is playing the victim: Leader Advisor 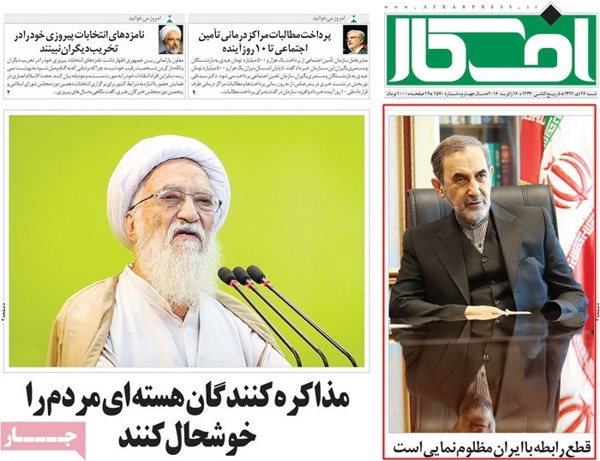 – Assembly of Experts hopeful: We have no way but to count people in

Seyyed Hassan Khomeini (grandson of Imam Khomeini, leader of the Islamic Revolution) who is a prominent candidate for the upcoming Assembly of Experts election, said, “We must learn from the past,” and cautioned those who brag about democracy against defying the regulations. 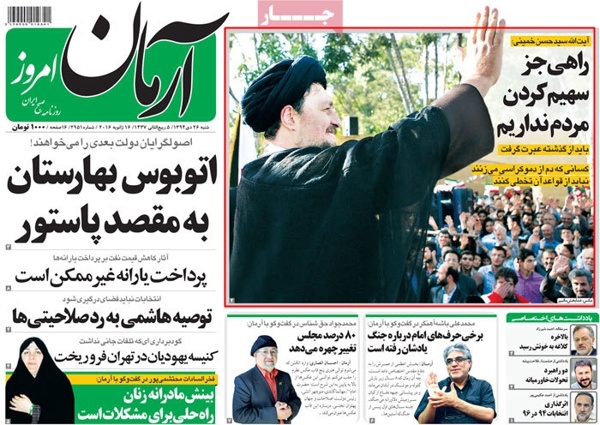 Iran’s Labor and Social Welfare Minister Ali Rabiei said the Welfare Organization is a chief pillar of the administration’s welfare policies and plans are under way to provide social insurance for all Iranian citizens by the administration. 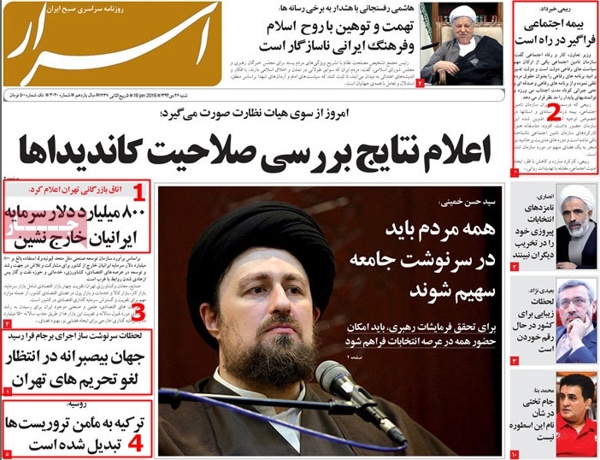 4- Phase III of campaign to clean Tehran of addicts 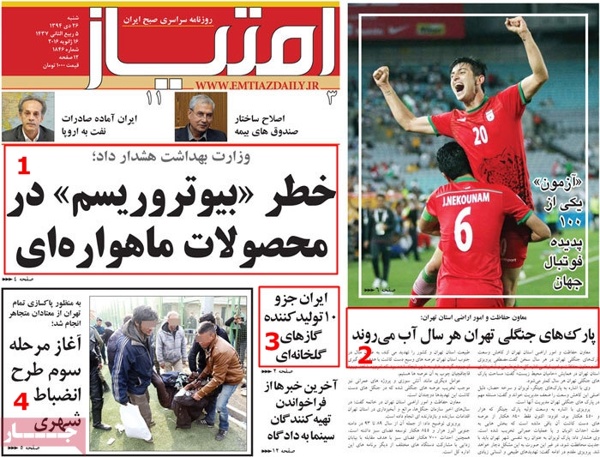 Two historic events are scheduled to take place on January 16 in Iran; one will be implementation of Iran’s nuclear deal and the second one will be announcement of the qualified candidates for the upcoming Assembly of Experts election.

The Chinese President Xi Jinping will visit Tehran on January 22 for the first time since 2002 that a Chinese president travelled to the country.

3- Expediency Council Chief: Disqualifications shall not fed up anyone 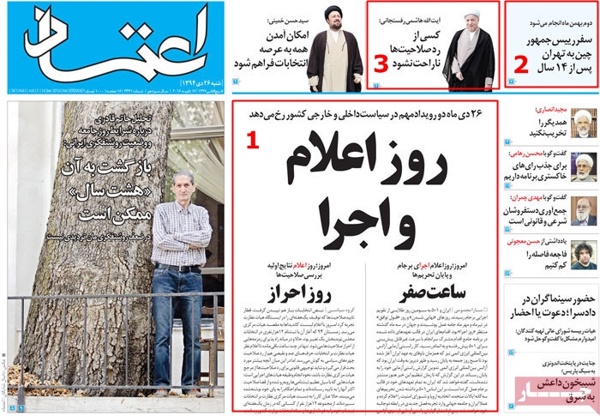 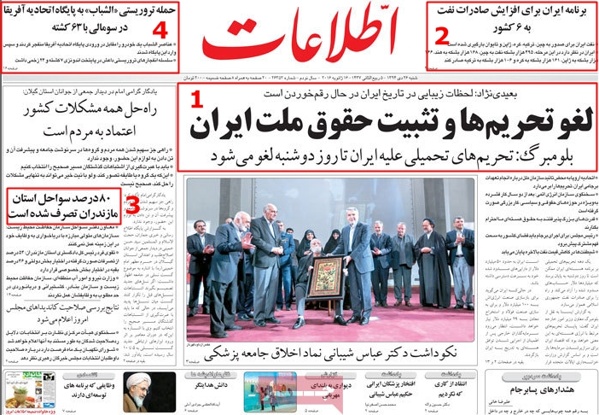 2- Iran gold mine for Italy 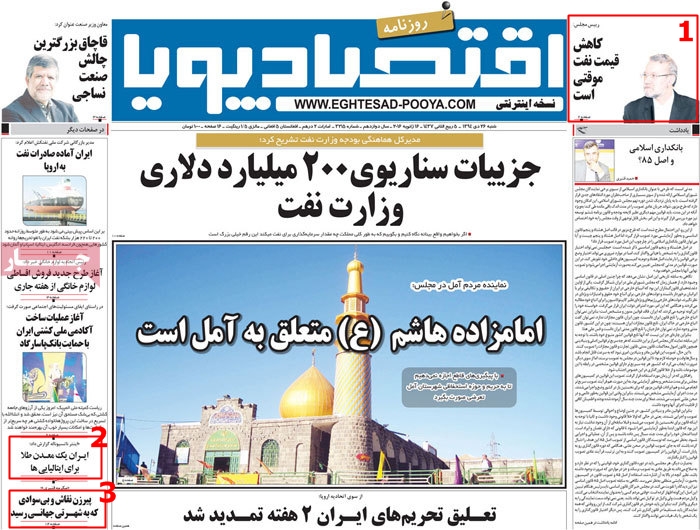 1- US humiliated in Persian Gulf: Reports

2- King Salam may hand over reign to son

4- Iran, US FMs to meet in Geneva, Saturday 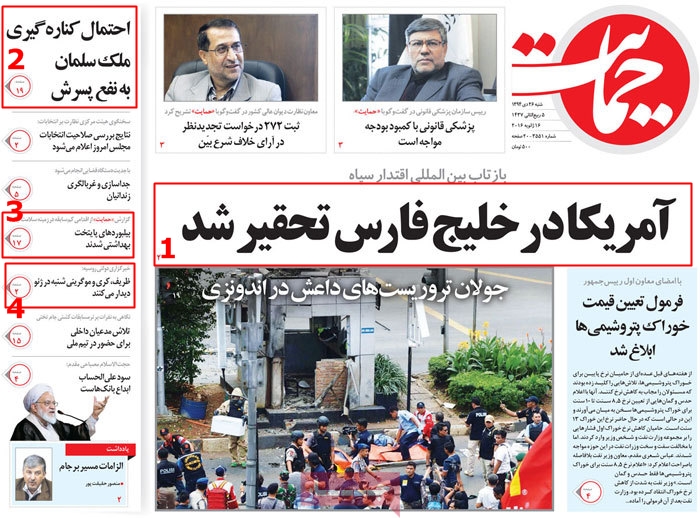 Illegal land owners have occupied more than 80% of the coastal lands of the Caspian Sea in Iran. 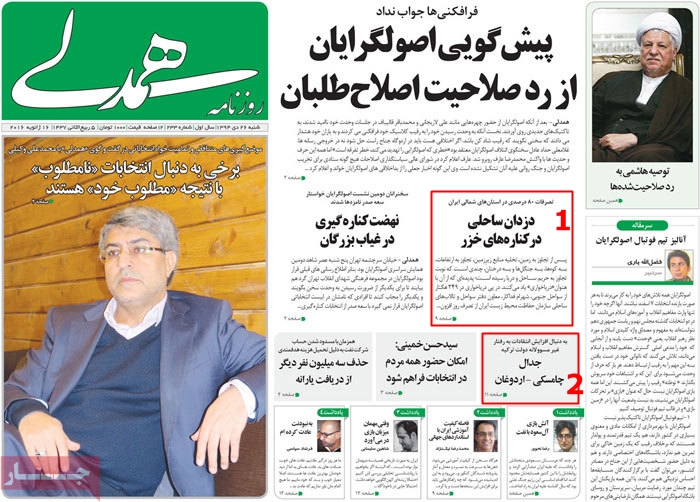 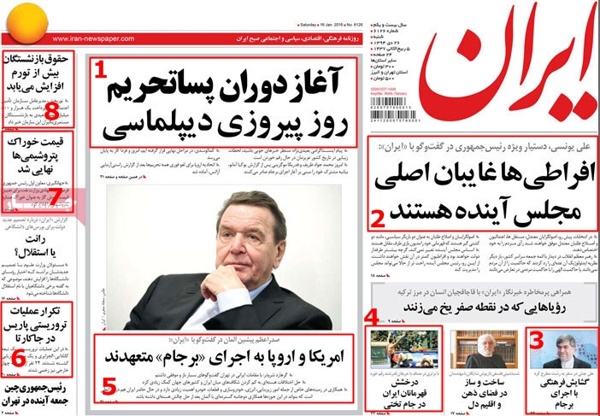 A report on the risks of consuming health products and cosmetics promoted by satellite channels. 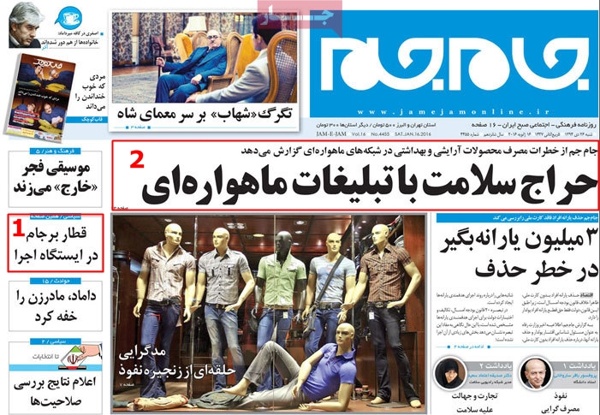 1- Time to hold out JCPOA vows

2- 11 anti-Iran initiatives line up for US Congress passing 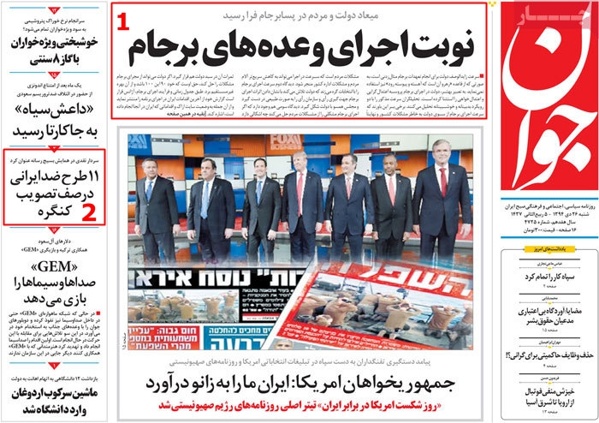 1- Veteran doctor to be honored

A ceremony will be held at the National Library of Iran to honor Dr. Abbas Sheibani, the first president of the Islamic Republic of Iran Medical Council (IRIMC) after the 1979 Islamic Revolution. 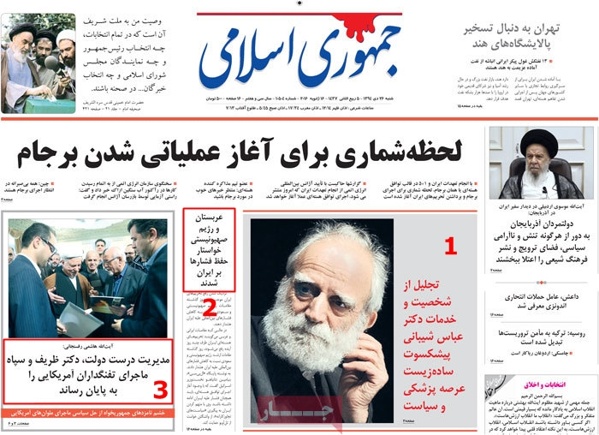 A report on the occasion of the anniversary of the day the last Shah of Iran, Mohammad Reza, fled from the country. 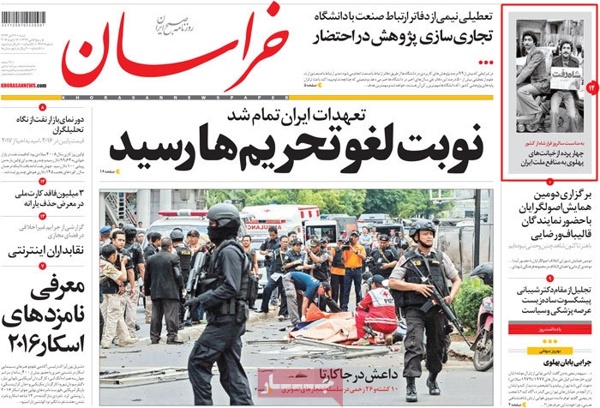 2- Editorial: Let’s not make US face up 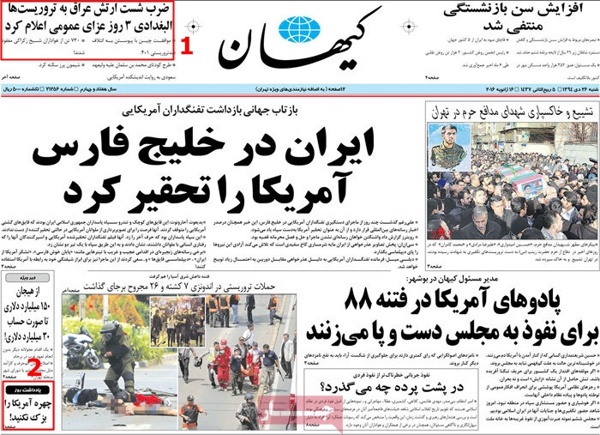 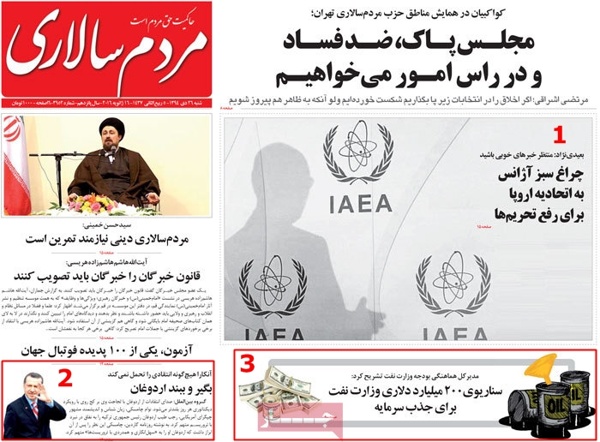 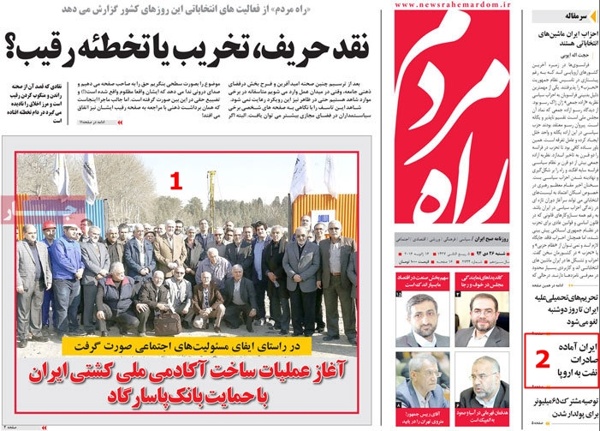 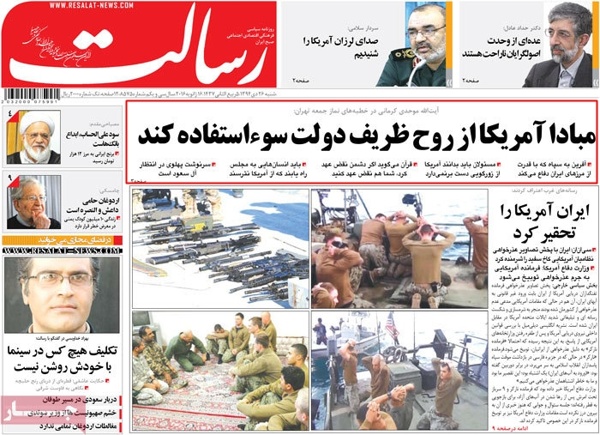 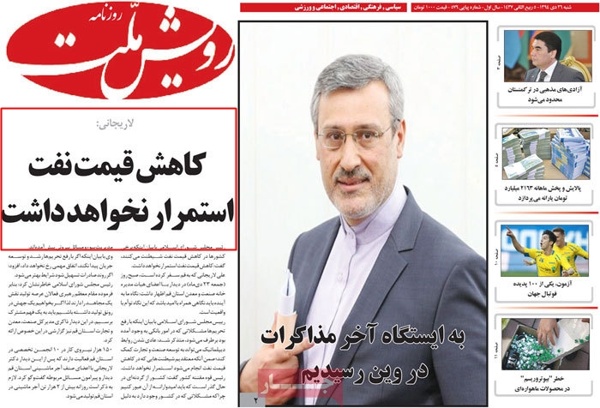 1- 20% of textile industry in need of renovation 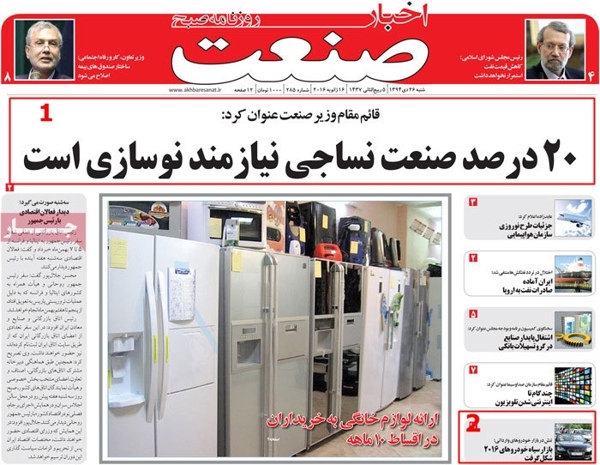 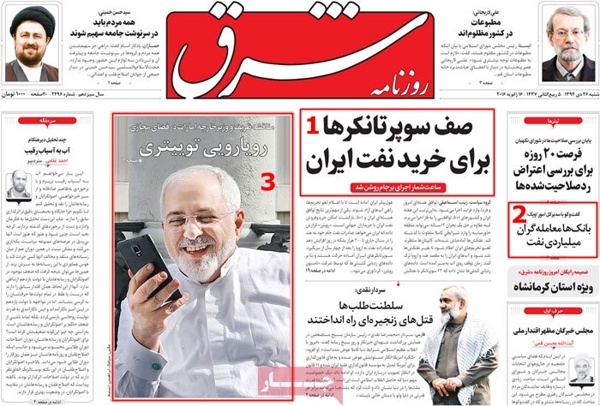 – DiCaprio spell to be smashed 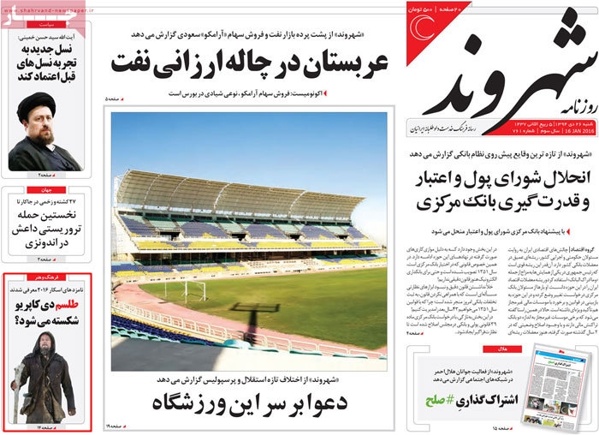 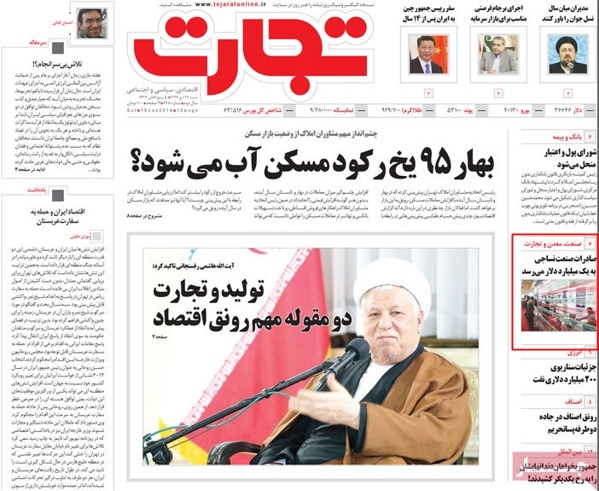 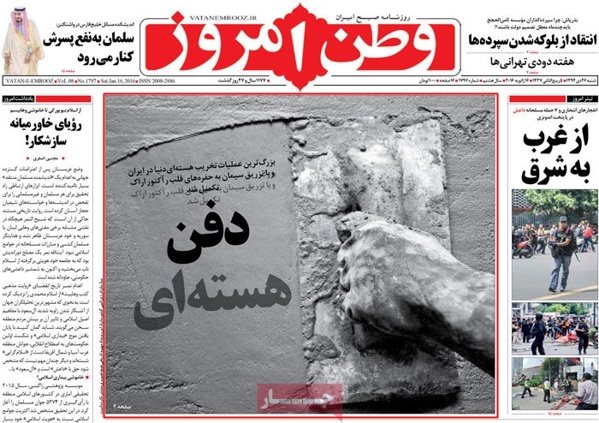 Zarif: I cannot be compared with Mossadeq

Mohammad Mossadeq was an Iranian politician who was at the helm of Iran’s nationalization campaign in the 50s against the UK. 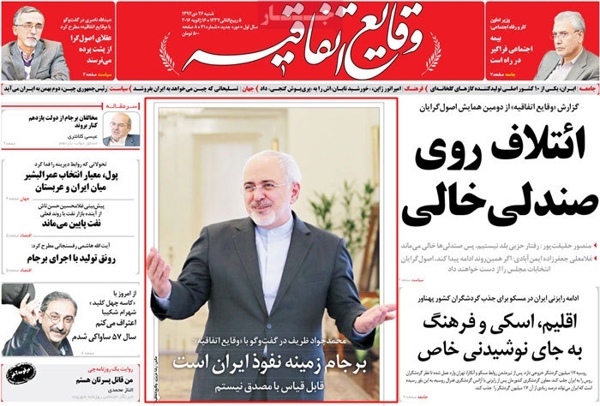