A look at Iranian newspaper front pages on Jan 10

The Supreme Leader’s urges to even his dissenters to take part in the upcoming elections and the issue of the Saudi embassy attack in Tehran grabbed most of the headlines on Sunday, January 10, 2016. Besides, the capture of a number of senior officials with the Iranian Offshore Oil Company was also considered by a number of dailies. The executives are detained on numerous charges like graft, embezzlement and tax evasion. 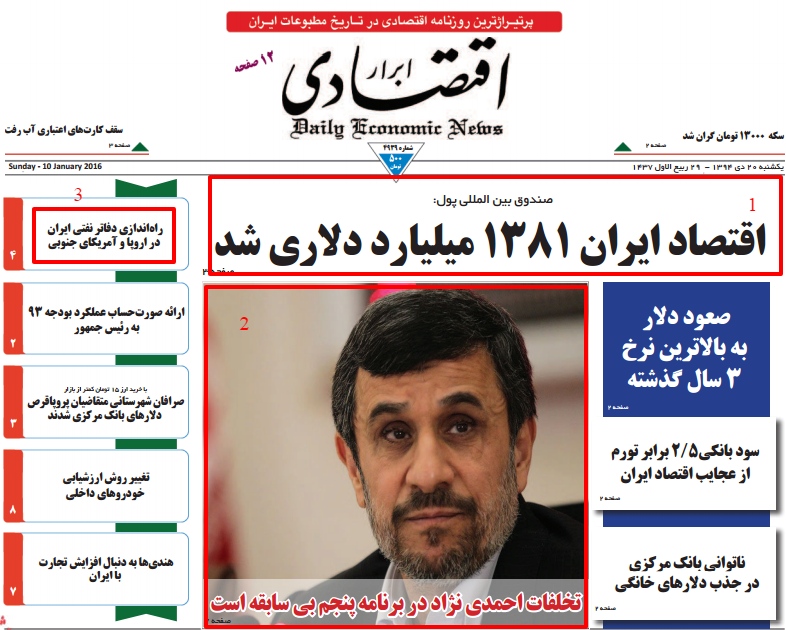 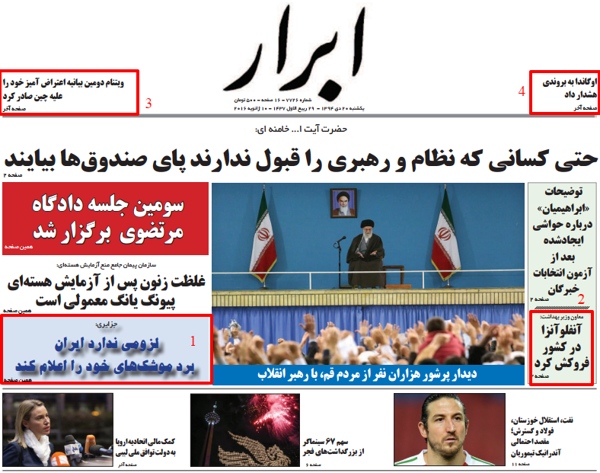 Aftabeyazd:
1. The Russian silence
Aftabeyazd’s report on Russia’s inaction to support Iran as the Tehran-Riyadh chasm grows deeper
2. MP prays oil prices will plunge to $2/b 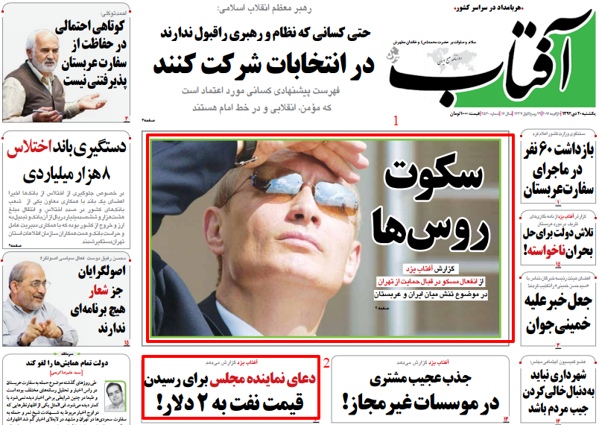 Arman-e Emrouz:
1. Only one list of reformist candidates: ex-vice president
Mohammad Reza Aref, a former reformist vice president, says reformist parliamentary candidates should refrain from presenting several candidate lists.
2. “I am happy with the large number of candidates:” spokesperson
Spokesperson of the Guardian Council said being absent in the Assembly of Experts’ exam does not disqualify a hopeful, [referring to the absence of the grandson of Imam Khomeini, the founder of the Islamic Revolution, Hassan Khomeini, in the exam.
3. Restoring power: nightmare or reality
Ahmadinejah waiting for a chance 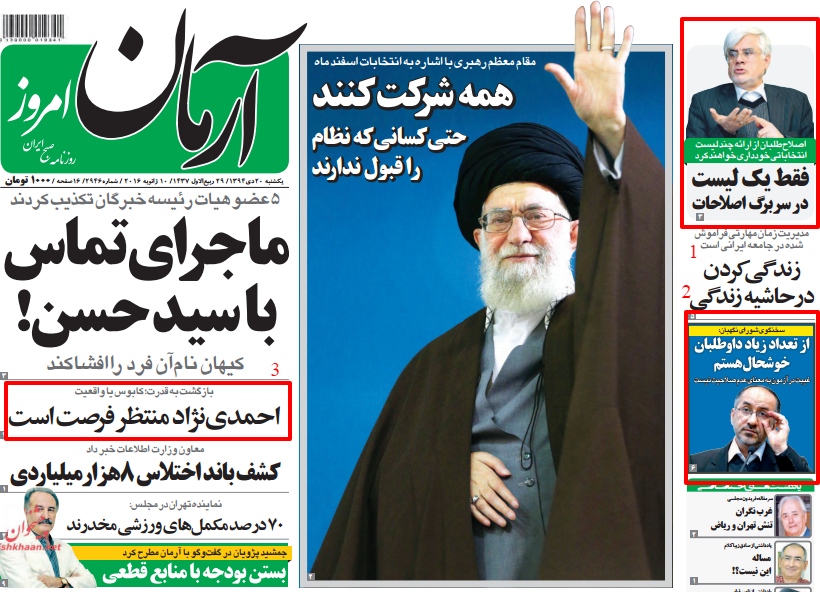 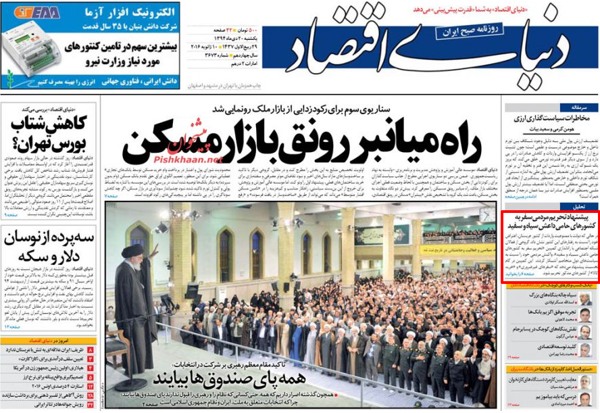 Ebtekar:
1. Leader urges everyone to vote
The Leader of the Islamic Revolution calls on all the citizens eligible for voting to take part in next month’s parliamentary and Assembly of Experts elections.
2. Zarif to UN: Iran not keen to add fuel to tensions with its neighbors
In a letter to the U.N. Secretary-General Ban Ki-moon, Foreign Minister Mohammad Javad Zarif described the rising tension between Iran and Saudi Arabia as “deplorable”. 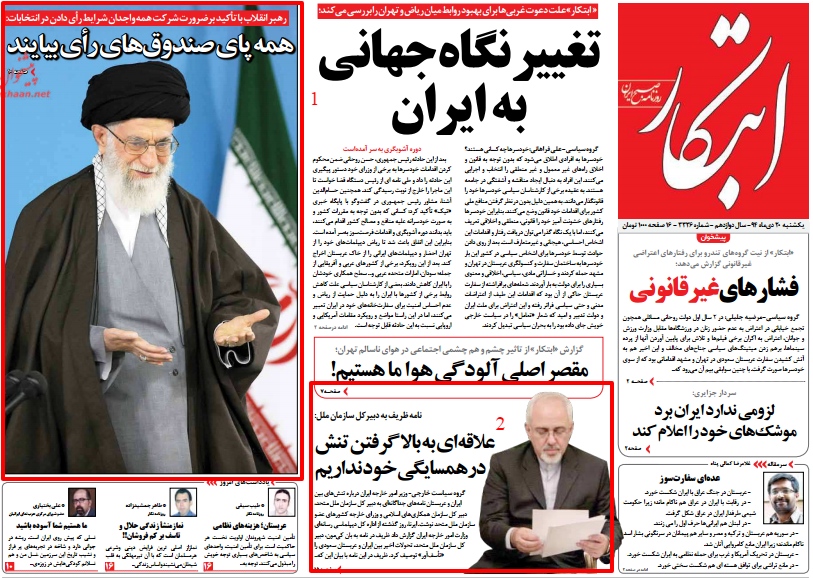 Etemad:
1. Leader urges even those against him to vote
“As before, we insist everyone, even those who don’t believe in the system and the leadership, come to the ballots, as the election belongs to the nation, and the system,” the Supreme Leader said in a speech to thousands in Tehran.
2. Guardian Council Spokesperson:
Women Allowed in Assembly of Experts 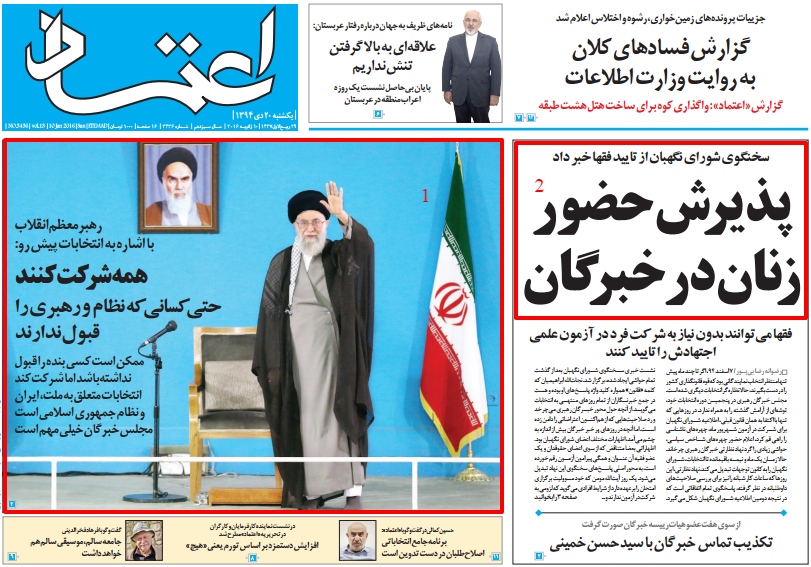 Ettela’at:
1. Iran Leader to Thousands in Qom:
Informed presence in elections brings about permanence of the Revolution, peace and victory
The leader said: Even those who do not approve of the establishment and the leadership should come to the ballots.
2. Zarif: Saudi has to choose between sectarian hatred or good neighborliness
Iranian Foreign Minister Mohammad Javad Zarif sent a letter to the UN Chief in which he slammed Saudi Arabia role in igniting sectarian strife in the region.
3. Inequality worse than poverty in society: Iranian Economist 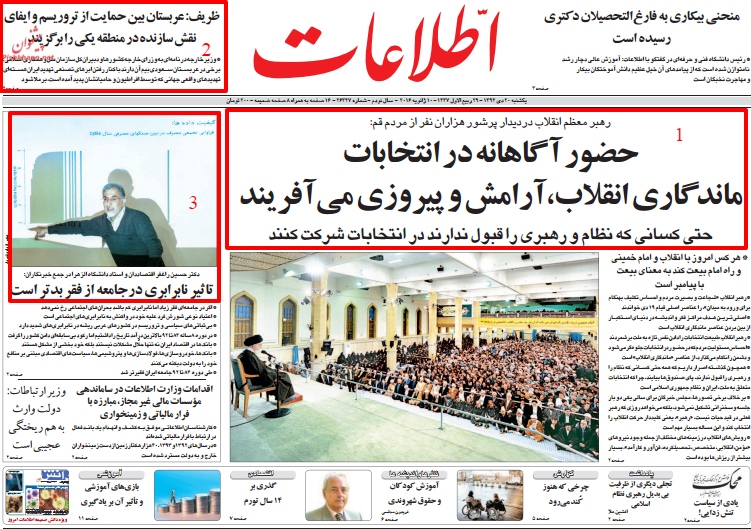 Iran:
1. In a rare cultural move:
Statesmen watch play on Amir Kabir’s life
2. Screening qualities of the test absentees
Guardian Council spokesperson said the council’s experts are screening the scientific qualities of those hopefuls in the Assembly of Experts election who missed a test to determine their scientific level.
3. Embassy attackers handed over to judiciary: police chief 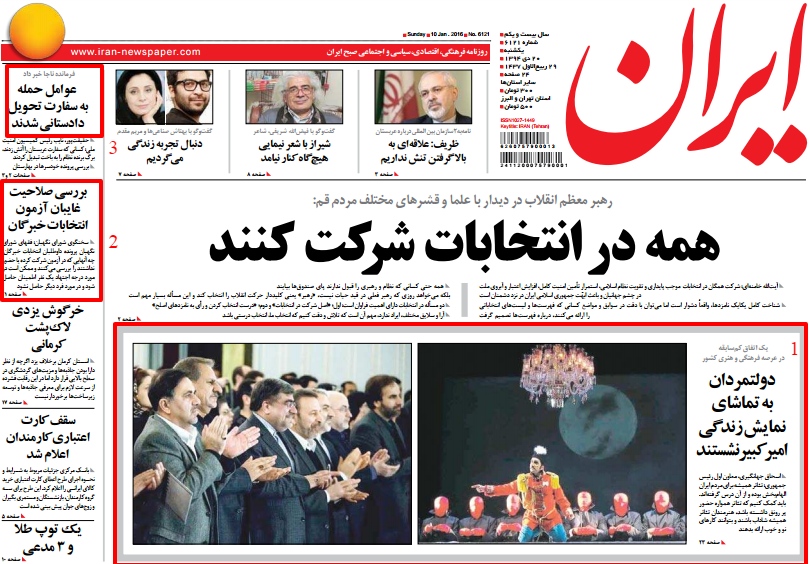 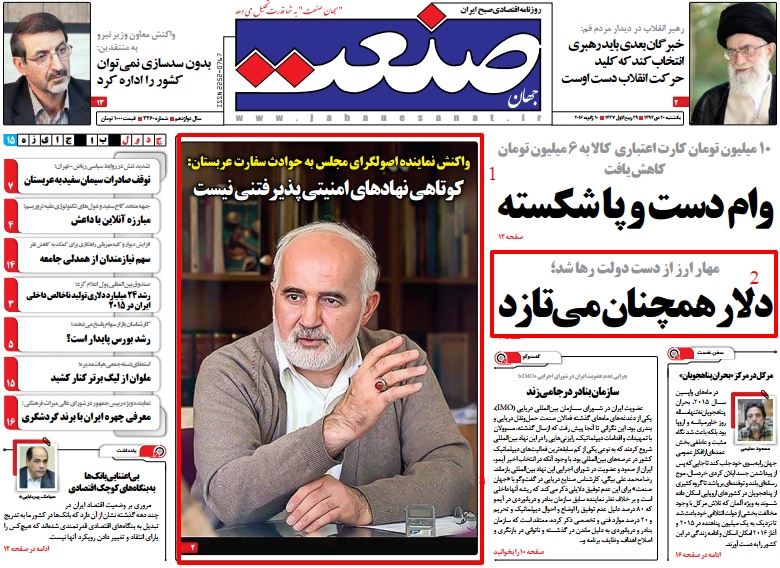 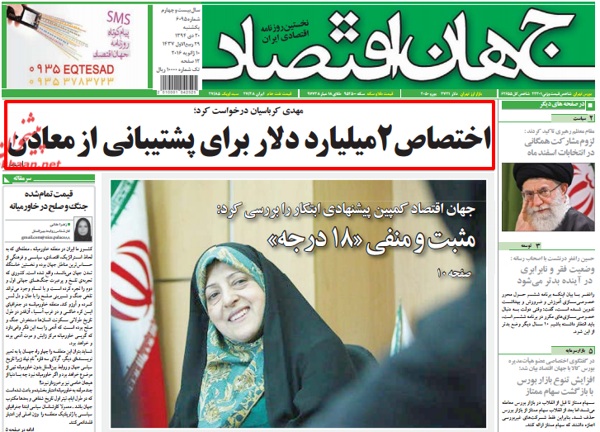 Javan:
1. Leader: People foiled 2009 color coup
Speaking to thousands in Tehran, the Leader said: Americans say the period following the nuclear talks will be a period of being strict to Iran.
2. UN: Use of cluster bombs, heinous war crime
Confessing Saudi war crimes after 10 months
3. IOOC managers detained
Deputy minister of intelligence said three of the Iranian Offshore Oil Company executive have been detained on a number of charges. 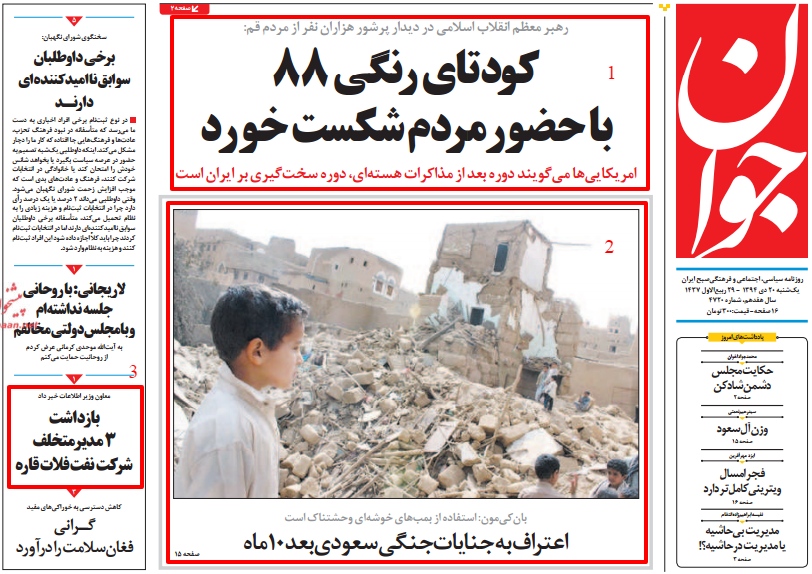 Keyhan:
1. Leader to people of Qom:
List of those who side with the US is not reliable
People foiled 2009 color coup: Leader
2. Trump vows US support as long as Saudi dollars are available 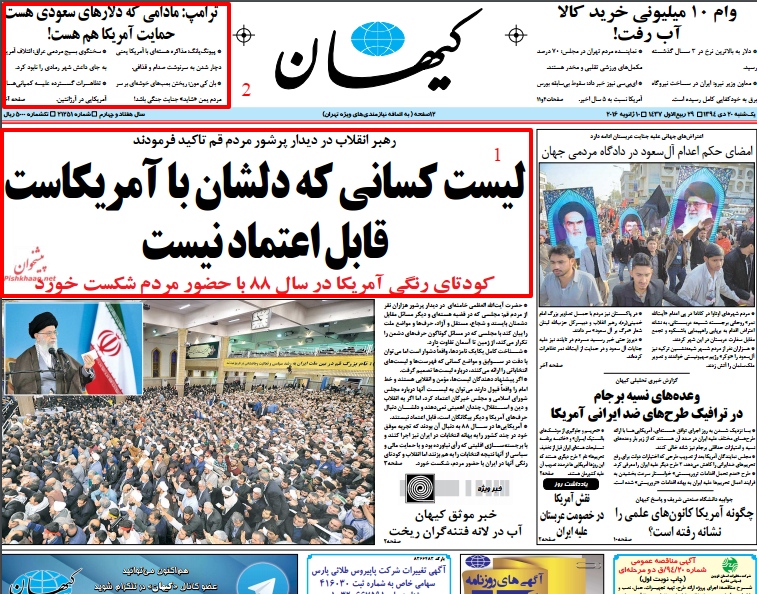 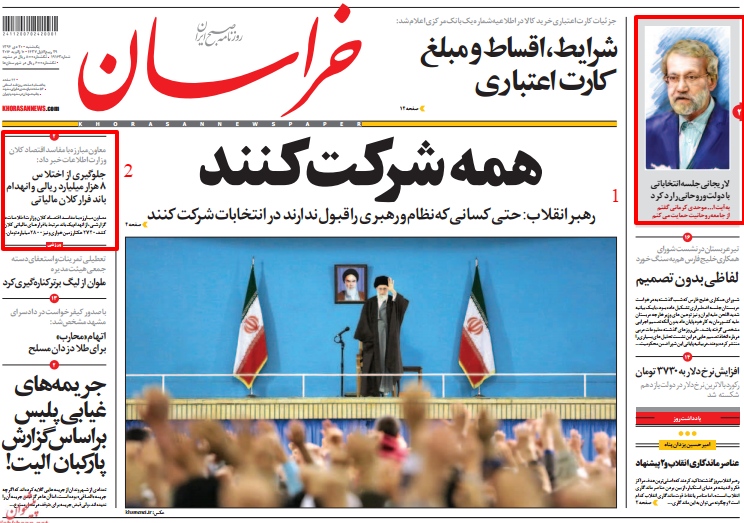 Zarif said in a meeting with China’s Vice Minister of Foreign Affairs Zhang Ming in Tehran on Saturday. 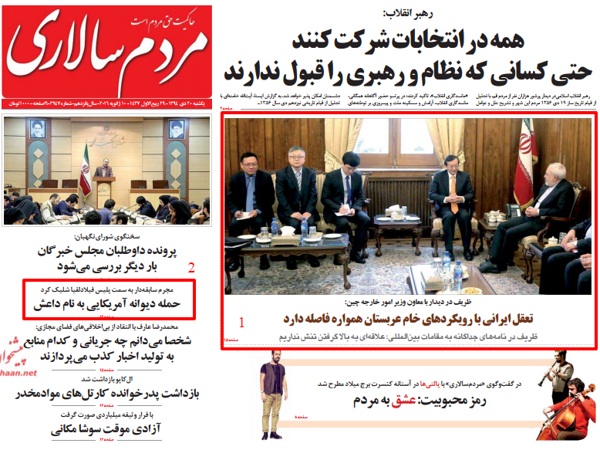 Resalat:
1. Iran to decide if JCPOA violated: Shamkhani
The secretary of the Supreme National Security Council has said Tehran does not care what others say and will continue to boost its deterrence.

2. Not taking the exam does not disqualify attendees: spokesman of the Guardian Council said referring to the exam held recently in the central city of Qom to examine Assembly of Experts hopefuls. A number of prominent hopefuls missed the exam. 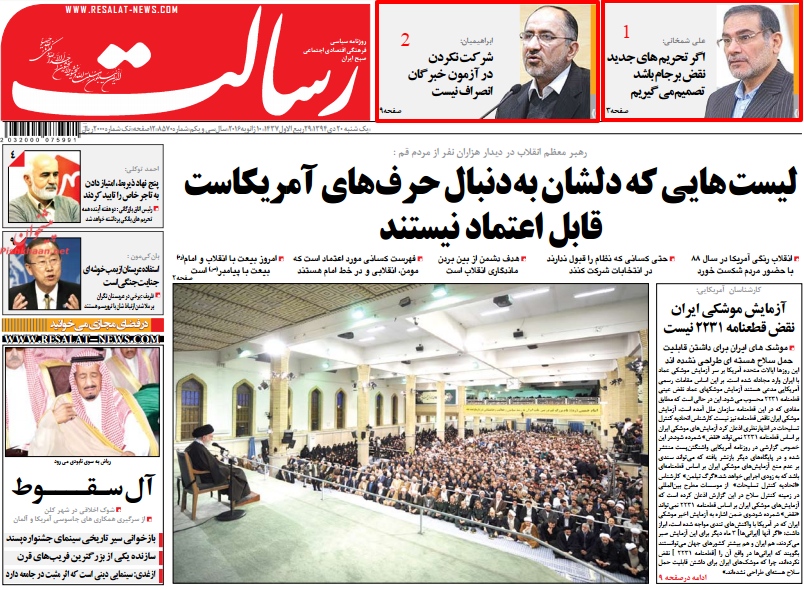 2.     US seeking to take advantage of Iran-Saudi Arabia tensions 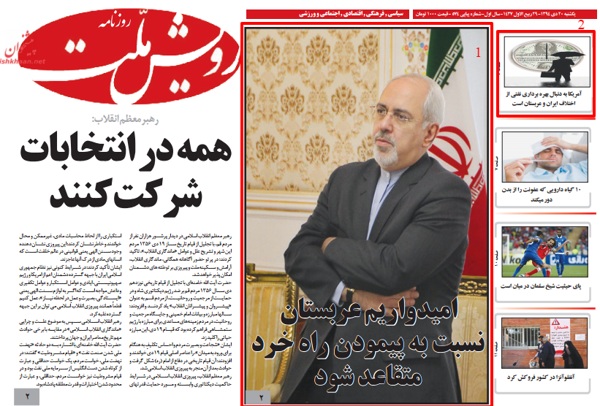 Iranian benefactors have constructed 4,500 health care centers across the country. 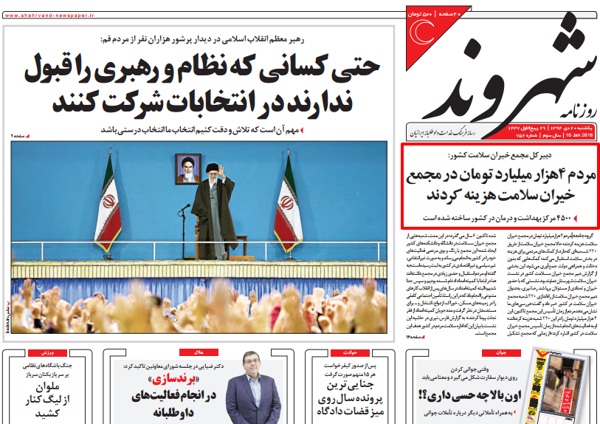 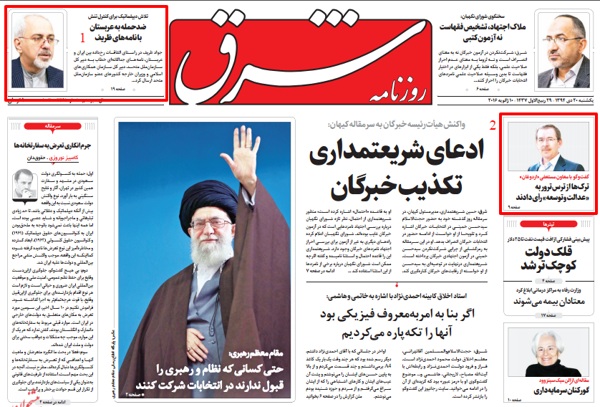 – Iran: Saudi raid on Iran embassy in Yemen will be responded 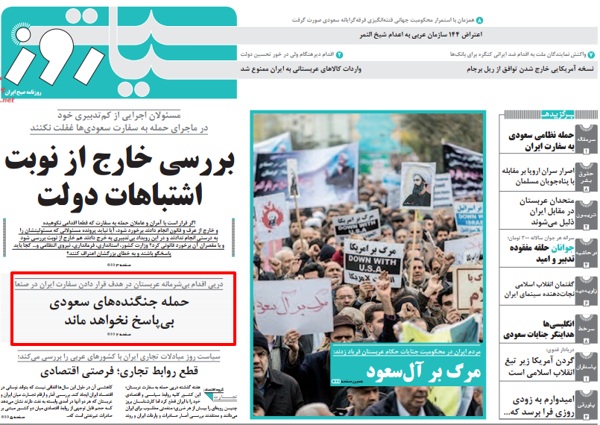 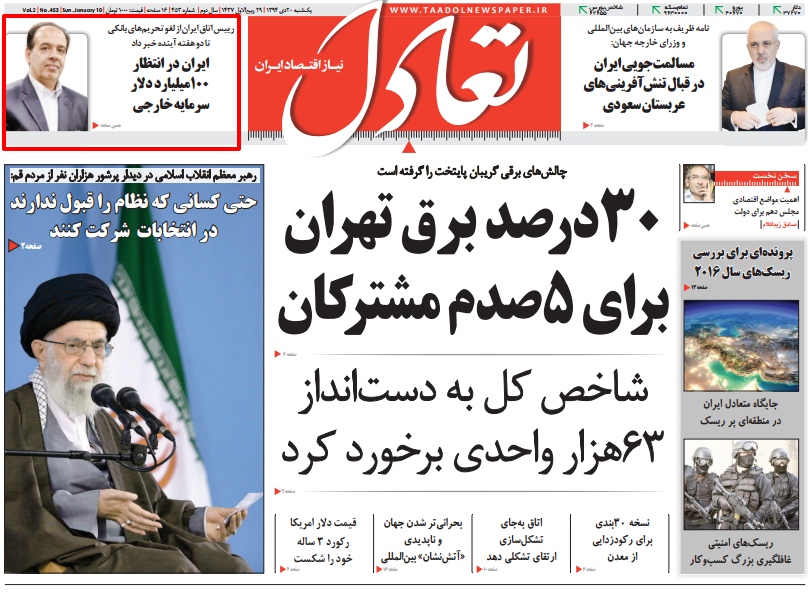