A look at Iranian newspaper front pages on Feb 9

IFP has taken a look at the front pages of Iran newspapers on Tuesday and picked headlines from 22 of them. IFP has simply translated the headlines and does not vouch for their accuracy.

The €6.5bn European investment in Iran’s mining industry was one of the top headlines in most Iranian papers on February 9, 2016. The Leader of the Islamic Revolution, Seyyed Ali Khamenei, had a meeting with Air Force pilots on Monday, and also outlined his stance regarding current developments, including the late February elections. Once again, the leader called on every Iranian citizen to come to the polls. He also spoke about the anniversary of the victory of the Islamic Revolution, saying that the nation’s unity guarantees the mission of the revolution. All Iranian dailies focused on this on Tuesday.

On Monday, the Iranian President Hassan Rouhani honoured the diplomats who spent more than two years of their career working on the nuclear talks which culminated in the signing of the Joint Comprehensive Plan of Action (JCPOA), which resulted in the lifting of the crippling sanctions on the country. During a ceremony, Rouhani granted the diplomats, including Minister of Foreign Affairs Mohammad Javad Zarif, a medal of honour for their endeavour and achievements regarding the nuclear issue. Some dailies, however, criticized the move, saying the negotiating team gave away much more than it gained. 1-Badge of honor for JCPOA diplomats
2-Leader: Being with people ensures their support 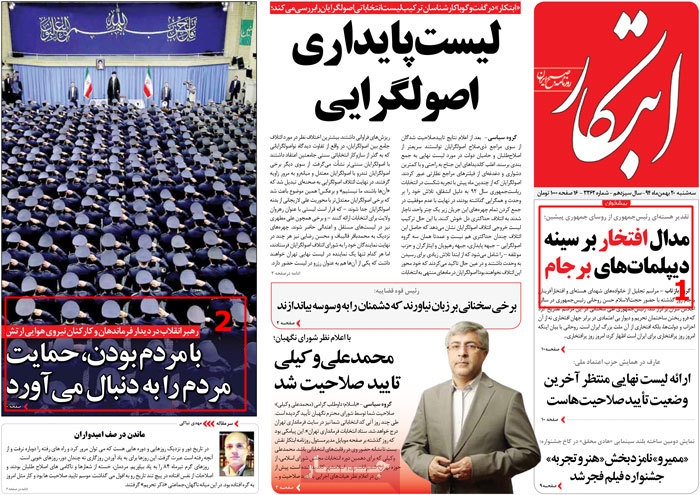 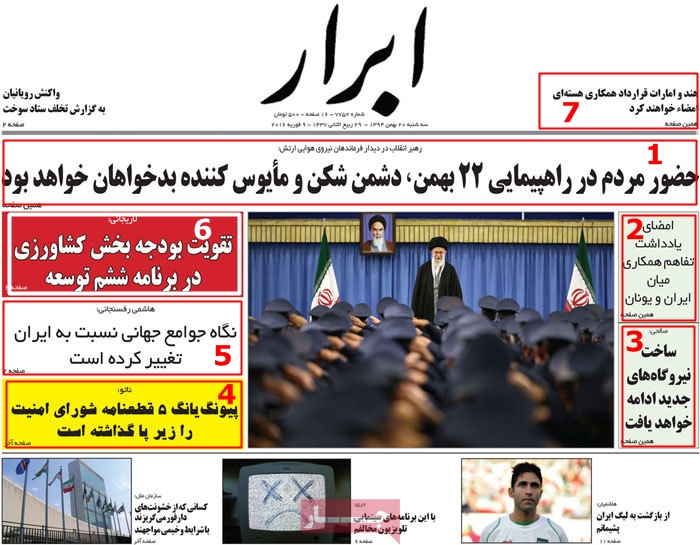 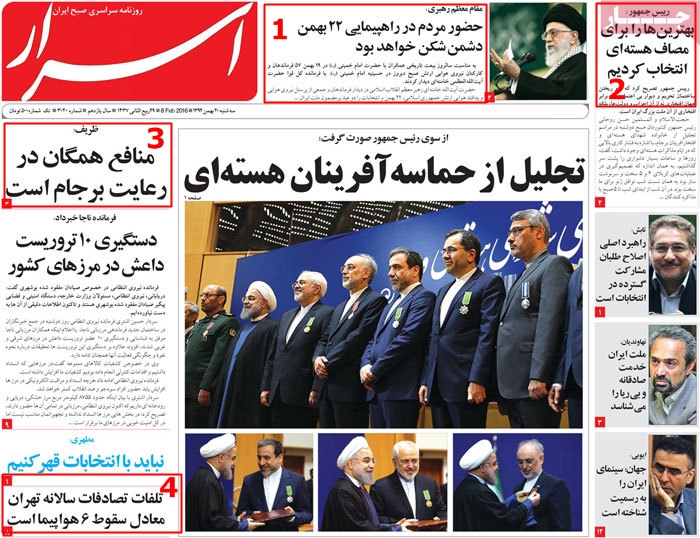 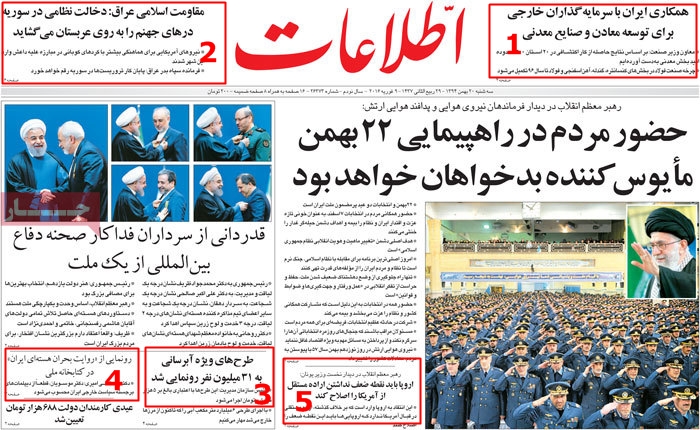 Leader: Voting at ballot boxes is an Islamic duty for all 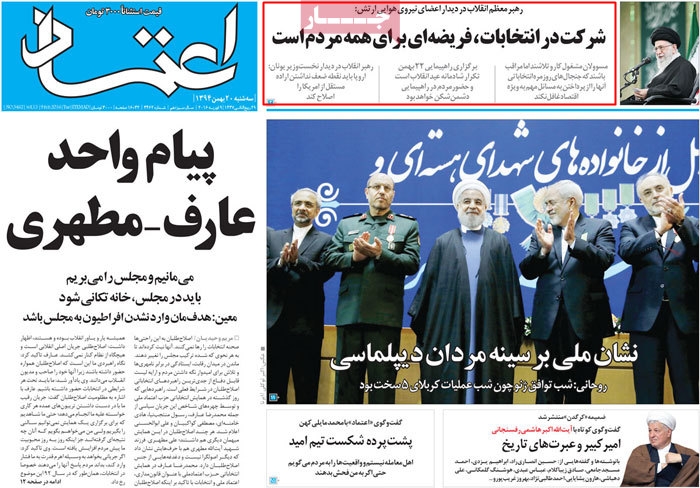 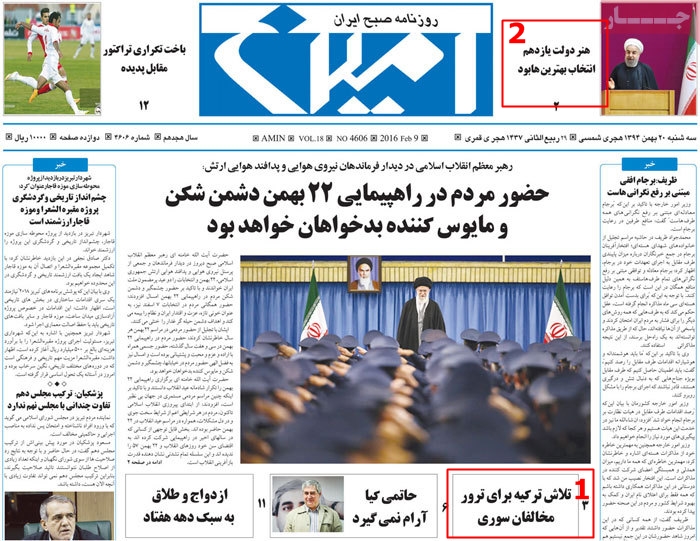 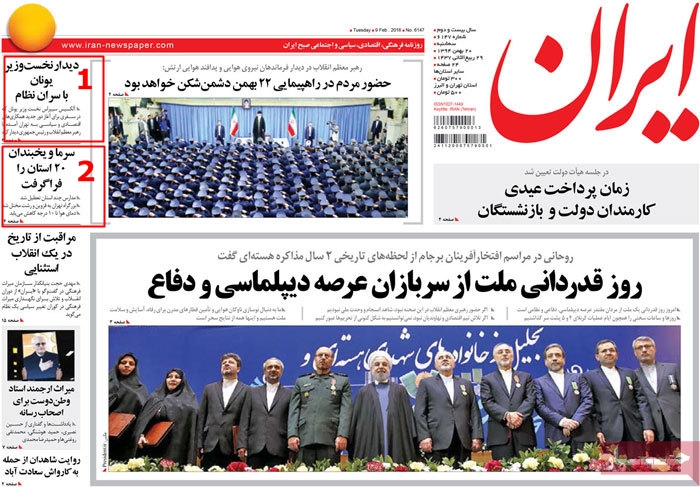 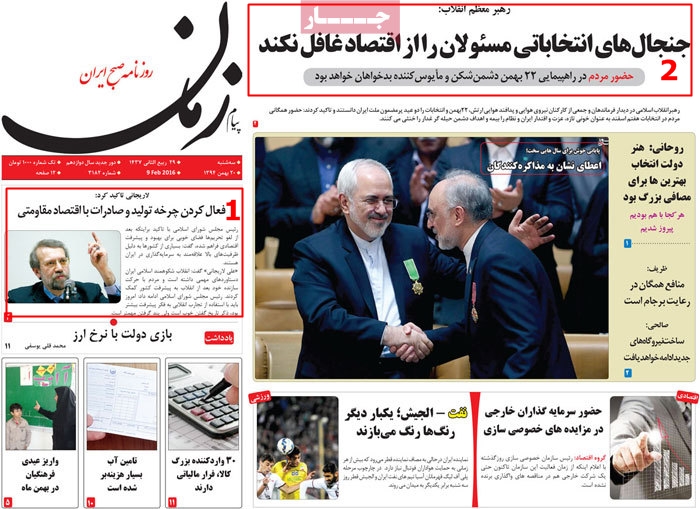 1-No red carpet for Arabian teams in Iran
2-Rouhani: No talks were possible without the endeavours of Iranian commanders in Iraq, Syria
3-Tel Aviv’s strategic fear of Syria developments 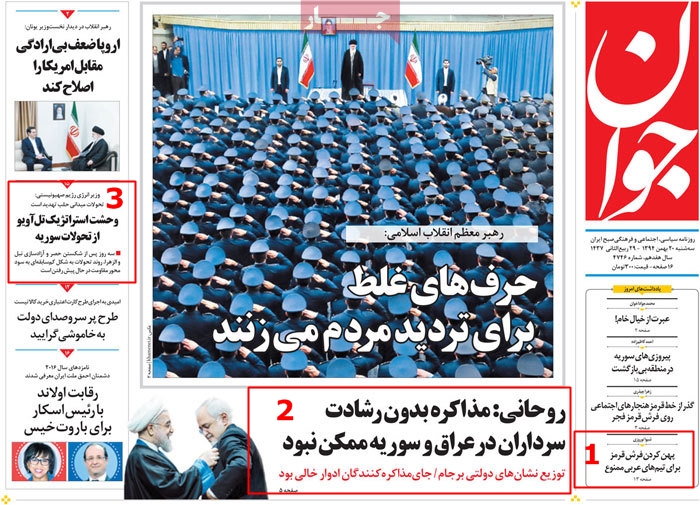 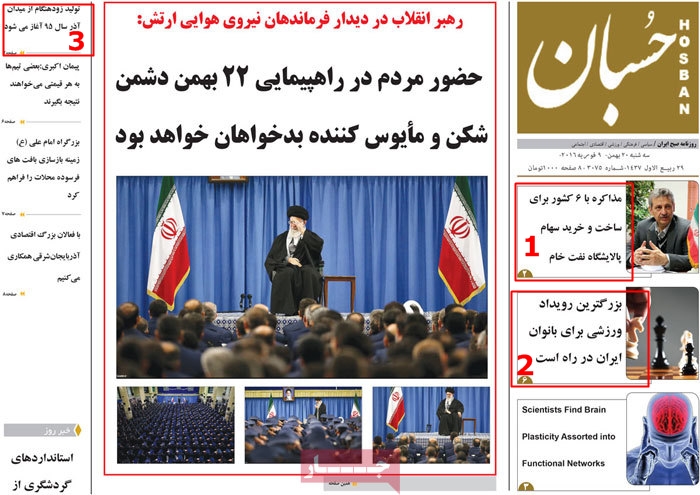 1-Judiciary Chief warns those who think they can derail the revolution by showing enemies the green light
2-Human rights accusations against Iran caused by enmity of the West: Human rights chief
3-Takfiri terrorists nervous about Syrian resistance gains
4-Pyramid schemes re-emerge in Iran 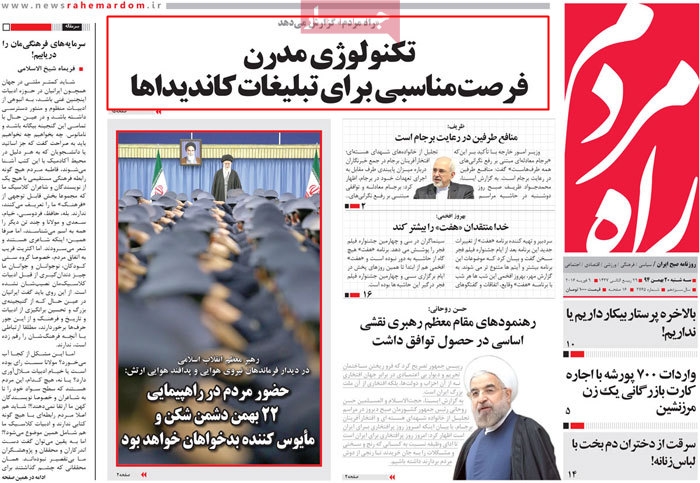 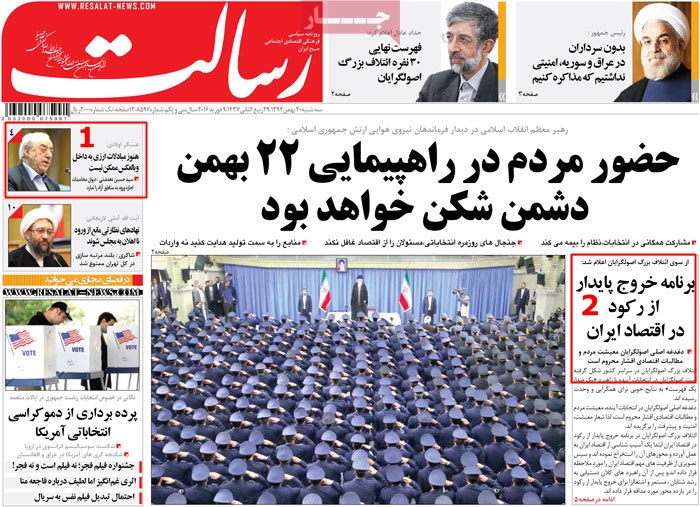 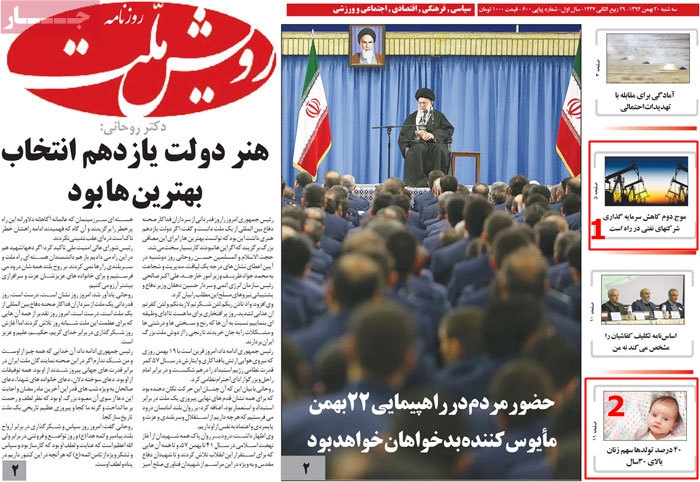 2-Iran plans to deal with oil sludge to preserve environment 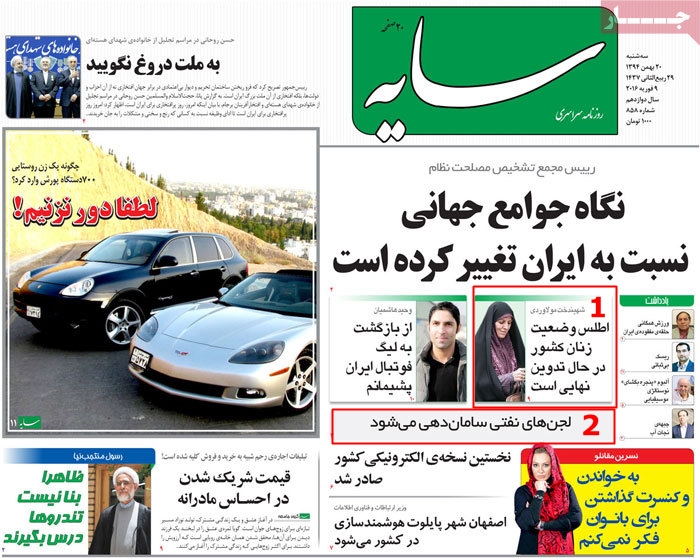 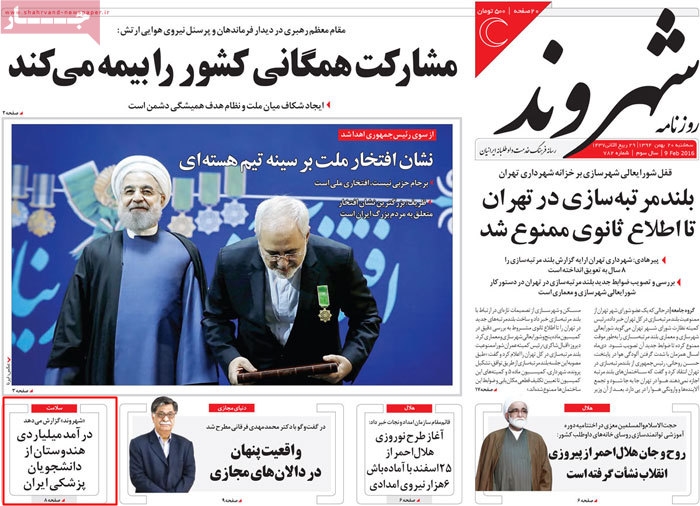 1-No plans to launch Riyadh interests section yet: Iran 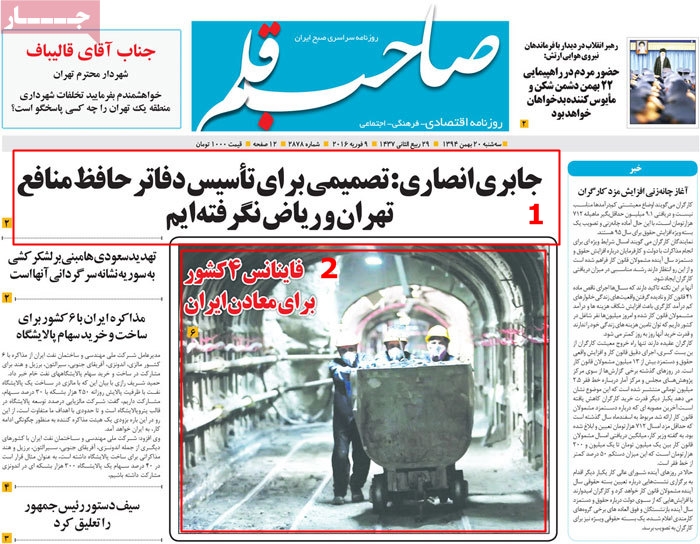 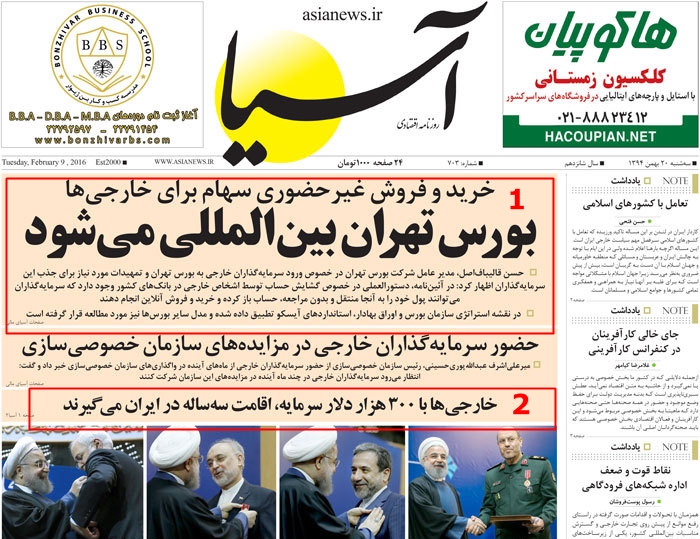 1-Rumors about MasterCard coming to Iran 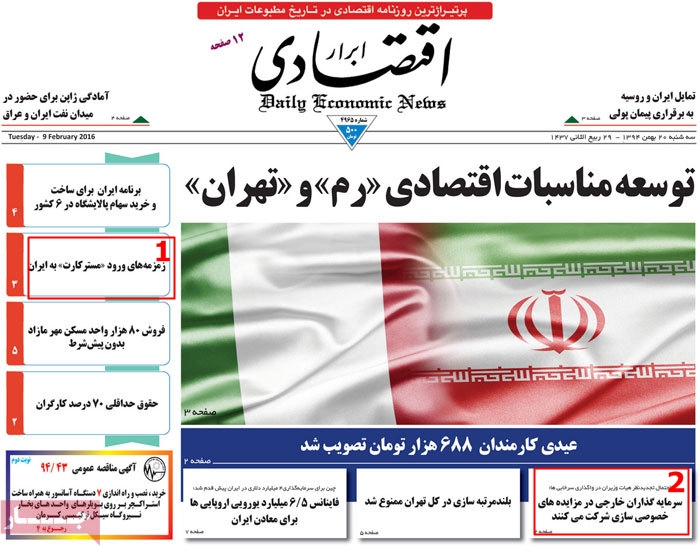