A look at Iranian newspaper front pages on Feb 14

IFP has taken a look at the front pages of Iran newspapers on Sunday and picked headlines from 21 of them. IFP has simply translated the headlines and does not vouch for their accuracy.

Iran has sent 4 million barrels of its oil to Europe. This was the first move by the country to show the world that it is serious about increasing its crude oil exports by at least a million barrels per day within a short period after the removal of sanctions. Aside from that, there is much excitement in political circles about the list of candidates for the Parliamentary and Assembly of Experts elections in late February. Each political faction releases the names of their favoured candidates and tensions are running high between leaders of the parties in trying to convey the merits of their choices to the nation. The Munich accord, bringing rising hope for the restoration of peace in war-torn Syria, was also commented upon by Iranian papers on February 14, 2016.

4- Mogherini to head large delegation to Iran in spring 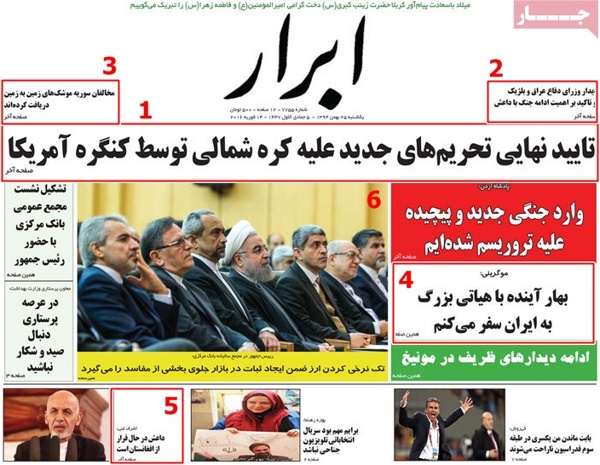 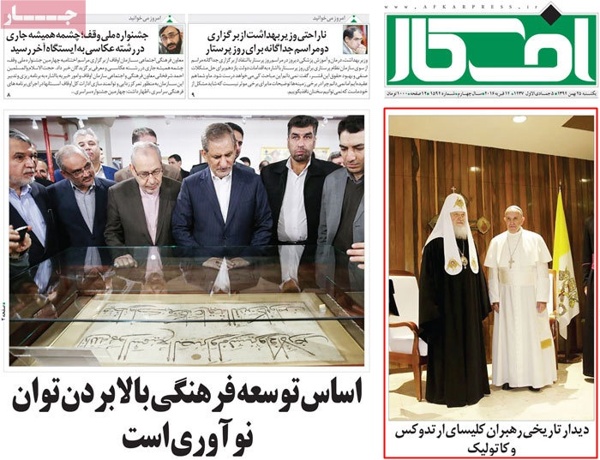 1- Rouhani: No time for complaining now; everyone must vote

2- Gov’t spokesman: Can anyone qualify anymore?

On the coming of Nowrouz [Persian New Year], torrents of provincial beggars have flocked to the Iranian capital, Tehran. 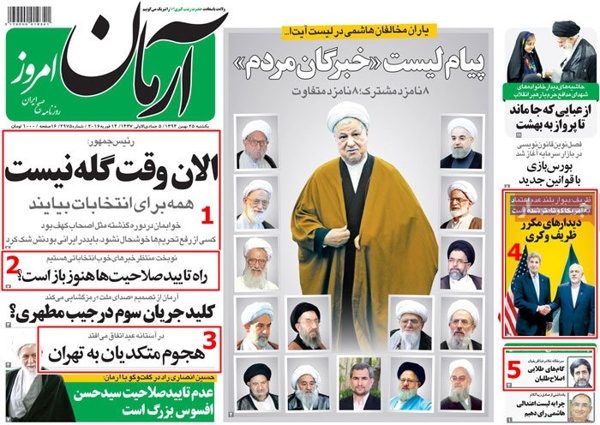 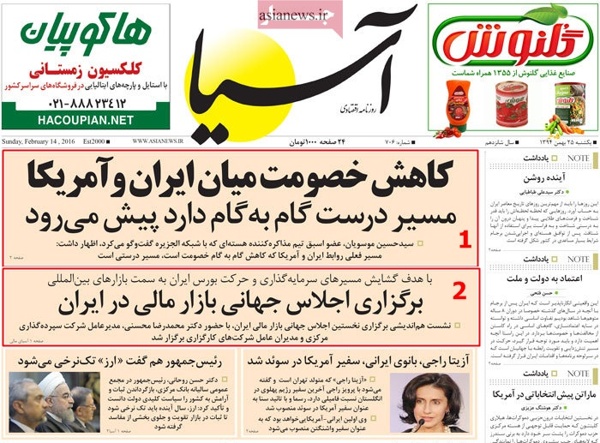 2- Munich Accord Promising for the Interests of Syrian People: Chairman

4- IT Minister: No filters on social networks 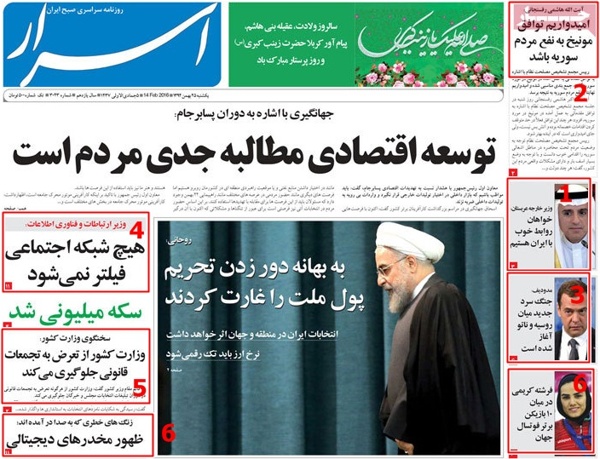 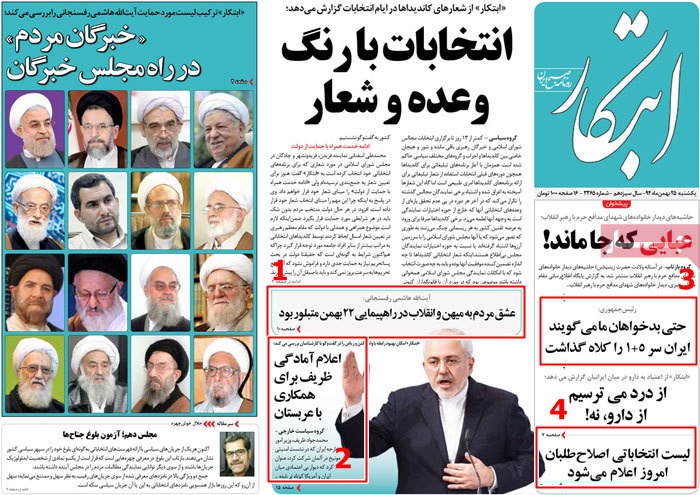 1- Rise of neurological disorders among youth

2- Rural population falls by 7%; 34,000 villages in Iran have been left totally deserted so far. 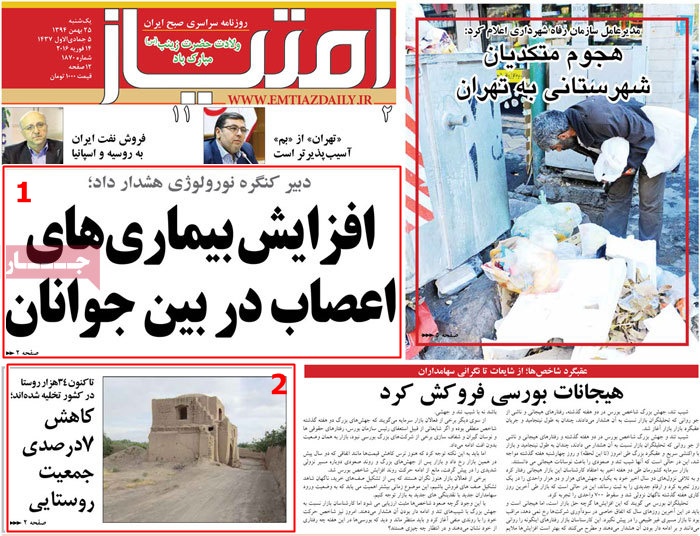 Only 2 weeks before parliamentary elections in Iran, different political factions release lists of their candidates. 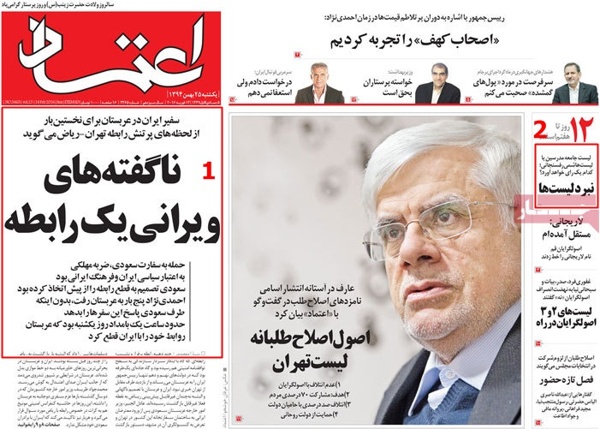 2- President: All country-loving Iranians upbeat about removal of sanctions 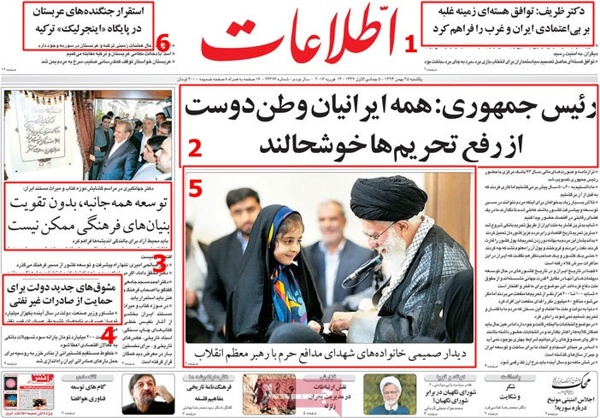 – Two Ayatollahs compete with each other

Ayatollah Rafsanjani and Ayatollah Mesbah Yazdi have issued their candidate lists for the Assembly of Experts elections. 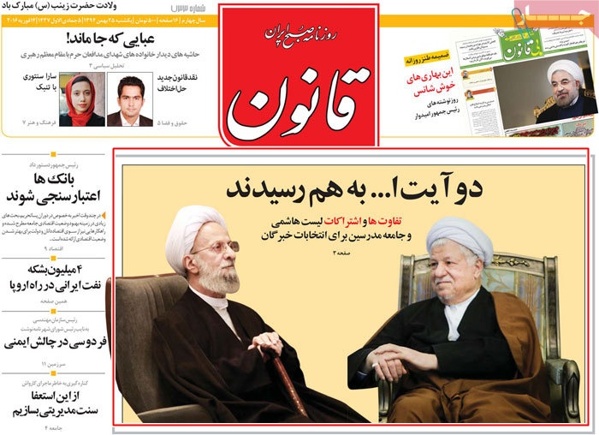 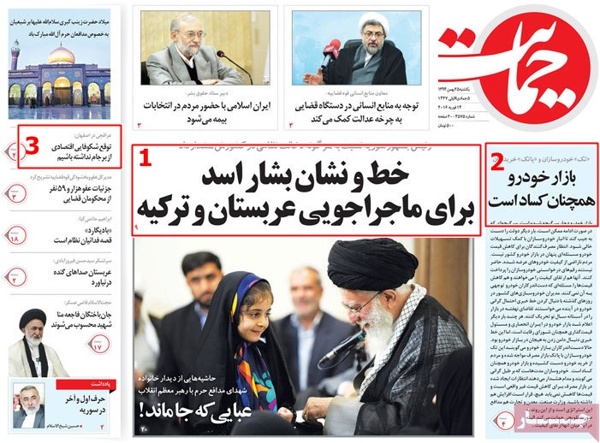 5- Parliament Speaker: There are some who only oppose gov’t decisions 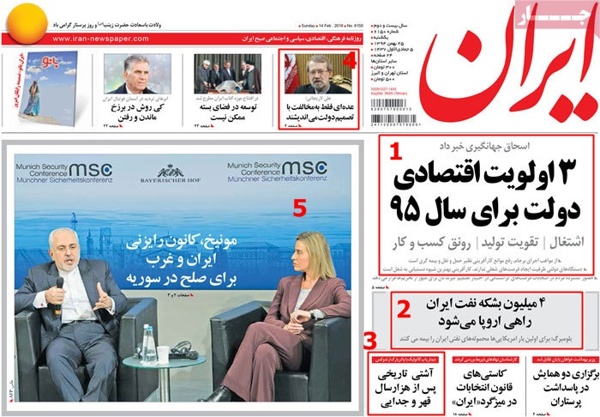 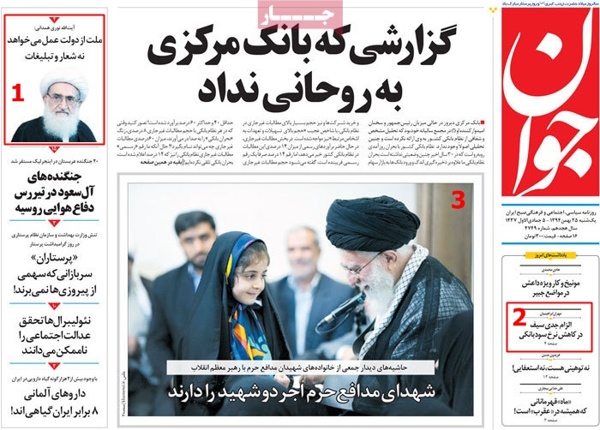 2- Rouhani calls for single forex rate for next Iranian year

3- Zarif: Iran will not become a European consumer market 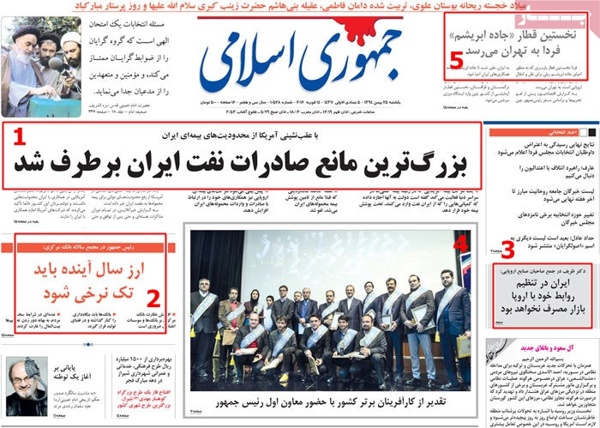 The singer was initially banned from attending the Fajr International Music Festival, after he had given an interview to a foreign channel. The ban was later lifted after efforts by Aqili’s supporters.

3- Medvedev: World in a dramatic state 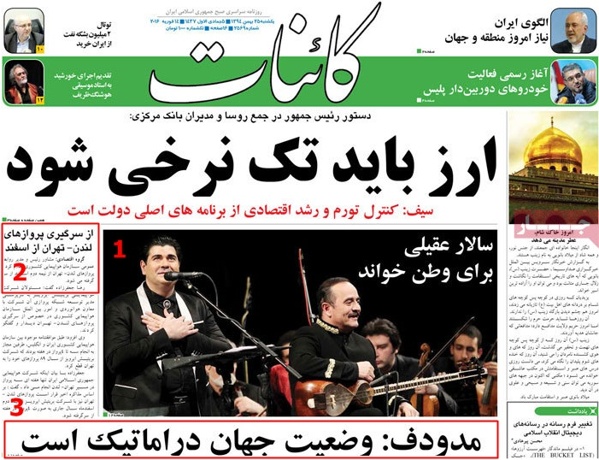 An analysis of the lists of Parliamentary candidates is being released by different political factions. The article says that, in a case where government supporters end up in Parliament, the administration will not be able to fulfil its promises. 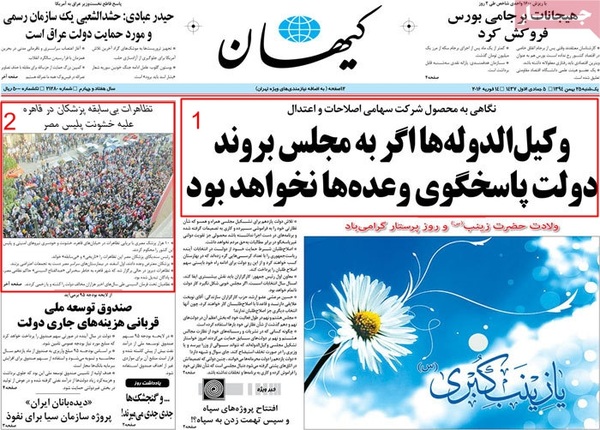 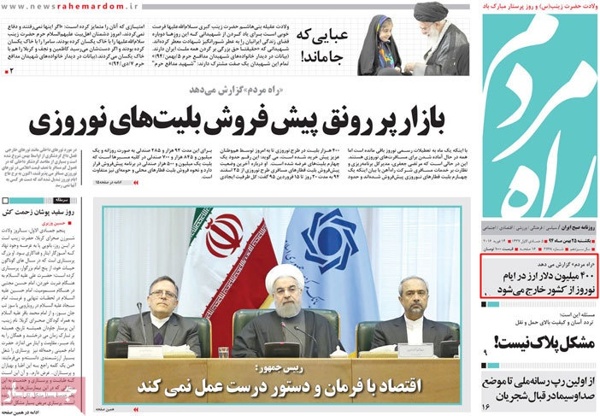 – Real democracy not achievable with US hegemony: Russian theoretician 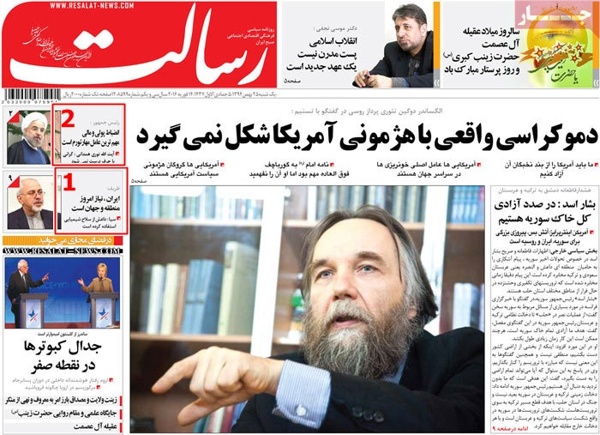 1- Rouhani: Sanctions took us back by decades

4- Iran competing with Russia to supply Tajikistan with oil 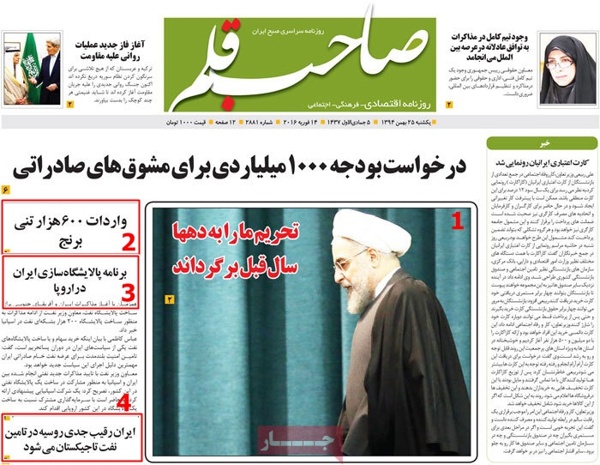 1- President: They looted the nation under the pretext of sanctions

2- Red Crescent Chief: Some parts of Tehran more vulnerable than Bam to earthquakes 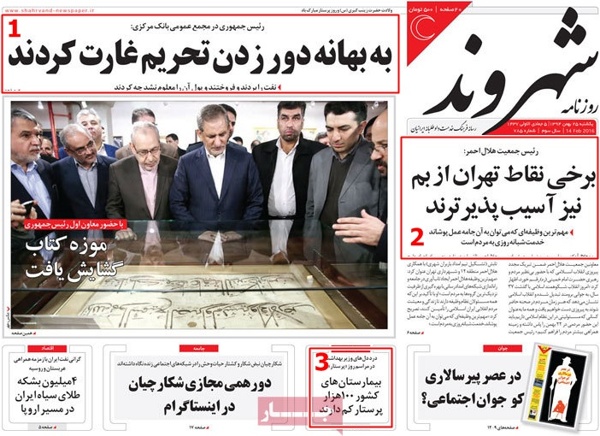 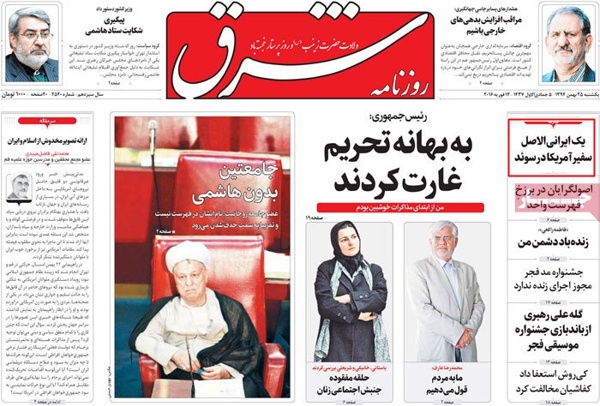