A look at Iranian newspaper front pages on Feb 1

The Supreme leader honoured the IRGC commanders who played a role in the capture of the American trespassers inthe Persian Gulf in January; almost all Iranian dailies covered this story. Alongside this, they marked the beginning of the “10-Day-Dawn”[Fajr] period. The 10-Day-Dawn celebrates the anniversary of the 1979 Islamic Revolution. Here are the highlights on February 1, 2016.

1- I fulfilled the major part of my promises: Iran’s President

3- I am waiting for the US authorities to make up their mind: Deputy FM 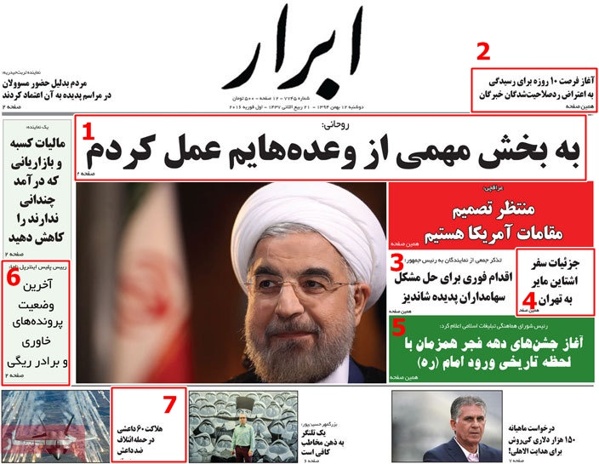 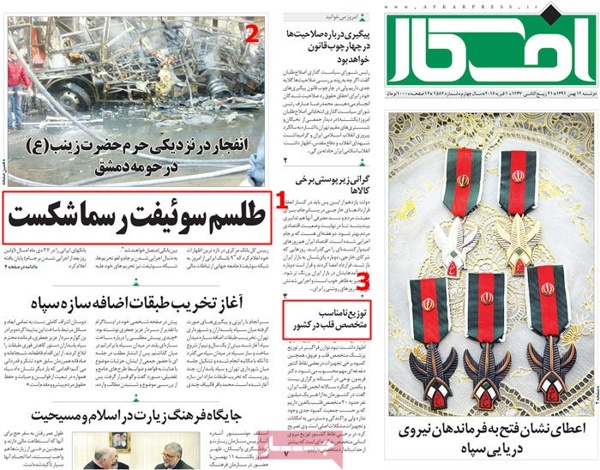 1- No McDonald’s branches in Iran

Iran is seriously pursuing to bring home the number-one culprit of the Big Graft. 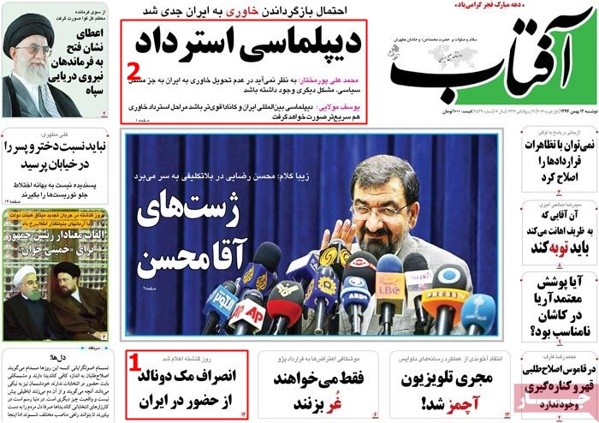 1- Rouhani: People must not turn their back on the polls

2- Respect for imam is respect for his court: Rouhani

The speaker of the Iranian Parliament, Ali Larijani, says street protests are not the way to reform the new contract model for future Iranian oil deals.

An interview with Bahman Arman about the terms of the new oil contract model, dubbed “Iran Petroleum Contract”, or IPC. 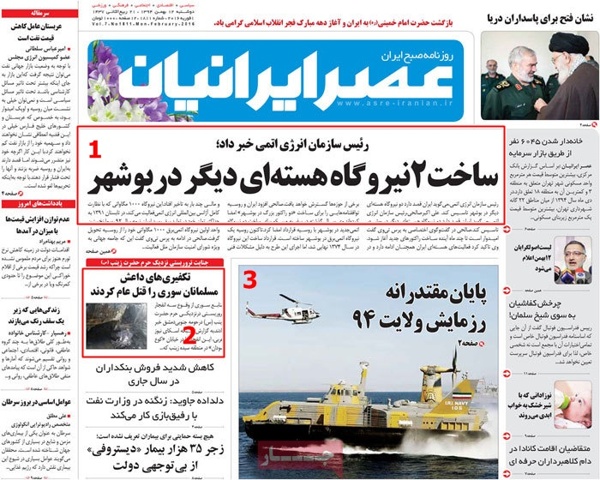 1- Iran in talks with China, EU to renovate railway system 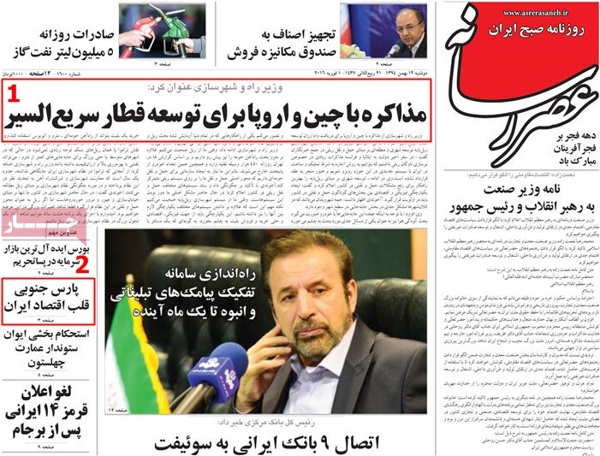 3- Reformist figure: What matters most is maximum turnout in the polls 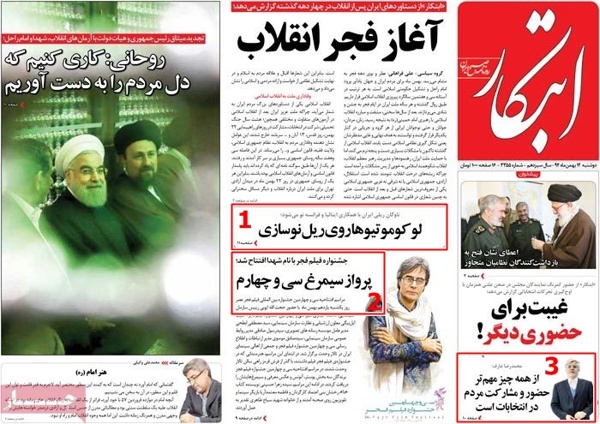 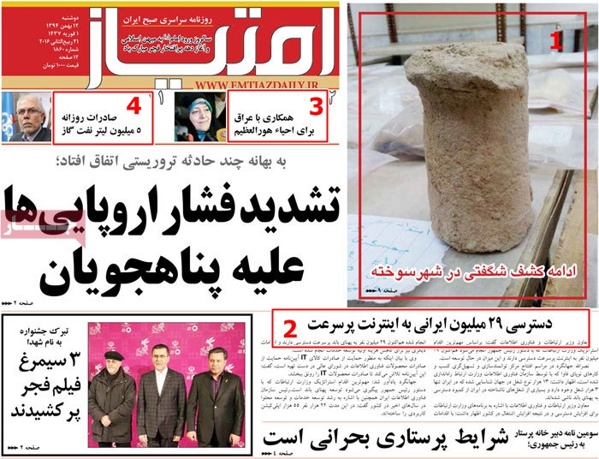 The daily republished a photo of Imam Khomeini re-entering the country. This headline and picture was widely displayed in all the country’s headlines on Thursday, February 1, 1979.

2. The worriers of Airbus

With Iran’s business delegation, headed by Iranian President Hassan Rouhani, returning to the country, a fresh wave of principal concerns has arisen against the terms of the new deals Iran signed with European companies. This includes the purchase of new aircraft from French company Airbus. 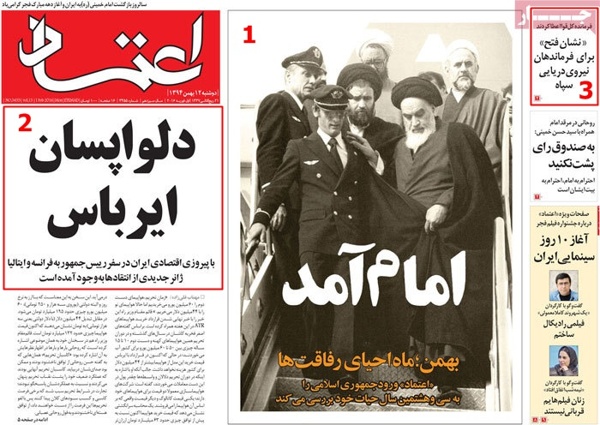 1- Rouhani: Iran neither a lover of foreigners nor a seeker of isolation

President Rouhani paid homage to Imam Khomeini and the martyrs of the Islamic Revolution. 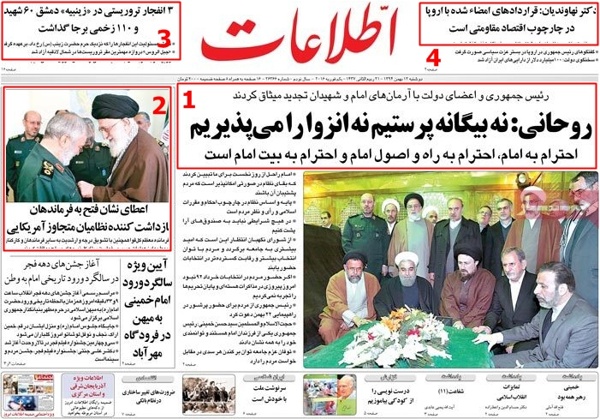 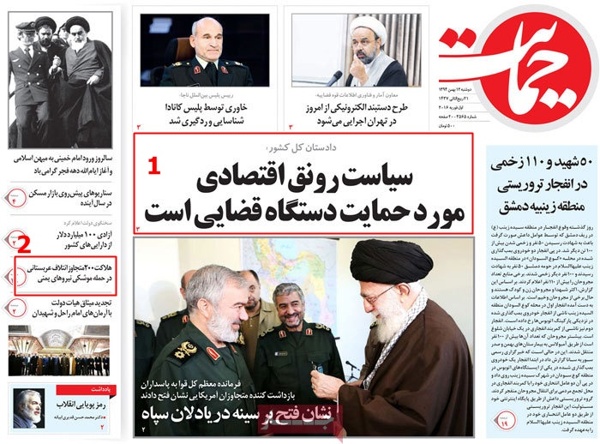 1- $100b of Iranian cash unfrozen: Spokesman 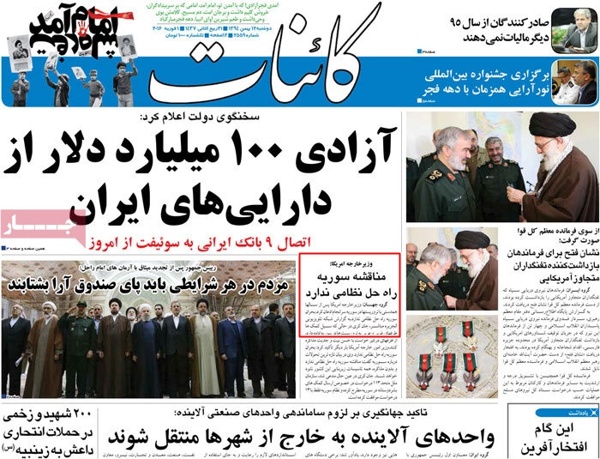 1. Imam Khomeini: I have come to sever the hands of foreigners from the homeland

Marking the anniversary of the 1979 Islamic Revolution, Kayhan published a picture of Imam Khomeini returning to Iran after years of exile.

2. The man who startled the East and shook the West 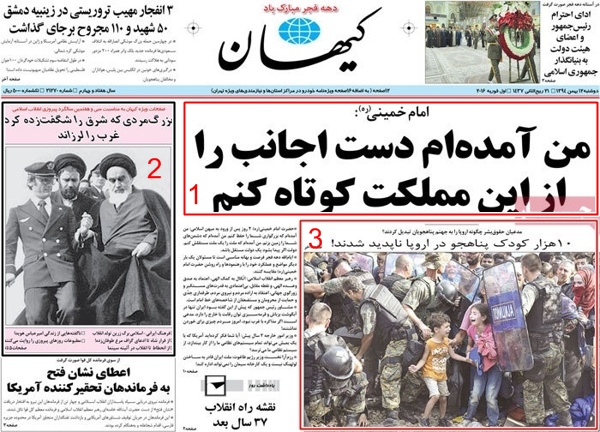 1.  Elections in Iran, nightmares in the West: Mohammad Javad Larijani 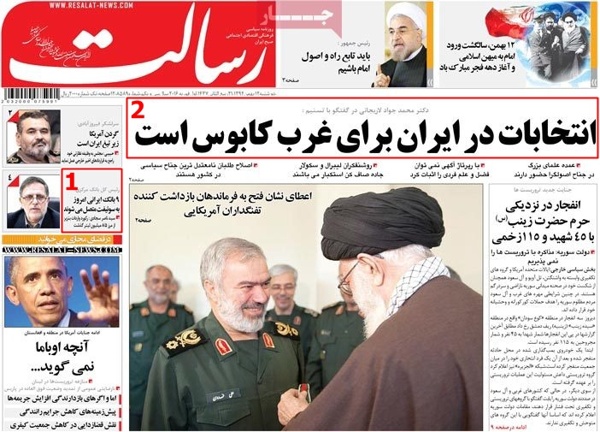 The Islamic Republic of Iran Broadcasting (IRIB) has procured several TV shows to mark the anniversary of the victory of the 1979 Islamic Revolution.

2.  Talk in Geneva, Murders in Damascus

Terrorist attacks by ISIS in Damascus have killed dozens and wounded hundreds. 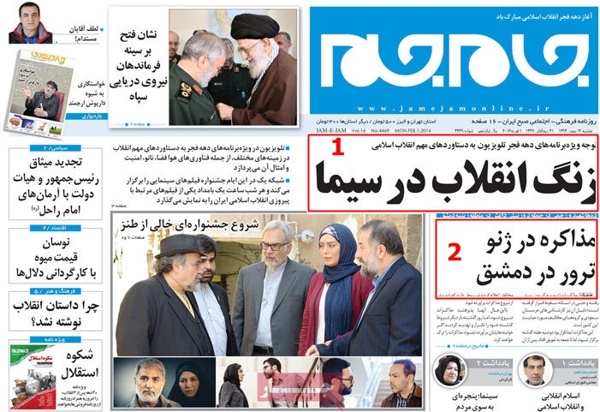 –  The 4th generation after the Revolution celebrate its anniversary

Students decorate their schools to mark the 37th anniversary of the victory of the Islamic Revolution. 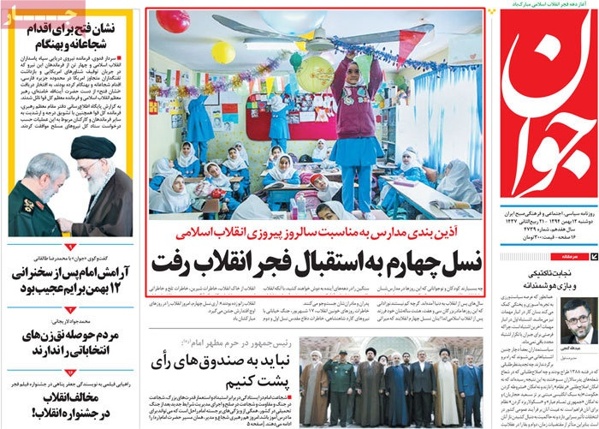 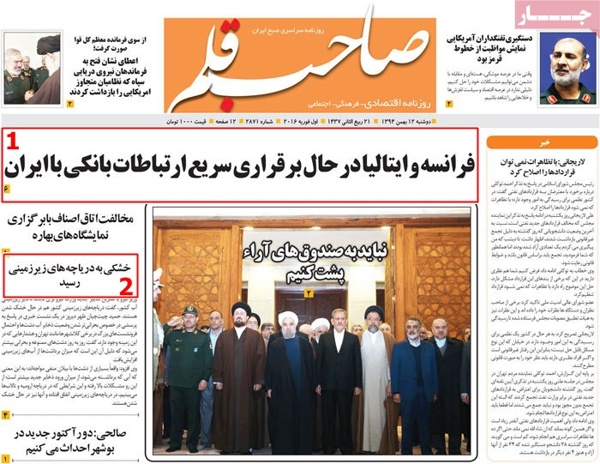 The head of Islamic Azad University urged the UNESCO national committee in Iran to register the university as a successful model of investment. 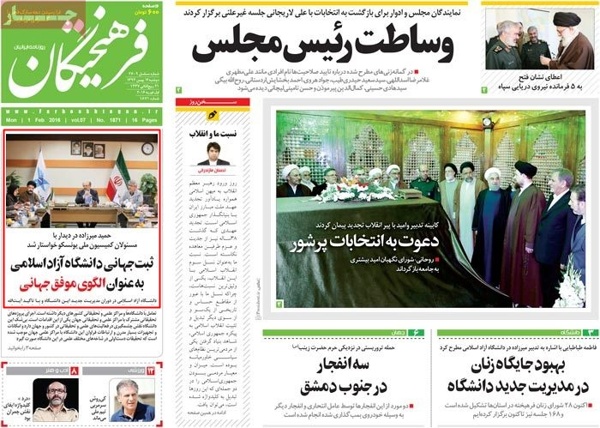 2.  The night of soothing Iran could easily make use of its unfrozen assets

2.  Air pollution; authorities waiting to do something! 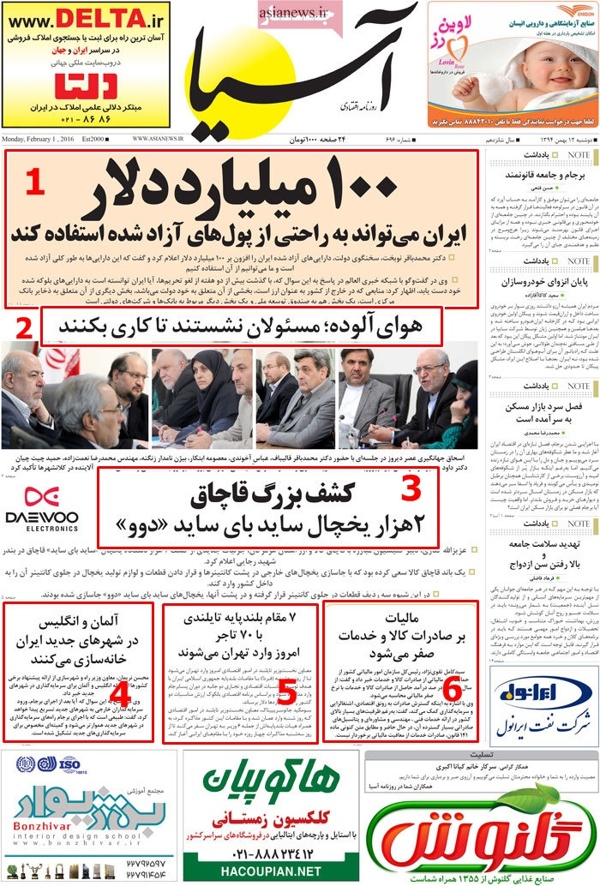 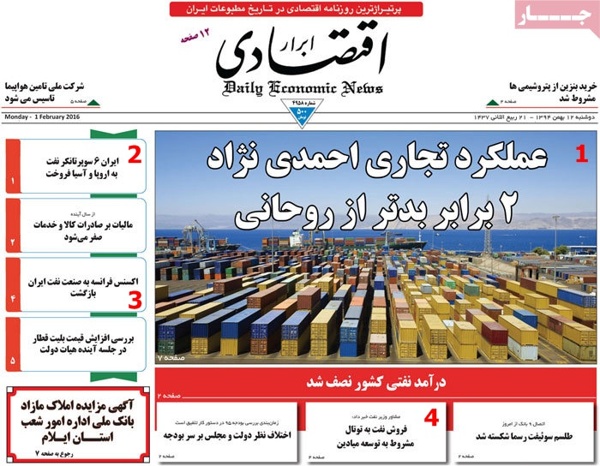