A look at Iranian newspaper front pages on Dec. 17

The comments of President Rouhani that his administration has honored the promise it made to the nation dominated the front pages of Iranian newspapers on Thursday.

Ettela’at: The victory of the Iranian nation at the [IAEA] Board of Governors was a moral, political and technical triumph, said President Rouhani in a televised speech.

After almost 12 years it became clear that the establishment is honest with its people and with world nations; did and does not lie; and honors its commitments.

Ettela’at: Some 43 percent of the economy is tax exempt.

The minister of economy has said that tax has yet to find its place as a financing tool for the government.

Ettela’at: A new wave of crackdown in Nigeria has left four Shiites martyred and 500 others arrested.

Grand Ayatollahs Javadi Amoli, Makarem Shirazi and Sobhani have condemned the Nigerian army attack on the Shiites and appealed for the release of Sheikh Zakzaky.

Ettela’at: Parliament Speaker Ali Larijani has said that efforts to protect the environment are now a global imperative.

He further said that the country’s costly overreliance on oil does not sound rational.

Ettela’at: Individuals seeking to run for the Assembly of Experts have started fielding their candidacy.

Enrollment of those who want to run for parliament gets underway on Saturday.

Ettela’at: A plan to introduce a single currency rate is being drawn up.

A lieutenant governor of the Central Bank has said that the monetary pact Iran and Russia have signed will soon take effect.

Ettela’at: Top researchers and technology experts of the country have been named. Aftab-e Yazd: The Saudi foreign minister has said that Riyadh is mulling the deployment of ground forces to Syria. Arman-e Emrooz: Chairman of the Expediency Council Ayatollah Akbar Hashemi Rafsanjani has congratulated President Rouhani on the closure of the PMD case.

In a message, the top councilor likened the “sweet nuclear victory” to Resolution 598 [which brought the Iran-Iraq war to an end in the late 1980s]. Asrar: Tourism growth in Iran is three times the global average, said the director of the Cultural Heritage, Tourism and Handicrafts Organization.

Asrar: Parliament Speaker Ali Larijani has said that with the ruling of the IAEA Board of Governors [to declare the PMD case closed] Iran negotiated a major bend. Ebtekar: President Rouhani has promised that sanctions will be lifted in January.

In a televised speech, he further said that leveling criticism at the Joint Comprehensive Plan of Action is no longer in order. Emtiaz: The remains of a giant ancient creature have been unearthed in Ardebil [in northwestern Iran.]

Emtiaz: The industry minister has said that the Iranian private sector stands ready to boost its cooperation with Oman. Etemad: Iranians will stage demonstrations after Friday prayers to protest the killing of Nigerian Shiites. Ghanoon: The closing of the PMD case amounts to a victory for diplomacy, said the parliament speaker.

Ghanoon: I did keep the promise I made, said President Rouhani. “Sanctions will be lifted next month.” Hemayat: The presuppositions of Western human rights are not acceptable to us, said the Judiciary chief.

Hemayat: The law which turns up the heat on drug trafficking remains in effect, said the attorney general. Javan: John Kerry has said that the US does not seek a regime change in Syria. Jomhouri Islami: President Rouhani has said the country needs to get ready for an economic leap; sanctions will be removed next month.

Jomhouri Islami: Iran is ready for the worst-case scenario as far as the plunge in oil prices is concerned. Kaenat: The defense minister has said that militarily advanced countries have proposed to cooperate with Iran. Kayhan: The commander of the Islamic Revolution Guard Corps has said that as long as Iran’s revolution remains on its original path, US enmity toward Iran won’t ease. Mardomsalari: People in Mashhad have staged a rally outside UN offices to protest the silence of the international community over the killings of Nigerian Shiites.

Mardomsalari: The Iranian nuclear chief has said that a neighboring country has asked Iran to build a nuclear research plant for it. Finding a solution to the Syrian crisis is on the agenda. Resalat: The world has accepted to live with an Iran in possession of nuclear technology, said the defense minister.

Resalat: Haddad Adel [a former parliament speaker] has become the spokesman of a principlist coalition. Shahrvand: Government kept the promise it made to the nation, President Rouhani said as he urged the Iranian people to prepare for an economic leap in the post-sanctions era. Sharq: Yasser Hashemi has said that his father [Ayatollah Hashemi Rafsanjani] has yet to visit Mehdi in prison. [Mehdi Hashemi is in jail after he was found guilty in a corruption case]. Sobh-e Eghtesad: The director of the Atomic Energy Organization has said that a report on Iran’s long-term nuclear activities will soon be sent to the IAEA. 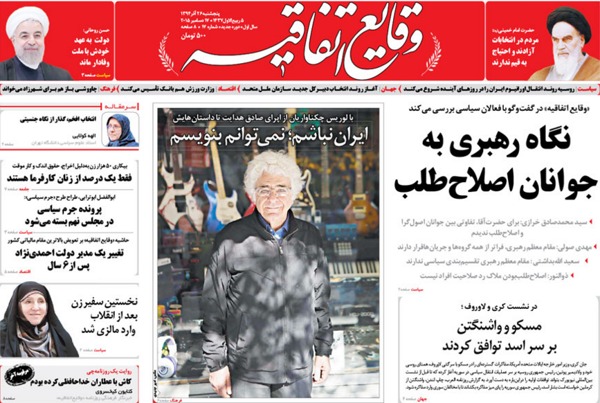