A look at Iranian newspaper front pages on Dec. 14

IFP has taken a look at the front pages of newspapers on Monday and picked headlines from 26 of them. IFP has simply translated the headlines and does not vouch for their accuracy.

Tehran playing host to a 12th edition of Iran Petrochemical Forum and the wide-ranging comments of the Judiciary spokesman dominated the front pages of Iranian newspapers on Monday. Also on the cover of reformist-leaning dailies were the all-important remarks of the chairman of the Expediency Council about upcoming elections and the Assembly of Experts.   Ettela’at: Employment and welfare will be [the country’s] top priorities in the post-sanctions era, First Vice-President Eshagh Jahangiri told an international petrochemical forum. He further said that the resistance-based economy will be the flagship policy of the post-sanctions era. Ettela’at: As of December 22, home loans totaling around $23,000 will be on offer. Ettela’at: Thirty-five were killed when the Nigerian army staged an attack on a Shiite funeral service in Zaria. Ettela’at: The world agreed to save Planet Earth. The representatives of 195 countries have given a nod to a global march toward renewable energies. Ettela’at: Ayatollah Hashemi Rafsanjani has said that going to extremes won’t serve the interests of the Revolution and Islam. The chairman of the Expediency Council further said that some groups always take political advantages of the warnings of the Supreme Leader whose real and legal reputation should not be used in political gamesmanship. Ettela’at: Foreign Minister Mohammad Javad Zarif said that failure to take note of the achievements of the Joint Comprehensive Plan of Action will harm the country’s interests. He further said that implementation of the Iran-IAEA roadmap has spelled an end to divisions over the removal of sanctions. Afkar: The solution to the Syrian crisis lies in a political approach, said an Iranian deputy foreign minister. Aftab-e Yazd: Chairman of the Expediency Council Ayatollah Akbar Hashemi Rafsanjani has said that hardliner pressure won’t have an impact on him. Arman-e Emrooz: The managing editor of Ettela’at daily is out on bail. Seyyed Mahmoud Doaei was summoned to court for a second time and arraigned. [It came after his daily republished an interview former President Mohammad Khatami gave to a Lebanese newspaper. According to the Judiciary, there is a ban on publication of news stories and images of the former reformist president in place in Iran.] Asrar: The first vice president has said that Iran is facing a plot to keep oil prices low. Asrar: The director of the Environment Protection Organization has hailed the Paris summit on climate change as a “milestone for humanity”. Asrar: Two Iranian wrestlers have been banned from the sport for using performance enhancing drugs. Bahar: The Judiciary spokesman has said that the ban [on publication of news about and images of former President Mohammad Khatami] is still in effect. Ebtekar: The deputy foreign minister has reported the start of bilateral talks between Iran and Saudi Arabia. Ebtekar: Abbas Araghchi, a deputy foreign minister, has said that if the recent decision of the US House of Representatives turns out to contradict the provisions of the Joint Comprehensive Plan of Action, Iran will take action. Ebtekar: Ayatollah Rafsanjani has said that a leadership election council has been formed at the Assembly of Experts. Emtiaz: Police on skis have been deployed to ski slopes of the capital. Etemad: Tochal Cable Car [in the mountains to the north of the capital] is in dangerous conditions. Ghanoon: A broad-based Assembly of Experts will promote the cachet of the leader, said Ayatollah Hashemi Rafsanjani. Hadaf va Eghtesad: The Judiciary spokesman has said that four people have been arrested for forging the signature of senior officials. Hambastegi: The number of defendants in the Babak Zanjani corruption trial is more than three, said the Judiciary spokesman. Hemayat: The Judiciary spokesman has said that if he were a prosecutor, he would have brought charges against the individual who recently insulted the Guardian Council. Hemayat: The justice minister has said that unauthorized financial and monetary institutes should be seriously dealt with. Iran: There are individuals who do not want the nuclear deal to be implemented before elections are held in late February, said the chairman of the Expediency Council. Javan: The Judiciary spokesman has said that those who commit electoral offenses will be seriously dealt with. Jomhouri Islami: Foreign Minister Zarif has said that Iran is on the cusp of the post-sanctions era. His deputy meanwhile said that the so-called PMD (possible military dimension) file will soon be history. And a number of MPs have said that the draft resolution of the IAEA Board of Governors shows that Iran’s PMD case will be declared closed. Kayhan: The American dream of an Iraqi breakup is on the agenda of Erdogan. Mardomsalari: Influenza is inching in on the capital. Forty-six people have died of the flu across the country so far this year. Nasl-e Farda: With salary talks around the corner, laborers have sent a letter to the president. Saheb Ghalam: As many as 250,000 engineers graduate from Iranian universities each year. Sayeh: The Joint Comprehensive Plan of Action was the result of efforts to ward off war, said Secretary of the Expediency Council Mohsen Rezaei. Sharq: The intelligence minister has said that efforts are being made to ensure job security for those involved in media. Vaghaye-e Etefaghiyeh: The deputy minister of industries, mines and trade has said that American automakers can invest in Iran. 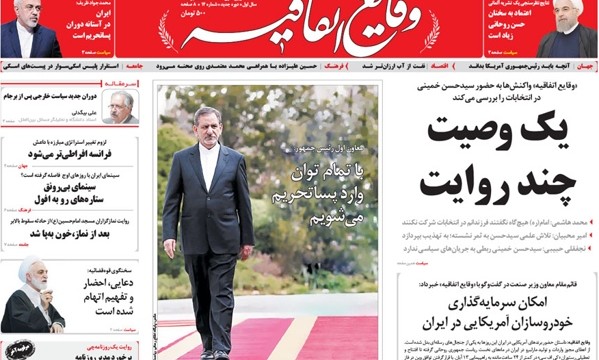