A look at Iranian newspaper front pages on Jan 27

IFP has taken a look at the front pages of Iran newspapers on Wednesday and picked headlines from 28 of them. IFP has simply translated the headlines and does not vouch for their accuracy.

Iran is positioning itself as a regional peacemaker and a global trade partner for international companies and world countries now that the US-engineered sanctions on Tehran’s nuclear agenda are being removed thanks to the historic nuclear deal Iran, the third largest OPEC crude oil exporter, struck with the P5+1 group of countries back in July. As a first move since last week that the sanctions’ removal began, Iranian President Hassan Rouhani has started a whistle-blow tour to Europe to seek economic opportunities with the green continent. This grabbed a lot of headlines on Wednesday, January 27, 2016. Moreover, Rouhani’s meeting with Pope Francis in Vatican and the Iranian business delegation accompanying Rouhani also won some headlines as well.

Regarding domestic developments, the Guardian Council, the body responsible for vetting the Islamic credentials of parliamentary and Assembly of Experts hopefuls in the late February elections, announced its final decision regarding the list of qualified nominees that can start their election campaigns across the country. Among the most outstanding hopefuls that took many headlines were Hashemi Rafsanjani who was qualified and Hassan Khomeini, grandson of the founder of the Islamic Revolution, Imam Khomeini, was announced disqualified.

Here are the main titles: 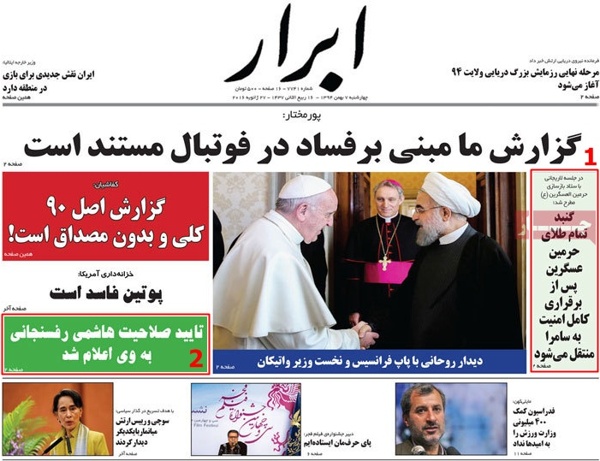 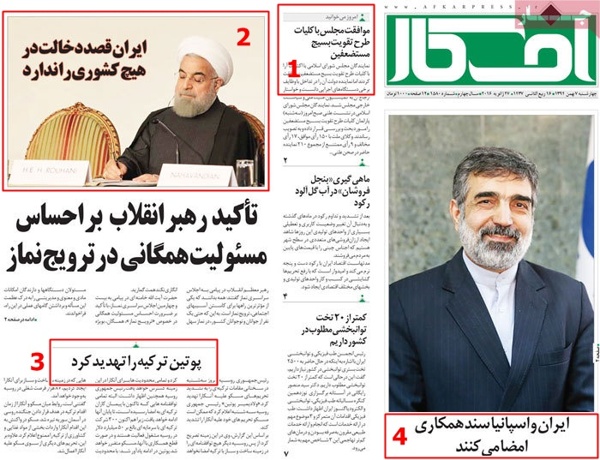 “I will talk in a day or two,” said Mr. Khomeini. “Whatever comes to us is what he [the almighty God] wants.”

Seyyed Hassan Khomeini, who was disqualified for competing in election of the Assembly of Experts, said referring to the decision taken by the Guardian Council. 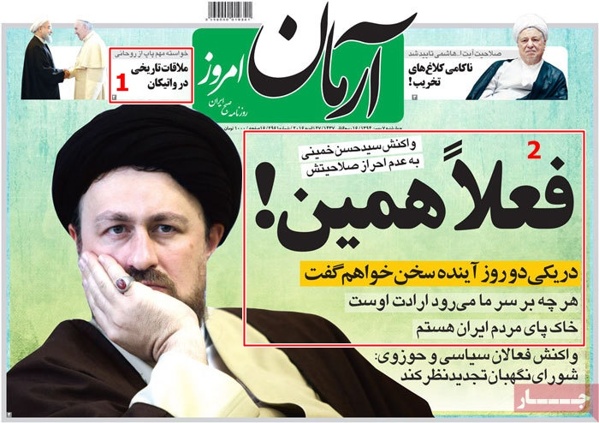 Iran and Spain are expected to sign a memorandum of understanding (MoU) on nuclear cooperation within the coming months, Behrouz Kamalvandi, spokesperson of the Atomic Energy Organization of Iran (AEOI) said. 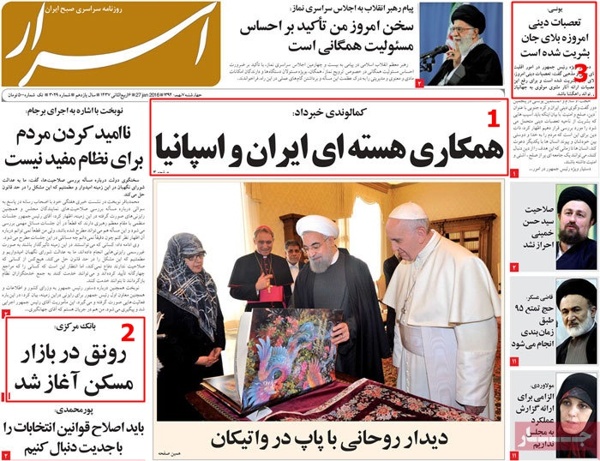 A report about the Rouhani administration’s diplomatic endeavors that are aimed at promoting the country’s economy. Iranian President Hassan Rouhani is in a European tour and has paid a visit to Italy and Vatican. 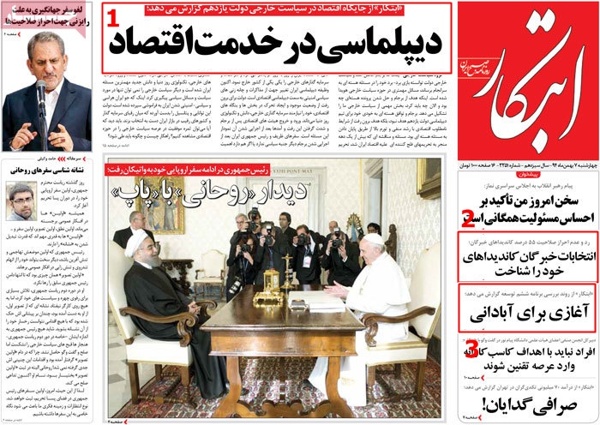 1- Culture Minister: No support for artists who interview satellite channels

2- Risk of medicine shortage in hospitals 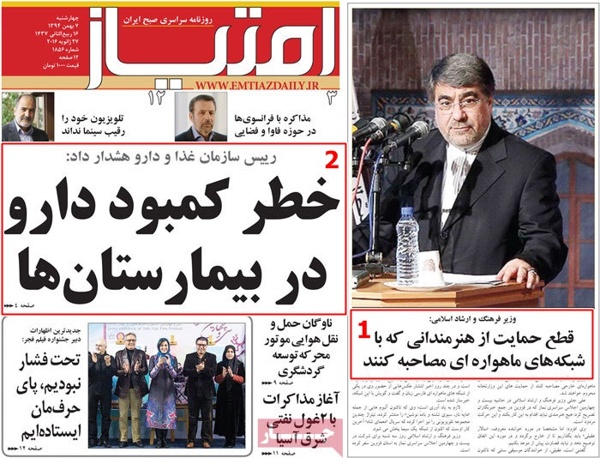 1- Memory of Italy everlasting for Rouhani

2- Leader urges officials to make everyone say their prayers 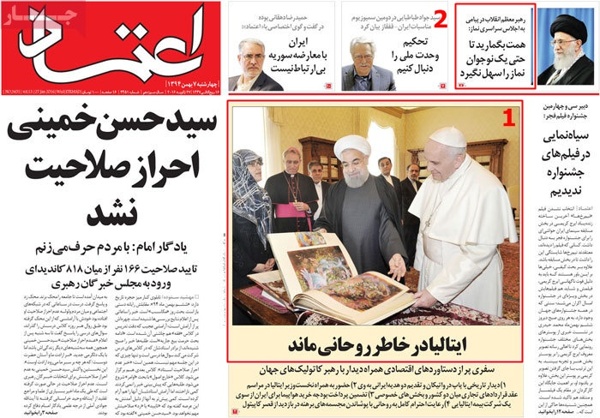 Tehran and Rome have signed 14 documents in the areas of transportation, education, trade, agriculture and medicine. 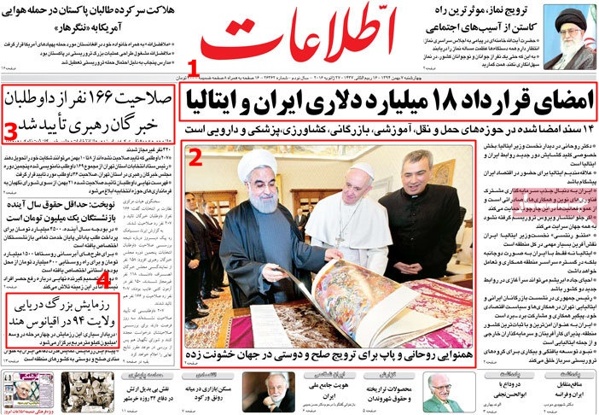 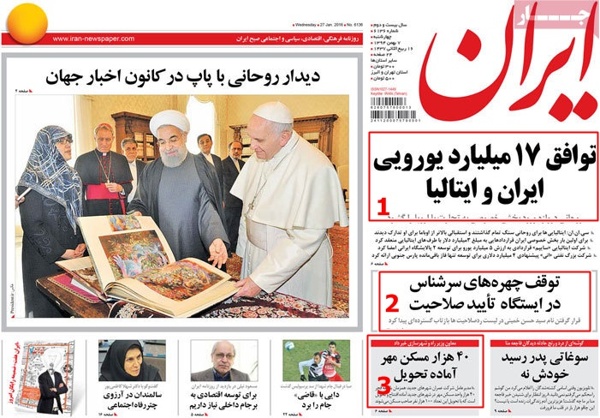 – A quarter of agricultural products wasted 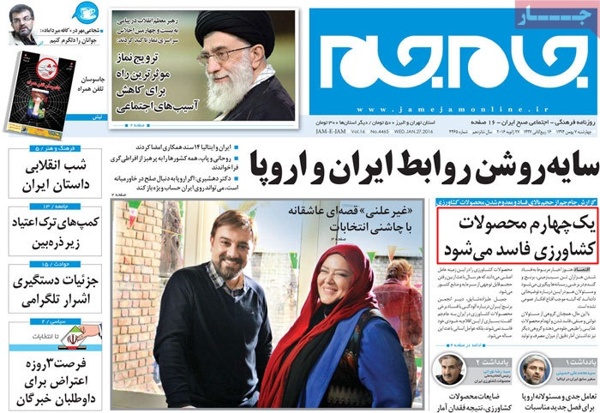 2. Erdogan panicked by possibility of formation of “parallel government structure” in Turkey 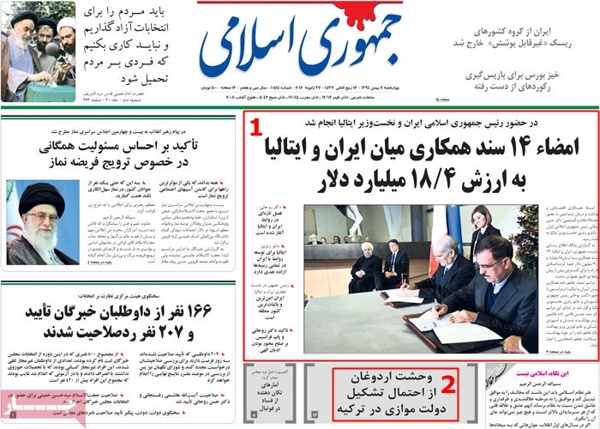 1. 13% rise in number of qualified candidates for Assembly of Experts

2. Rouhani to Pope: Pray for me

3. Leader to nationwide Prayer Conference: I expect all organs to realize the greatness of prayer 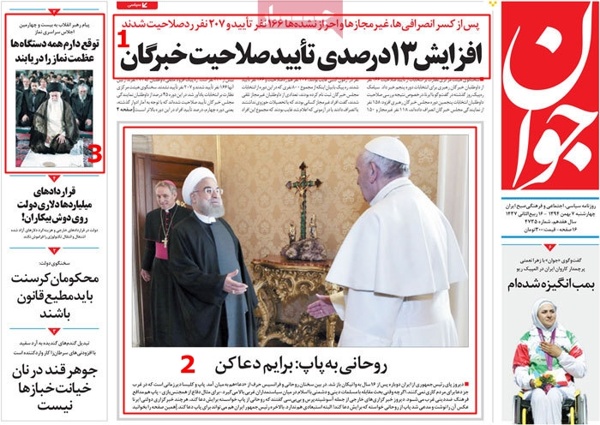 2. Attracting $70b of investments in Petchem sector possible 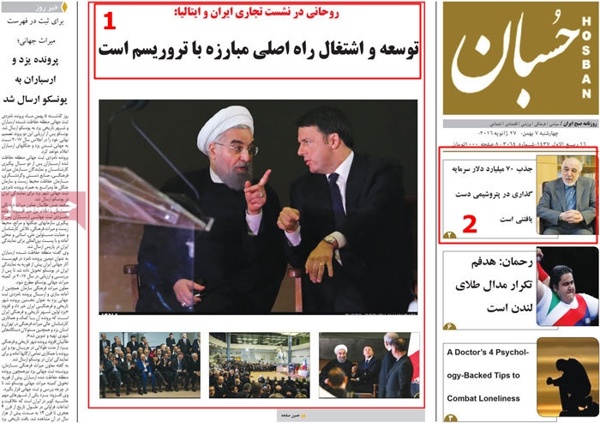 – Judiciary Chief: Westerners’ fear for religious democracy greater than that for our missiles 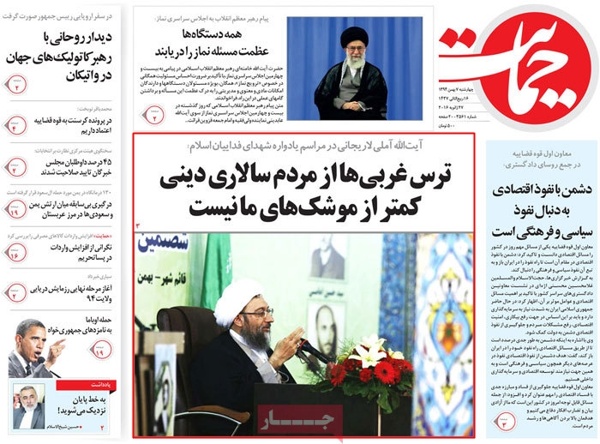 A 19% growth has been registered in the number of traded housed in Tehran. 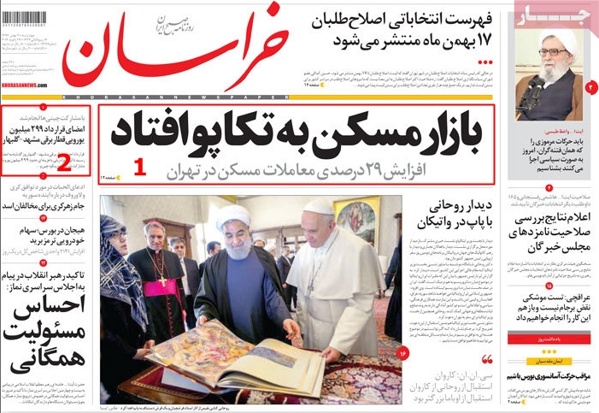 3. US, Saudi division of support for Takfiris

The daily has quoted al Akhbar, saying that Saudi Arabia procures finances and the US executes regional wars. 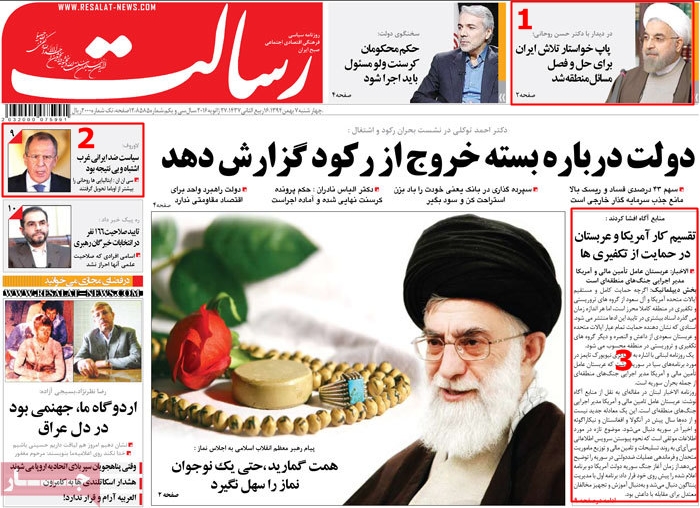 A former nomad teacher, Dr. Ali Malek Hosseini has been revered for conducting the first live liver transplant in Iran. 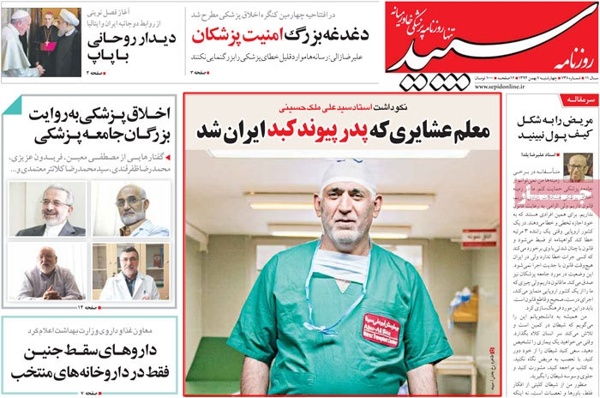 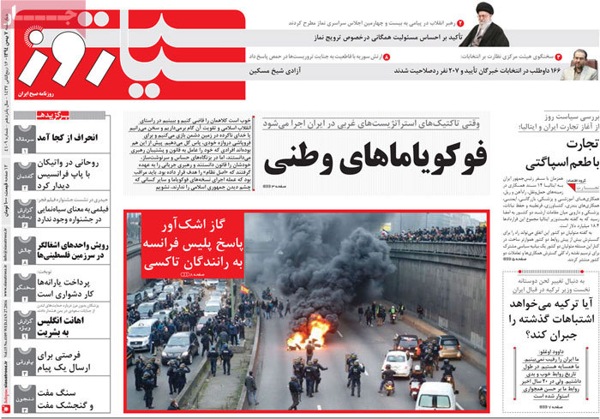 1. Historic meeting in capital of Christianity

1. Head of Article 90 Committee: Release of fresh details about corruption in football under way

2. Cold water pours on US hands

Lavrov: Assad not to leave nor to flee 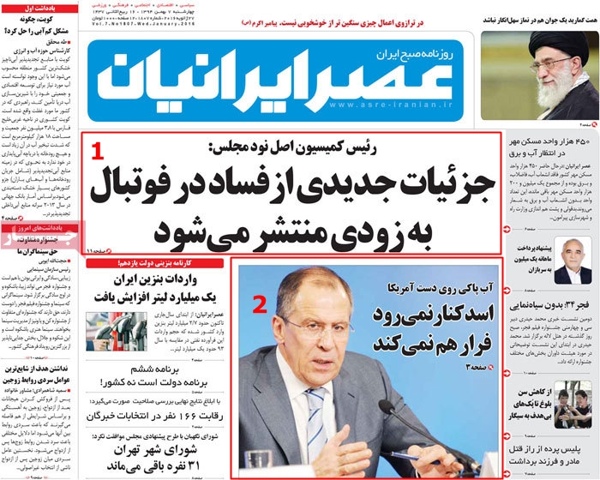 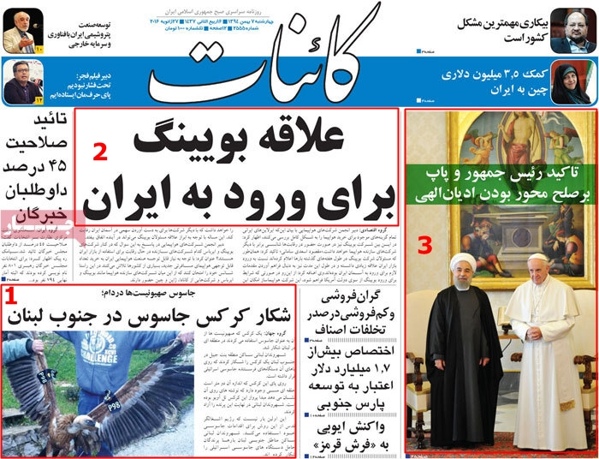 The council has released the final results of vetting the credentials of parliamentary and Assembly of Experts hopefuls. 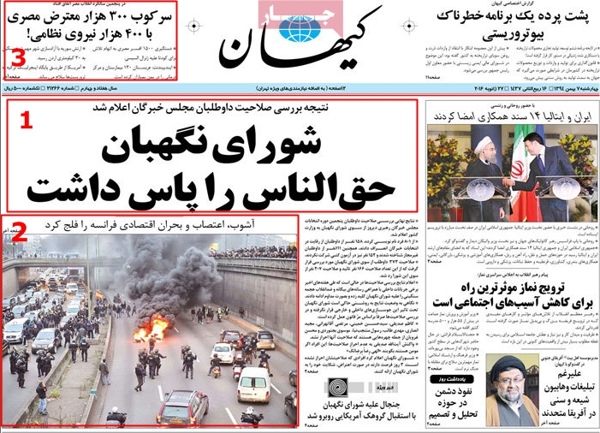 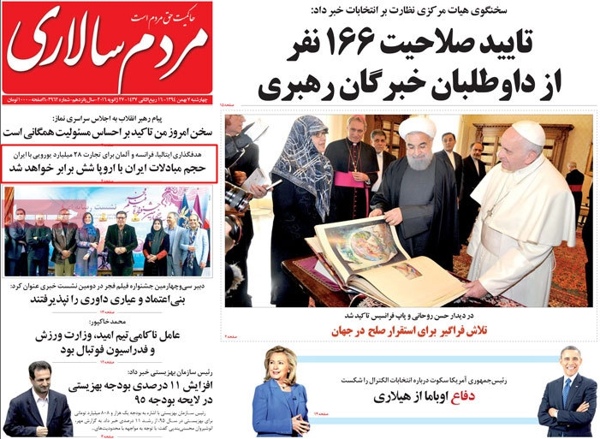 White House’s stance nears closed to that of Iran and Russia regarding the Syrian crisis.

Hashemi Rafsanjani was qualified to vie for membership in the Assembly of Experts but Hassan Khomeini was disqualified by the vetting body. 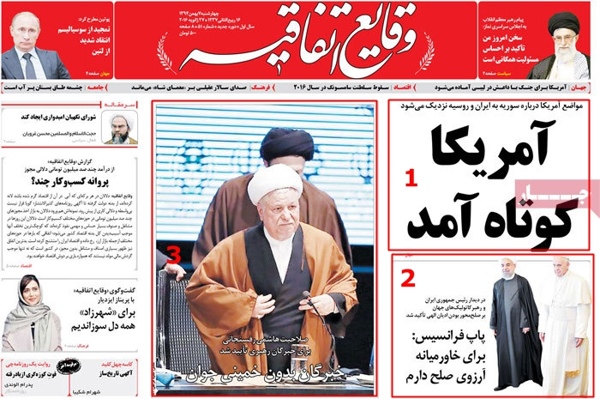 1. Iran restarts saffron exports to US after 15 years

5. Iran economy potent to attract $32b as finance; deputy minister

6. Italy to finance for Airbuses for Iran 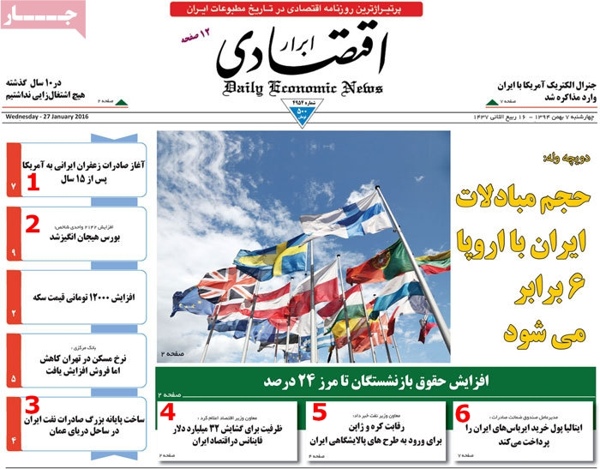 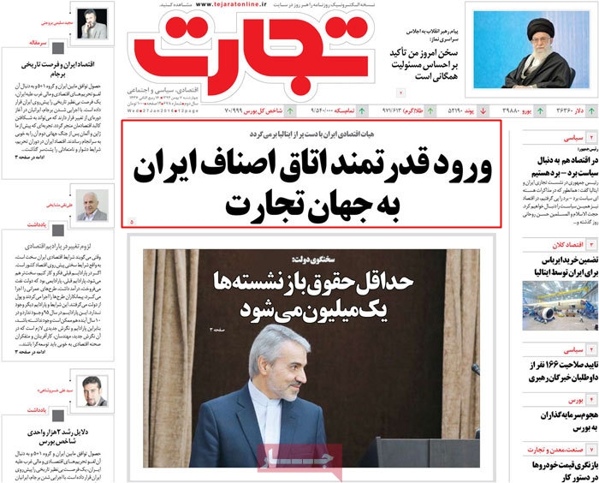 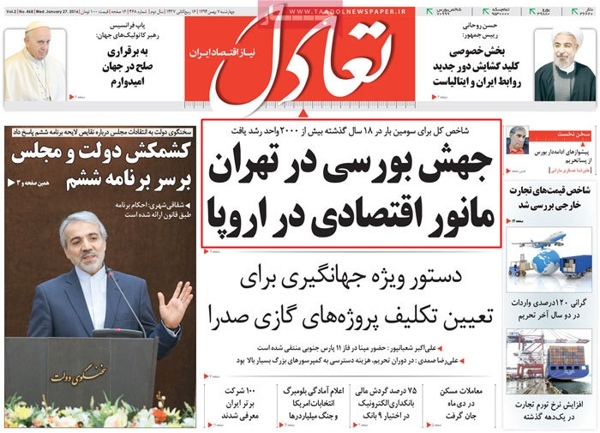 – I am a humble servant of Iranian people: Young Khomeini

Hassan Khomeini was disqualified by the Guardian Council to vie for membership in the Assembly of Experts. 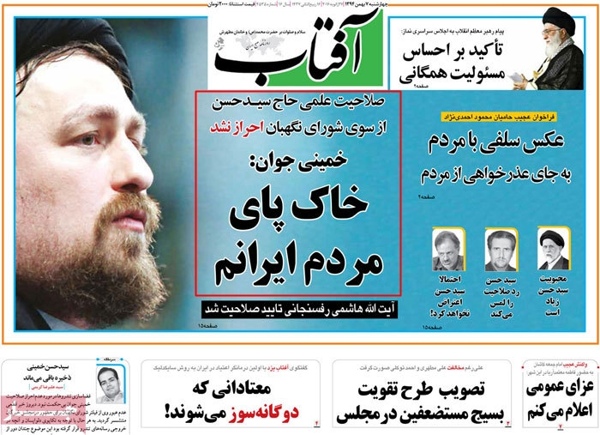