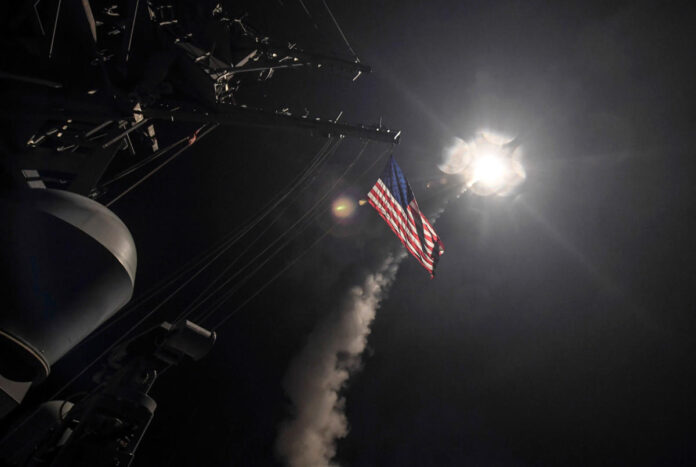 An analyst says the United States’ recent missile attack on a Syrian airbase will only play into the hands of terrorists and infuse new life into their activities.

Political commentator Farzan Shahidi has weighed in on Washington’s military aggression against Syria. The following are his comments on the incident as published in Basirat Political Centre’s website:

US First Military Aggression on Syria

The Trump administration’s first military intervention in Syria began to unfold on Friday, April 7, when the US targeted the al-Shayrat airbase in the Syrian province of Homs with 59 Tomahawk missiles.

So far, the attack has left at least 10 people dead and several wounded, among them civilians. Nine Syrian jet fighters were destroyed in the missile strike as well.

Objectives of US Missile Attack

The White House’s pretext for the missile strike was the unsubstantiated allegation that Damascus used chemical weapons in the town of Khan Shaykhun in Syria’s Idlib province. Washington announced the missile attack was a punitive measure against the government of Syrian President Bashar Assad. The US claimed it targeted the runway, fuel depots and jet fighters at the al-Shayrat military airbase. The Pentagon also claims the airbase was used to stockpile chemical arms.

Choosing the al-Shayrat military airbase as the target was a calculated move. One of the goals and ambitions of the US is to undermine the strength of the Syrian army and Air Force in order to tip the balance of power in the Syrian conflict.

The Syrian Air Force backed by Russian warplanes has managed to carry out targeted and successful attacks against the positions of terrorist groups and gain the upper hand in the conflict. Therefore, striking Syrian targets will reduce the Syrian army’s power in the current war. In comments following the US missile strike, US President Donald Trump said the attack was in line with Washington’s vital national interests. He asked all countries to join the US to, in his words, end killing and bloodshed in Syria. According to American sources, Russia had been informed prior to the attack. Russian troops had been told to leave the al-Shayrat military airbase, so Russian forces and military hardware were not harmed in the attack.

Washington’s having informed Moscow of the attack beforehand suggests that the US is not seeking direct confrontation with Russia in Syria. The US missile strike followed the UN Security Council’s Thursday meeting convened to review the chemical incident in Khan Shaykhun. The session had ended without a vote on the proposed draft resolutions.

“The Islamic Republic of Iran, as the biggest victim of chemical weapons in contemporary history, denounces any use of chemical arms irrespective of [who] the perpetrators and victims [are], and at the same time, regards using this pretext to take unilateral action as dangerous, destructive and contrary to the principles of international law,” said the spokesman.

He said Iran decries the missile attack on Syria by American vessels, and believes the move will only strengthen dwindling terrorists and further complicate the situation in Syria as well as in the whole region. He said the attack was conducted under the pretext of a suspected chemical attack in Idlib, whose timing, perpetrators and beneficiaries remain in a shroud of secrecy.

The missile attack on al-Shayrat airbase in Homs province was the first direct and officially announced US military strike on a Syrian military base, which was unprecedented and suggests a change in the US policy vis-à-vis Syria. What is noteworthy, and at the same time contradictory, is that Trump, both during his election campaign and after assuming office as president, always took a swipe at Barack Obama’s policies and approach toward the Syria crisis. Trump also questioned Obama’s allegation regarding the use of chemical weapons in 2012. But the recent US missile strike brought to light the fact that Trump, too, believes the Syrian army has used chemical arms. The only difference is that Obama did not take military action against Syria. However, Trump got engaged in military intervention at the beginning of his tenure as president.

With this attack, political and field equations in Syria have entered a new phase, and efforts by Iran and Russia to establish peace might be undermined. Until the attack took place, Syria and its allies, Iran and Russia, had the upper hand in the Syria conflict. But the US move has served as a shot in the arm and a new green light for terrorists and their regional supporters. Moreover, the Syrian National Alliance, which is the official opposition authority in Syria, has welcomed the US attack and called for the continuation of such strikes.

Ahmad Ramadan, the spokesman for the Syrian National Alliance, says the opposition coalition embraces the missile attack and calls on the White House to destroy the Assad government’s capabilities in such a way that Syria would not be able to use warplanes in its attacks. The European allies of the United States together with Saudi Arabia, Turkey and the Israeli regime have all welcomed Washington’s military aggression against Syria, which gives Trump an open hand to assume the leadership of the opposition and militants and exert more pressure on Syria, Russia and the resistance front. Of course, it is unlikely that Trump is trying to open a new front in Syria and west Asia, because any military action, especially one against Syria, would harm Washington-Moscow relations and pit the US against Russia. Naturally, Trump and his Cabinet wouldn’t like to see such a thing happen, and that is why voices opposing the US strike on Syria are being heard inside the United States.

To cap it all, we can say that the US missile strike was conducted on a small scale under the pretext that Damascus used chemical arms, so that, on the one hand, the strike would be justifiable to the international public opinion, and on the other, the US would avoid a serious confrontation with Russia. Furthermore, by adopting a security-military approach at the beginning of his presidency, Trump is trying to redress the image of Washington’s failed diplomacy in the region and in the whole world, which is a legacy of the Obama administration, and to present himself as a powerful and influential figure. It is not clear whether or not the novice US president will succeed or not, and, hence, he should be awaiting the negative consequences and ensuing challenges of this scenario.