Zarif Raps US’ Hypocrisy as Trump Snaps Back Anti-Iran Sanctions 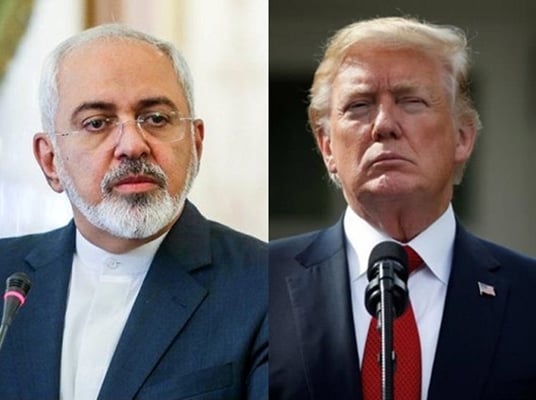 Iranian Foreign Minister Mohammad Javad Zarif has lashed at the US for its hypocritical claim that it’s worried about the conditions of Iranian people, as US President Donald Trump signed into law the re-imposition of the anti-Iran US sanctions.

Zarif said the return of US sanctions on Iran’s aviation industry shows the country does not really care about the Iranian people.

“The Trump Administration wants the world to believe it’s concerned about the Iranian people,” Zarif tweeted.

“Yet the very first sanctions it re-imposed have cancelled licenses for sales of +200 passenger jets under absurd pretexts, endangering ordinary Iranians. US hypocrisy knows no bounds,” he said.

Trump, who withdrew the US from the 2015 nuclear deal in March, re-imposed anti-Iran sanctions on Iran’s automotive and metal sectors, gold trade, aviation industry and other fields on Monday.

After the nuclear deal came into effect in January 2016, Iran signed contracts with western firms to purchase over 200 passenger planes. But the return of US sanctions will most likely prevent completion of the contracts, as Washington has revoked export licenses needed by European plane makers due to their heavy use of US parts.

At least 2,000 Iranian people have lost their lives in plane accidents since the 1979 Revolution, which toppled the US-backed regime of Shah and led to global sanctions on the Islamic Republic.

After ordering the return of sanctions, Trump threatened that there will be “severe consequences” for those who continue trade with Iran.

However, the EU is seemingly defying the threat. The EU on Monday updated a so-called blocking statute that seeks to protect European companies from any penalties imposed by the US for doing business with Iran.

The measure threatens companies with penalties if they comply with American sanctions, putting some in a bind, Washington Post reported.

In a statement Monday, the EU, UK, France and Germany said they “deeply regret” the US action.