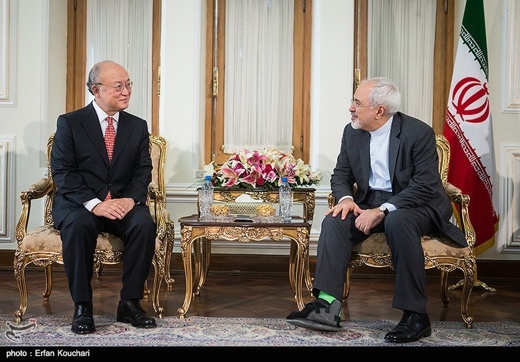 The IAEA chief has voiced readiness to continue cooperation with Iran to implement the Roadmap agreement “in a positive atmosphere”.

Iranian Foreign Minister Mohammad Javad Zarif and Director General of the International Atomic Energy Agency Yukiya Amano conferred on continued cooperation on the implementation of a Roadmap signed between the two sides.

During the meeting held at Iranian minister’s residence in New York on Friday, Amano voiced satisfaction with his last week’s visit to Iran.

The UN nuclear chief voiced preparedness to continue cooperation between Iran and the IAEA on the implementation of the Roadmap signed between the two sides on July 14, 2015 “in a positive atmosphere.”

At the meeting, Zarif, who is also the country’s chief nuclear negotiator, welcomed measures taken by Amano to put the Roadmap agreement into action.

He expressed hope that the case of allegations against Iran would be closed in due time thanks to the positive cooperation between the two sides, and that Tehran and IAEA will enter into the implementation of the Joint Comprehensive Plan of Action (JCPOA) in the new atmosphere of cooperation.

Amano paid a visit to Iran on Sunday and held a series of meetings with high-ranking Iranian officials.

During his trip, Amano also attended an Iranian parliamentary session held to review JCPOA, the text of a recent nuclear deal finalized by Tehran and world powers on July 14.

Head of Atomic Energy Agency of Iran (AEOI) Ali Akbar Salehi said afterward that Amano left Tehran while he was satisfied (with his trip).

Salehi also expressed hope that past and previous issues about Iran’s nuclear energy program would be concluded by the end of the year.

Amano also paid a visit to Iran’s Parchin military site on Sunday, where he toured some of the workshop locations at the compound that have been the subject of unfounded allegations, according to the AEOI spokesman.

Iran and P5+1 (Russia, China, the US, Britain, France and Germany) finalized JCPOA in the Austrian capital of Vienna onJuly 14.

On the same day, Iran and the IAEA signed the Roadmap agreement for the clarification of past and present issues.

As part of the Roadmap, the IAEA is required to finish its investigations into Iran’s nuclear activities and submit a report to the agency’s board by December 15.