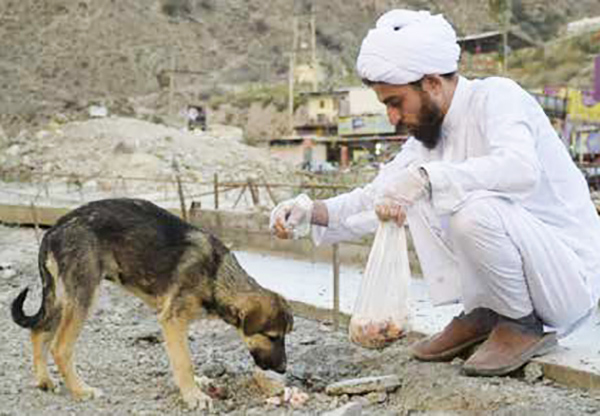 A young Iranian cleric, who once became famous for donating his kidney to a kid, is also member of an animal protection group who feeds and rescues stray animals.

Here’s IFP’s translation of a report by Iran Newspaper:

The young Iranian cleric Komeyl Nezafati used to visit different hospitals to give hope to patients suffering from special diseases. In one of these visits, he met the eight-year-old Sajjad in the dialysis section. Sajjad had lost both of his kidneys years ago and suffered a lot. Nezafati donated one of his kidneys to the kid, who is a healthy boy today and goes to school.

After three years, this 32-year-old cleric has once again appeared in newspaper headlines; this time because there are photos on the Internet showing him rescuing a sick dog and feeding stray dogs and cats.

In his interview with Iran, he has talked about his life, as well as the day he encountered a puppy dog and couldn`t stay indifferent …

We feed more than 100 stray dogs and 150 stray cats in the city and the suburbs. In cooperation with two veterinarians, we also take to clinic the diseased animals or the ones wounded in accidents.

He says “I was born in Amol [in northern Iran], I live in Qom and I work in Tehran`s Firouzgar hospital as special diseases advisor!”

“Eight months ago, I went to Eslamshahr [a town near Tehran]. In a street, I encountered a puppy dog in a disastrous condition. Obviously, he was unable to stand on his feet because of excessive hunger. I learned that he was left behind. I should admit that I was afraid of dogs since my childhood and never approached them,” he said.

“But at that moment I tried to overcome my fear. I bought a pocket of milk and poured it in a pot. The excessively hungry animal began to drink it, then he barked and shook his tail for me. I had a good feeling, so I took a photo of the puppy and posted it on Instagram. Less than 24 hours later. I was surprised by people`s numerous thank you messages.”

“I re-counted the story to my father. For many years, he keeps several cats in our house because of the guilt that never left him since his teenage years. As a teenager, he threw a cat into the river and witnessed his death. Thereafter he has a permanent feeling of guilt. My father`s words and encouragement motivated me to be active in protection of animals as a member of a youth group named Mehr … we feed more than 100 stray dogs and 150 stray cats in the city and the suburbs. In cooperation with two vets, we also take to the clinic the diseased animals or the ones wounded in accidents.”

Islam is the religion of kindness. Our Imams emphasized that we should always be kind towards animals; they even gave their own piece of food to animals.

If an animal is unclean in Islam, by no means does it prevent us from helping them and saving them from death. Islam insists on being kind to animals: “Rescuing an animal is no lesser than praying,” Nezafati says.

“If cat or dog is unclean, this is a jurisprudential question, we can`t say our prayers with clothes touched by a wet dog … Islam is the religion of kindness. Our Imams emphasized that we should always be kind towards animals; they even gave their own piece of food to animals. While we hear that dogs are unclean, according to scholars` fatwa there is no problem with buying, selling and keeping guardian dogs, hounds and sheepdogs.”