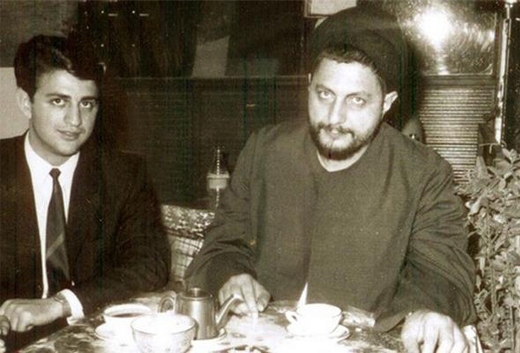 Aftab-e Yazd addresses the critics of the government by recalling a memory of the late Sadegh Tabatabai.

Seyyed Sadegh Tabatabai*, an associate of the late Imam Khomeini during his years in exile in France, passed away at the age of 71 on Saturday (February 21).

On February 22, Ehsan Razzaghi published a piece in Aftab-e Yazd daily which featured a memory of the late Tabatabai to urge the principlist critics of President Rouhani’s government to rethink their nuclear stance. The following is the translation of the piece:

I am using the passing of Sadegh Tabatabai as a good excuse to recall a memory and make the principlist critics of the government rethink their fiery stances in the days when nuclear talks with P5+1 get closer to their final critical moments.

Let’s assume that their stances are honest and based on good intentions, not an excuse to sandbag and find a way to deflect attention from numerous corruption and mismanagement charges lodged against them for the eight-year performance of their faction [when the principlists were in office].

The late Sadegh Tabatabai once recalled a memory and said, “Yasser Arafat once called the office of Imam Musa Sadr (May their souls rest in peace) and asked Imam [my uncle] to go and see him.”

“When we got to Arafat’s office in Beirut, it was around 1:00 a.m. We were in a big room with a big table in one corner. A few minutes later, Arafat came in. After greetings, he told Imam Musa Sadr that Israelis have sent him a gift and asked a cardboard box which was sitting on the table there to be brought to him.”

“When he opened the box, we saw the severed head of a Palestinian newborn. As Imam Musa Sadr looked at it, Arafat turned to Imam and asked, ‘Oh, brother! What shall I do with this gift?’ By that question Arafat seemed to be asking how his Lebanon-based Palestinian forces (the Fatah movement) should react to attacks by the Zionists.”

“What Imam said in response was strange. ‘Oh, brother! A revolutionary man is not necessarily the one who always pulls a trigger; to be a revolutionary, sometimes you should avoid pulling the trigger. When the enemy seeks to allure you to a path where it can carry out its plans, the real revolutionary is the one who does not fall into the enemy trap and avoids getting stuck in a vicious circle of revenge which culminates in nothing but the killing of innocent people’.” (I don’t recall the exact wording, what I just said was a paraphrase)

If there are people in the West and among those Zionists who are trying to enrage us today, we should take heed of such a strategy, and this is a strategy the government of moderation – backed by the Supreme Leader – has pursued in nuclear talks [with the West], trying its utmost to have the unjust sanctions imposed against the country lifted.

Sadegh Tabatabai was an Iranian writer, journalist, professor at the University of Tehran and politician who served as deputy prime minister from 1979 to 1980. He was the deputy minister of the interior. From 1982 until 1986, he also served as Iran’s ambassador to Germany.