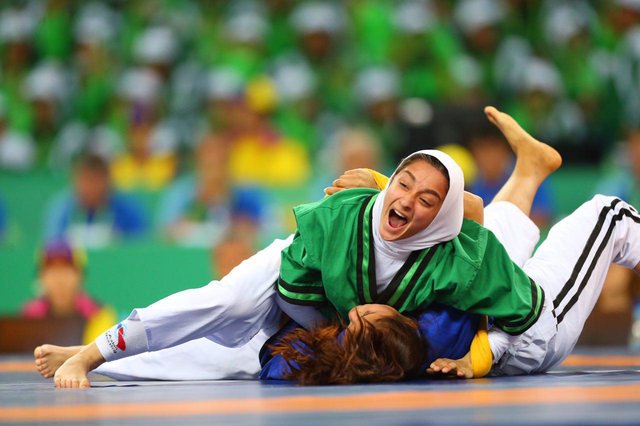 The United World Wrestling has hailed in a report the victory of Iranian Female Alysh Wrestler Zahra Yazdani in the 5th Asian Indoor and Martial Arts Games in Ashgabat, Turkmenistan.

The United World Wrestling has written in its report that the traditional wrestling matches of the 5th Asian Indoor and Martial Arts Games came to an end in Turkmenistan’s capital Ashgabat with the host country winning most of the gold medals.

In the traditional category, Turkmens won 23 gold medals of the 26 possible ones while Uzbekistan and Mongolia won two and one gold medals, respectively, to be the only countries that won the championship except for the host.

Pahlavani wrestling bouts were also held in three weight categories, where the Iranians won all the gold medals, according to a Farsi report by the Young Journalists Club (YJC).

Zahra Yazdani was the only Iranian gold medallist in in Belt Wrestling Alysh. Yazdani’s family has introduced World and Olympic champions such as Reza Yazdani and Hassan Yazdani. Now the third champion from the Yazdani family is an 18-year-old girl named Zahra Yazdani. She snatched the gold medal in the weight category of 55 kg.

At the end of the tournament, Turkmenistan won 62 gold medals in the traditional and belt wrestling Alysh competitions to rank first among 65 countries of the Oceania.