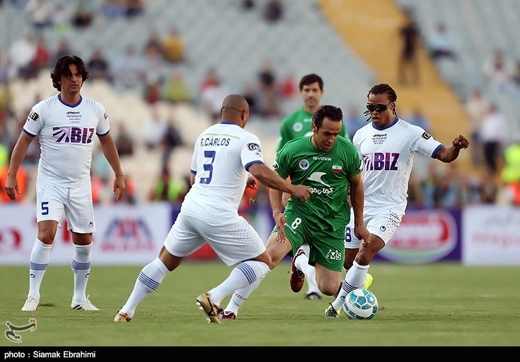 The charity match in Tehran was to raise money for MS patients.

World Stars football team beat Iran’s All-Star 3-0 in a charity match held in Tehran’s Azadi Stadium in front of about 50,000 fans on Friday.

Brazilian defender Roberto Carlos was on target in the 24th minute with a free-kick.

Former FIFA presidential candidate Luis Figo made it 2-0 in the 31st minute. He chipped the ball over Iranian legendary goalkeeper Ahmad Reza Abedzadeh.

With one minute remaining to the halftime, Pauleta scored for World Stars.

“I am so happy to be here. We expected Iran coach Carlos Queiroz to lead us in the match but I don’t know what happened he didn’t sit on the bench; however he stays in our hearts forever,” World Stars captain Michel Salgado said after the match.

The match was held to raise money for MS patients.

The World Stars team takes the field once a month in a country to raise funds for people who are suffering from a disease or disaster. Support for Ebola patients in Africa was one of the latest fundraisers of this team.