World has no option except clinch a deal with Iran: President 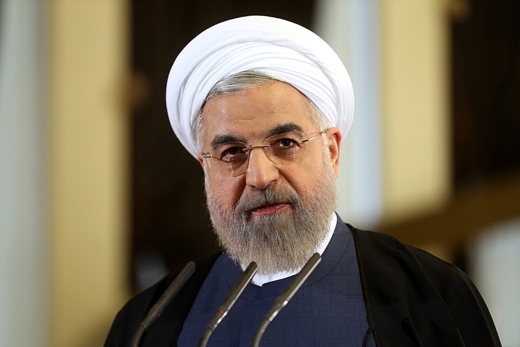 President Hassan Rouhani said on Sunday that Iranians and the friendly countries are happy with a nuclear understanding between Iran and P5+1 and all know that they have no option except clinch a deal with Iran. He made the remarks in a meeting with a group of officials.

He said the enemies of Iran are not satisfied with the success of nuclear talks.

Iran has always called for termination of economic, financial and banking sanctions, he said.

The Islamic Republic of Iran never seeks to invade any country as the Iranian history is good evidence to such principle, said President Rouhani.

“If anyone dares to violate the right of Iranian people, we will defend our rights,” he underlined.

Recent nuclear talks in Switzerland were very complicated and tough in the country’s history, he said.

Referring to presence of global military and economic powers in these talks, he said if the level of talks had not enhanced, there would be no progress.

In this round of talks, the two sides reached agreement on continued activities of Natanz, Fordo and Arak heavy water reactor, he said.

There is no doubt that the two sides took concrete steps but writing of final deal will be a very tough job, he said.

“During talks Iran always called for termination of economic, financial and banking sanctions and there was no word on suspension. Otherwise, there would be no deal,” the president stated.

The world knows that it had no option except clinching a deal with Iran as the great Iranian people are determined to attain their goals and never give up to pressures or sanctions, he said.

He advised the officials to spare no efforts to serve nation and do their utmost to attain economic success and development.