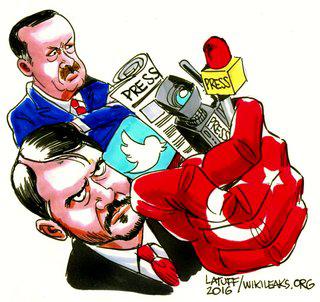 The connection of the Turkish president Recep Tayyip Erdoğan΄s family with the oil smuggling of the ISIS terrorist group has been revealed after WikiLeaks leaked emails from the Turkish energy minister, and Erdoğan΄s son-in-law, Berat Albayrak.

According to a report covered by Khabar Online in Farsi, Albayrak’s emails seem to confirm the not-so-recent accusations, since the energy minister is appealing to be the “unofficial” owner of the oil company Powertrance which is importing oil from the ISIS-held territories in Northern Iraq to Turkey.

In late September 2015, a Turkish Marxist hacking organization, Red Hack, claimed that it has access to almost 20 gigabyte of data from Albayrak’s personal email accounts.

Information and articles regarding the email’s content began to go online; however, the Turkish justice system decided against the publication and reproduction of the emails, thus implying their authenticity.

The newest accusations that the Turkish government – and, specifically, members of Erdogan’s family – has an active role in the oil smuggling from areas that are controlled by the ISIS, were between the most important subjects that were temporarily released. The leaking of all the emails from the Turkish energy minister by WikiLeaks seem to confirm these allegations.

Here is the searchable archive of Albayrak’s emails