West must abide by obligations toward Iran: Cleric 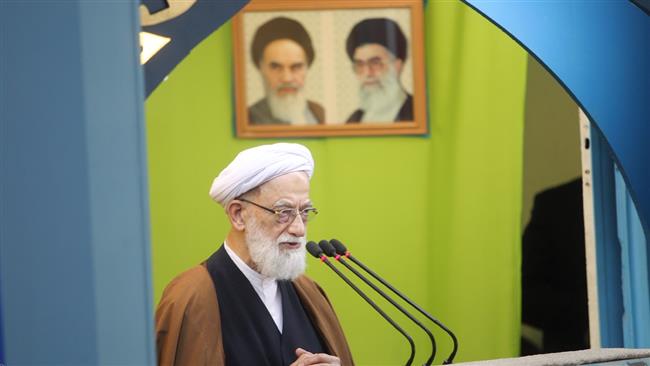 A senior Iranian cleric has said the joint statement showed that the West has recognized Iran's right to peaceful nuclear energy.

A senior Iranian cleric has reaffirmed the country’s commitment to a mutual understanding reached between Iran and P5+1 in Switzerland, warning the West against violation of its obligations as per the joint statement.

“Iran will abide by whatever it has agreed within this framework and will live up to its promise,” Ayatollah Mohammad Emami Kashani said in his sermon to worshippers at the weekly Friday Prayers in Tehran.

“But if you break your promise, so will Iran,” he added, addressing P5+1.

He said the joint statement issued by Iran and six powers in the Swiss city of Lausanne sets an “excellent and fundamental” general framework for further talks between them.

The senior cleric added that the statement showed that the West has recognized Iran’s right to peaceful nuclear energy, which the Western governments used to refuse to accept as Iran’s right.

Emami Kashani noted that the second important issue included in the statement is that the sanctions would be “lifted” instead of being simply “suspended.”

“They initially did not accept to remove the sanctions, but now they’ve accepted,” he said, adding that the ways the sanctions would be lifted depends on upcoming discussions for a final accord.

Following the end of eight days of intensive nuclear negotiations in Lausanne on Thursday, Iran and P5+1– the United States, France, Britain, Russia, China and Germany – issued a joint statement, saying that no Iranian nuclear facility will be shut down or suspended and all sanctions against the Islamic Republic will be lifted.

Less than 24 hours after Iran and P5+1 reached the mutual understanding over Tehran’s nuclear program, the US published a fact sheet detailing parameters for the Joint Comprehensive Plan of Action (JCPOA). The sheet, however, seems to have differences with the original joint statement.

While the agreed plan predicts a 10-year framework of action, the White House fact sheet says uranium enrichment at Iran’s Fordow facility would stop for at least 15 years.

Although Iran has reiterated that all sanctions have to be lifted simultaneously as soon as the final deal comes into force, the US version indicates that the architecture of nuclear-related sanctions will be retained for much of the duration of the deal.

The US fact sheet also says the bans will be also snapped back into place in the event of any non-performance. It adds that the UN Security Council could re-impose all previous sanctions in case the issue of non-performance cannot be resolved through negotiations.