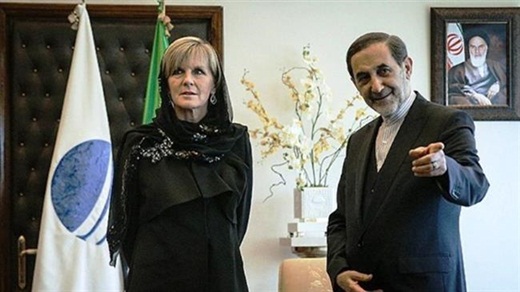 Cooperation between Iran and Australia can be very useful for the establishment of peace and calm in the Middle East and the Pacific, said Velayati.

A high-ranking Iranian official says increased cooperation between Iran and Australia can bolster security in the Middle East and facilitate the fight against ISIL.

Ali Akbar Velayati, who is the president of the Center for Strategic Research of Iran’s Expediency Council, said Saturday that Tehran and Canberra have decided to strengthen their “constructive” relations, which he said, could help establish peace and security in the Middle East, especially in Iraq.

“Cooperation between Iran and Australia, as two countries that have good relations, can be very useful for [establishment of] peace and calm in the Middle East and countries in the Oceania,” said Velayati in a joint press conference with the visiting Australian Foreign Minister Julie Bishop.

Velayati, a senior aide to Leader of the Islamic Revolution Ayatollah Seyyed Ali Khamenei and a former Iranian foreign minister, added that joint efforts by Iran and Australia could be very effective in fighting terrorism and establishing security in these regions.

The Australian foreign minister, for her part, called her trip to Tehran as very positive, saying that in her meeting with Velayati, she discussed Iran and Australia’s common objectives including providing support for the Iraqi government in its fight against ISIL terrorists.

Bishop said Australia is determined to take part in the international battle against the ISIL terrorists, adding that Canberra will support the Iraqi government in its fight against the Takfiri group, Press TV reported.