Uselessness is part of contemporary art 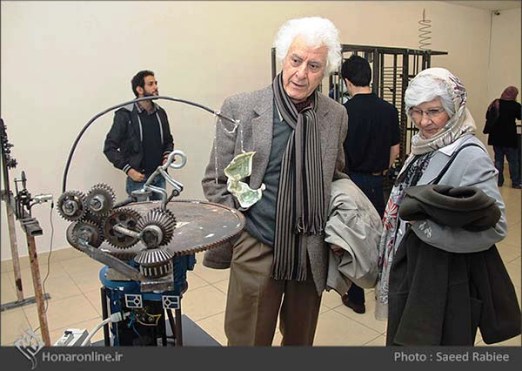 The exhibition which showcases a collection of artworks by Mr. Tanavoli’s students is intended to define the concept of uselessness in arts.

Honaronline.ir has filed a report about a Tehran exhibition entitled ‘Useless Machines’ which opened on December 12 in Mah-e Mehr Art Gallery with Parviz Tanavoli, a well-known sculptor and the instructor of ‘Useless Machines’ workshop, in attendance. The exhibition which showcases a collection of artworks by Mr. Tanavoli’s students is intended to define the concept of uselessness for visitors. The following is a partial translation of the report:

“The artworks made over this 2-month intensive educational course are a combination of art with either industry or machine. In modern life machines have a major role to play and can be a source of inspiration. It’s worth noting that we did not seek to find machines with useful functions. Far from that; we planned on creating useless machines,” Tanavoli said.

“I supervised the whole project and Ms. Mona Pad, a graduate in industrial design, was in charge of all technical matters and the implementation of the project. In fact, she helped artists with the choice of machine structure and power,” he added.

“Such artworks are new in Iran. However, for five decades, artists elsewhere in the world have adopted machines in their works and injected mobility into them. We have done this project to take the first step in this field, letting Iranian visitors get familiar with moving sculptures whose movement is aimless,” he stated.

As for the importance of uselessness in the contemporary art, he said, “Uselessness has become so common in art and many artists are after it. Time is gone when art was in pursuit of moral or educational aspects; now artists want to present works which portray the useless aspects of life. We come across pointless matters in life on a daily basis which we put up with and leave behind. Such questions have a great impact on artists and thus throughout the world they take the concept of uselessness very seriously and base part of their art on it.”

On humor in artworks he said, “There is a great deal of humor in such works. In general, Iranians take a humorous look at useless tasks. […] Humor is part of Iranian character and that’s the secret to their survival in the face of hardship, because such approach helps them put up with problems.”

Recalling his past experience with machines, he concluded, “I used machines 50 years ago to make moving sculptures and such artworks still exist, but since then I have never used machines in my works.”

Among artists contributing to the exhibition were Farish Alborzkouh, Kourosh Ameri, Leila Taheri and Amir Mousavizadeh.