US Withdrawal from Syria, Afghanistan Hit Headlines in Iran 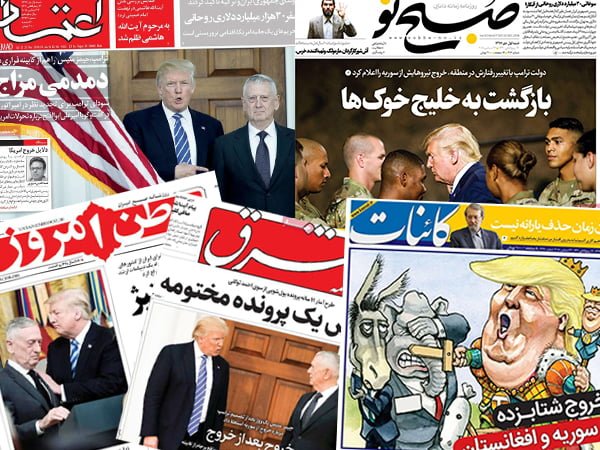 IFP has taken a look at the front pages of Iranian newspapers on Saturday, December 22, 2018, and picked headlines from 20 of them. IFP has simply translated the headlines and does not vouch for their accuracy.

All newspapers in Iran covered the abrupt decisions by US President Donald Trump to withdraw all US forces from Syria, and half of its forces from Afghanistan. Almost all editorials today were dedicated to the issue, and many headlines described the withdrawals as a victory for Iran and the Resistance.

Also a top story was the resignation of US Secretary of Defence Jim Mattis, which followed Trump’s decision to pull the US forces out of the Middle East.

The other top story today was the visit of Iranian President Hassan Rouhani to Turkey, and his meeting with Recep Tayyip Erdogan, during which the two sides agreed to counter the US sanctions and boost the value of bilateral trade to $30 billion.

A tragic fire at an elementary school in Zahedan in south-east of Iran, which killed four schoolgirls, also received great coverage.

1- We Might See New Form of Syria without Assad: Analyst

2- Iran Not to Be Happy with Our Withdrawal from Syria: Trump in Delusional Comments 2- Size of Brides’ Dowries Shrinking Due to Growing Prices

3- Trump’s Complicated Game: Why US Seeking to Leave Syria, Afghanistan 2- Reasons for US Withdrawal [Editorial] 4- Iran to Get Out of Economic Blockade with Victory: Top Security Official 1- Factions Disagree over Remaining in or Leaving JCPOA 2- Seven Reasons for US Withdrawal from Syria

3- Army of Generals in Ankara: Why Rouhani Took All His Economic Team to Turkey? 2- Defeat of US in Syria [Editorial] 2- Necessity of Creating Special Platform for Children on Internet 2- Outdated Choices: Why Iranian Official Submission to Oscars Was Not Accepted? 1- First Step of US’ Withdrawal from Region

2- We Want Someone Like Ferdowsi to Introduce Epic of 1979 Revolution: Cleric 1- US Withdrawal from Syria, Afghanistan: Deceit or Escape?

2- US Bans Sale of Pharmaceuticals to Iran, but Exports Genetically-Modified Plants 1- Behind Scenes of Trump’s Withdrawal Decisions

3- US Withdrawal from Syria: Neither Tactical, nor Strategic [Editorial] 2- US’ Cruel Sanctions against Iran Definitely a Terrorist Move: Rouhani 1- Most Beautiful Night of the Year [Yalda]

2- Despite All Economic Hardships, People Spent Longer Hours Together This Year 2- Security Repercussions of US Withdrawal from Syria, Afghanistan