US Seizure of Iran’s Assets is “Blatant Theft”: President Rouhani 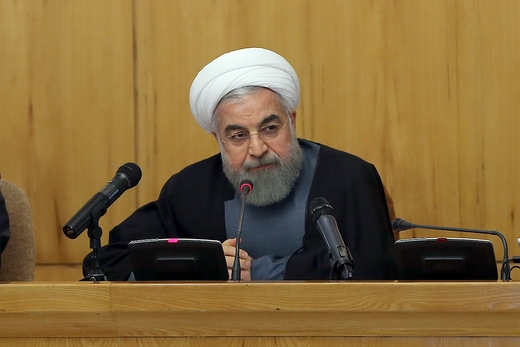 Iranian President Hassan Rouhani lashed out at a recent US court ruling to confiscate nearly $2bn of Iran’s property, calling it a clear example of theft and a big legal scandal, and stressing that no one can encroach upon the rights of the Iranian nation.

Here are Rouhani’s remarks, as reported by the President’s website and translated by IFP.

“That a court or legislature in another part of the world would make decisions about the Iranian nation’s rights and property is totally illegal and in contradiction of international laws, based on which central banks are legally immune in all parts of the world,” Rouhani said in a cabinet meeting on Wednesday.

“No thief can be proud of his or her theft and think that the stolen properties are his or hers,” the Iranian president stressed, telling Americans to understand that Iran’s property cannot be looted.

Such pressures and illegal rulings by the US judiciary and congress are “International theft and a legal scandal” for the US, he noted, expressing surprise over an “unprecedented” move by the US Congress to put the judiciary under pressure over the issue.

Rouhani stressed that, in politics, the US move means the continuation of hostilities against the Iranian nation, and vowed to resist the incorrect verdict and reclaim the country’s rights.

“These assets belong to the Iranian nation, and any encroachment upon them is considered hostile and illegal,” he added, emphasizing that the Americans will not be able to use the assets without facing repercussions.