US Problem with Iran Not Nuclear Program but Regional Influence: Hezbollah Chief 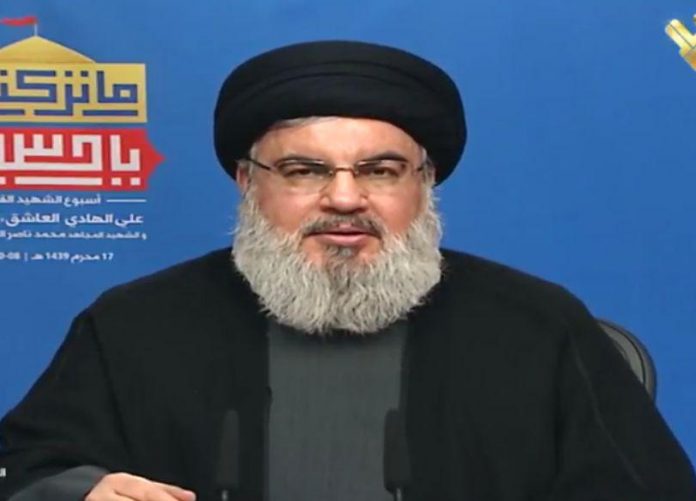 Secretary General of Lebanon’s Hezbollah Movement, Sayyid Hassan Nasrallah, says Washington’s main problem with Iran is not the country’s nuclear program but its regional role which thwarts the US plots in the Middle East.

In a Sunday address to an event marking the martyrdom of two Hezbollah commanders in Syria, Nasrallah said the US and Israel lie about Iran’s nuclear program.

Washington and Tel Aviv’s main problem with Iran is not the country’s nuclear program but its growing influential role in the region, he said, according to a Farsi report by IRNA.

Nasrallah referred to the failure of the US and Saudi Arabia’s projects for the region and added their plots in Iraq, Syria and Lebanon have been foiled. “Signs of their failure are also seen in Yemen.”

He stressed that Iran has thwarted the projects of the US and Saudi Arabia in the region.

“Iran is the main element behind the failure of the US and Saudi Arabia’s projects in the region. That’s why they are raising the issue of Iran’s nuclear program but their main problem is not Iran’s program because Iran has never sought and will never seek to produce nuclear bombs,” he added.

The Hezbollah chief also said the resistance movement has the honour of playing a role in thwarting the US and Saudi Arabia’s regional plots.

He stressed that the Americans are seeking retaliation against those who thwarted their projects in the region.

ISIS Must Not Be Abandoned to Its Fate

Nasrallah went on saying that the fight against ISIS should go ahead until final victory “because the ISIS’ survival is a threat to Iraq, Syria and Lebanon.”

He warned that ISIS seeks to redeploy its forces in West Al-Qalamoun and Arsal Heights as part its larger plan to return to Lebanon.

About two months ago, the resistance movement along with the Lebanese army managed to retake eastern regions of Lebanon from ISIS militants.

The secretary general of Hezbollah also criticized the US for its stance towards ISIS and said the Americans have delayed the eradication of ISIS in the region through acts of sabotage.

“We should not abandon ISIS to its fate because the terrorist group is a cancer which must be eradicated otherwise it will engulf the whole region” he noted.

He stressed that US warplanes prevent resistance forces from advancing towards ISIS hideouts in Syria and added eradication of ISIS in Syria is not on the US agenda.

Hezbollah Not to Change Stances under US Sanctions

He stressed the new sanctions will not change Hezbollah’s anti-US stance.

“Those who are ready to sacrifice their lives in defence of their cause will not sit back against financial sanctions,” he added.

He also thanked Lebanese officials for their efforts to protect the country’s economy against the sanctions.

Peace Achievable Only if US Stops Interference

Nasrallah referred to the latest statements by Saudi Minister of State for Gulf Affairs, Thamer al-Sabhan, who called for building a coalition against Lebanon’s Hezbollah, and said with such statements Saudi officials confess that Hezbollah has turned into a regional power.

He stressed peace and security will be restored to the region only if the US and Saudi Arabia stop meddling in the regional affairs and supporting terrorist groups.

“Today Saudi Arabia has imposed a war on Yemen and dispatched forces to Bahrain blocking any dialogue,” he said.

He called Saudi Arabia and the Zionist regime “threats” to regional peace and security and added there are substantiated documents proving the destabilizing role of Saudi Arabia in the region.

Hezbollah chief also called the movement one of the main pillars of real security for the region and added today the movement has become stronger. “We will sit back neither against US sanctions nor against Israel’s threats and Saudis’ horror- mongering.”