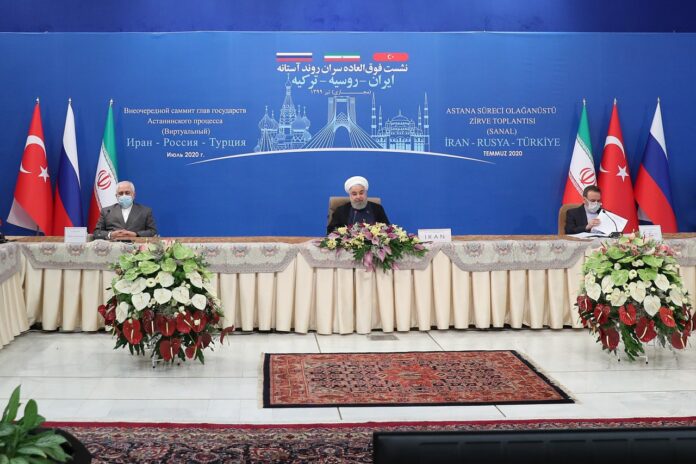 President of the Islamic Republic of Iran Hassan Rouhani has called for an immediate withdrawal of the “terrorist American forces” from Syria, whom he slammed as a source of instability in the Arab country and the entire region.

Addressing a video teleconference of the Astana Peace Process on Wednesday, President Rouhani said the illegitimate presence of the US regime’s occupying forces on Syrian soil has become a source of instability in Syria and the whole region.

By increasing the number of its illegal military bases in Syria’s oil-rich region on the eastern bank of the Euphrates River, the US is plundering the natural resources of Syria, the Iranian president said at the summit, held via videoconference.

“I emphasize that it is necessary for the terrorist American forces to leave the region, particularly Syria, immediately, and that the Syrian government’s sovereignty would prevail all over those territories,” President Rouhani added.

The Iranian president also described the Astana Peace format as the “only successful process” contributing to the peaceful settlement of crisis in Syria, saying Iran, Russia and Turkey –the three friends and guarantors of the Astana Process- should protect and promote the achievements of the format.

President Rouhani then underlined that Tehran, Moscow and Ankara share views on “common basic and unchanging principles” regarding Syria, which are protecting Syria’s solidarity and territorial integrity, respecting Syria’s national sovereignty and independence, and determination of the fate of Syria in the hands of Syrian people alone and through Syrian-Syrian talks without foreign interference.

The president then lashed out at the US government for imposing new unilateral and inhumane sanctions against Syria under the so-called Caesar Act, saying Washington is making such vain attempts to fulfill its illegitimate political objectives while the outbreak of the coronavirus pandemic has caused widespread health and economic problems in Syria as the Syrian people are in need of humanitarian assistance, including medical equipment and pharmaceuticals to combat the epidemic.

“Such measure taken by the US regime amounts to economic terrorism that violates the international law, the human rights, the international humanitarian law, and the sovereignty of nations,” President Rouhani added.

“The Islamic Republic of Iran condemns any sanction against nations in the world, particularly against Syria, and emphasizes that it will continue to support the people and legitimate government of Syria more vigorously,” President Rouhani underlined.

“Such illegitimate and inhumane measures from the US regime will not cause any disruption to the resolve of Syria’s friends and allies,” he added.

The president further reminded the US that economic pressures against Syria and punishing Syrians will not help it achieve what it has failed to obtain by military pressures and resorting to terrorist groups.

The president then called on the international community to address the problem of internally displaced persons in Syria and help the Syrian refugees return home. “This is a humanitarian issue and will also help restore peace, stability and trust-building among the Syrian people. Any move to make humanitarian aid conditional on the achievement of political purposes will disrupt this process.”

“Today, after more than nine years since the onset of crisis in Syria, the Islamic Republic of Iran still believes that the only solution to the Syrian crisis is a political one and that it has no military solution. As the guarantor states of the Astana Process, we always support Syrian-Syrian dialogue within the framework of the agreements made under the Astana Process, and reaffirm our determination to fight against the terrorism of Daesh (ISIS), al-Qaeda, and all of their offshoots across the entire region, as in Syria,” President Rouhani stated.

Iran proudly talks about the war on terrorism, the president said, paying tribute to top Iranian commander Lt. General Qassem Soleimani who was assassinated in a US airstrike in Iraq.

The US claims to be fighting against terrorism, but it has assassinated the “hero of war on terrorism” and his companions, President Rouhani noted, saying it reveals the US regime’s false claims about the battle with terrorism.

President Rouhani underscored that the war on terrorism must continue until it is totally eradicated in Syria and the region, but emphasized the need to protect civilian lives in this battle. “We must not allow the terrorists to use people as human shields.”

He then noted that the fight against terrorism in Syrian must be coupled with respect for the Arab country’s national sovereignty and independence.

“A united and independent Syria without the illegitimate presence of foreign forces will not only result in the restoration of calm to that country after long years of sufferings of its people, but also would contribute to the stability and security of its neighbors,” President Rouhani noted.

The Iranian president finally condemned an escalation of the Israeli aggression against Syrian soil, adding, “The Zionist regime’s measures, in addition to the occupation of the Golan region, are in violation of Syria’s sovereignty and are destabilizing factors that threaten regional peace and security, and such occupying regime (Israel) will be accountable for their consequences.”