US Not Interested in Defeating Terrorists in Iraq and Syria: Iran’s Leader 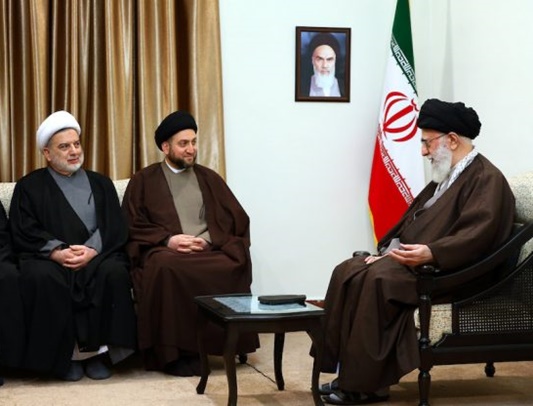 Leader of Iran’s Islamic Revolution Ayatollah Seyyed Ali Khamenei says the United States has never been after defeating Takfiri [extremist] terrorists in the Middle East, and wants to preserve some of them for its future intentions.

According to a report by IFP, Ayatollah Khamenei stressed on Sunday that the US never seeks to eradicate Takfiri terrorists, and is even trying to preserve some of them in the region to realize its future goals.

Speaking in a meeting with Chairman of the Islamic Supreme Council of Iraq (ISCI) Ammar Hakim and his entourage in Tehran, the Leader added, “Currently, Americans are not interested in the final defeat of Takfiri terrorists in Mosul and Syria.”

Ayatollah Khamenei referred to the ISIS terrorist group’s sale of Iraq’s oil, and said, “At that time, Americans just watched the movement of [ISIS’] oil tankers and refused to target them. Therefore, Americans should not be trusted.”

“Americans are always opposed to the power of Islamic countries, including Iraq, and one should never trust their smiles,” the Leader added.

Popular Forces Should Be Strengthened in Iraq

“Hashd al-Shaabi or popular forces are a great treasure and wealth for Iraq’s today and tomorrow, and should be strengthened and supported,” the Leader added, according to his official website

Members of the Iraqi parliament voted on November 26 to recognize Hashd al-Shaabi or Popular Mobilisation Forces as an official force with similar rights as the regular army.

Hashd al-Shaabi will come under full control of the armed forces, and will also enjoy the same rights and privileges as the army.

The parliamentary decree also stipulates that members of all of Iraq’s ethnic and religious groups will have the right the join Hashd al-Shaabi and they will be reorganized through the army after the Mosul liberation operation.

The Hashd al-Shaabi was formed upon a call by Iraq’s top cleric Grand Ayatollah Ali al-Sistani in the summer of 2014 when the ISIS terrorist group captured several Iraqi provinces and he urged civilians to take up arms and fight the radical group against further expansion.