“US Attacks Have No Effect on Syria’s Political Developments” 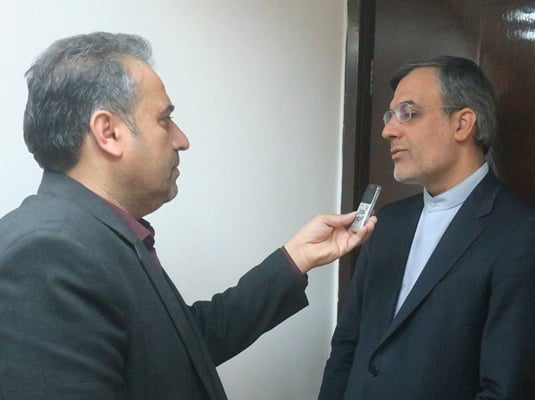 Hossein Jaberi Ansari, a senior assistant to Iran’s foreign minister in political affairs, says the US-led coalition’s recent attacks on Syria have had no impact on the country's field, military and political developments.

Speaking in a Farsi interview with IRNA in Damascus on Monday, Jaberi Ansari said the US, the UK, and France are considering themselves as the decision-makers in the world, and they pursue certain political goals under the pretext of human rights or other things which are by no means acceptable to any country.

Referring to attacks on Syria, he added, “The three countries attacked Syria on the pretext of the Assad government’s use of chemical weapons. It was an instrumental and political use of the issue, and the Islamic Republic was strongly and openly opposed to it.”

Jaberi Ansari emphasised that if a chemical attack has been carried out in the Eastern Ghouta, an opportunity must be provided for international chemical weapons inspectors to investigate the case.

“The position of the Islamic Republic has been repeatedly announced and Iran, as one of the main victims of chemical weapons in contemporary times, does not accept the use of such weapons by any party and under any circumstances.”

This Iranian diplomat also pointed out that Tehran hopes the conditions would be prepared for Syria to emerge out of the crisis as soon as possible in the context of the diplomatic efforts that Iran, Russia and Turkey are making within the framework of Astana Talks.

“The Islamic Republic wants to restore calm and security to all areas of Syria by maintaining its unity, territorial integrity and national sovereignty,” said Jaberi Ansari.

Iran’s top negotiator in the international peace talks on Syria will hold talks with a number of senior Syrian officials on the latest regional and international developments in the country on Monday.

Such visits are held on a regular basis, and the reports on the latest developments and diplomatic efforts made by the Islamic Republic of Iran within the framework of the Astana Talks are given to Syrians.

Syrian President Bashar al-Assad and Jaberi Ansari had earlier discussed the horizons ahead of the Syria crisis, especially within the context of the Astana-Geneva talks, by reviewing the latest political and political developments.

Multiple places in Syria came under attack by US, British and French military forces on April 14 after President Donald Trump ordered a military strike against the country despite international warnings against further escalation of the situation.

The three countries used an alleged chemical attack in the Eastern Ghouta suburb of Damascus last week as a pretext for their military action. They blame the Syrian government for the attack, without offering any evidence.

Syria has strongly rejected any role in the suspected attack, which came just as the Syrian army was about to declare full victory against the militants operating in the region.

Russia said the chemical attack was staged by desperate militants to provoke further intervention in the conflict by the West.