US Coercive Approach Not to Work in Case of Iran: Leader 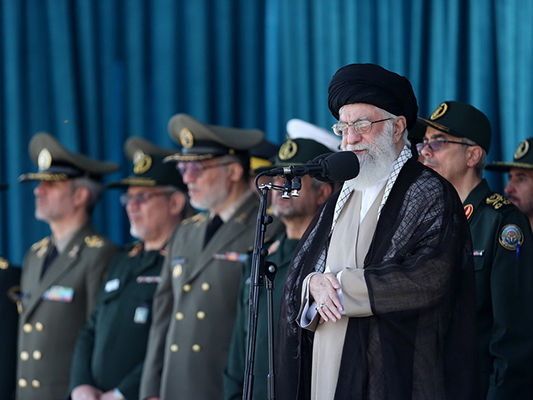 Ayatollah Seyyed Ali Khamenei, the Leader of Iran’s Islamic Revolution, has blasted Washington’s ‘cruel and coercive’ behaviour towards Tehran and the nuclear deal, stressing that such approaches would not work in the case of the Islamic Republic of Iran.

Speaking at a graduation ceremony of Iran’s police cadets in Tehran on Sunday, Ayatollah Khamenei referred to the US impudence in case of the nuclear deal between Iran and world powers, and said Washington has made an evil move on JCPOA every single day.

“This proves how right Imam Khomeini was when he described the US as the ‘Great Satan’,” the Leader noted, adding that the US is really the most evil one.

Ayatollah Khamenei further noted that Iran will need to produce at least 20,000 megawatts of nuclear power within the coming years, but the US is opposed to the scientific progress of Iran and other nations.

Therefore, the Leader added, when Iran tried to achieve the technology as part of its legitimate right, the US stood against it and imposed cruel sanctions.

“Iranian officials finally decided to negotiate [the country’s nuclear program] and even ignore part of their rights so that the sanctions are removed,” Ayatollah Khamenei noted.

However, the Leader added, “today we see that despite all the agreements, commitments, and extensive negotiations, the US behaviour towards the talks and their results is totally cruel and coercive.”

“Officials of the Islamic Republic should prove it to the corrupt leaders of the United States that they rely on their own people, and the powerful nation of Iran […] won’t accept and bow to bullying,” Ayatollah Khamenei went on to say.

“The Americans should know the Iranian nation will stand on its honourable and powerful stances,” he noted, adding that the country will not back off when it comes to national interests.

“The enemy should know if bullying and coercion works in other parts of the world, it won’t work in the Islamic Republic, and this Establishment is standing firmly and strongly.”

Blasting the US officials for accusing Iran of telling lies, the Leader said, “You are the ones who lie; liars are those who don’t want to see the prosperity of any nation and believe it is right to secure one’s illegitimate interests by any means.”

“The Iranian nation has stood firmly and any wrong move by the hegemonic system on the JCPOA will draw a reaction from the Islamic Republic,” Ayatollah Khamenei added.