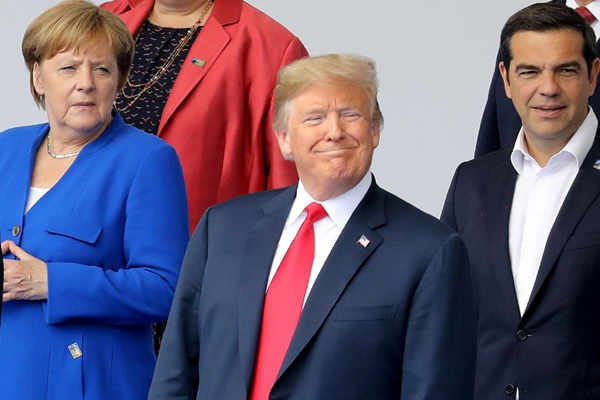 A former Iranian diplomat says US President Donald Trump is endangering the future economic, political and security of Europe through its anti-Iran policies.

Mohsen Pakaein, a former ambassador to the Republic of Azerbaijan and Thailand, made the remarks in an interview with Shafaqna.

“The US’ action against Iran will intensify the arms race, especially in the nuclear field, and this will be the real problem for Europe’s future,” he noted.

“Indeed, Trump also questions Europe’s economic, political and security future by acting against Iran. It seems to me that in European countries there is a domestic pressure from the people and the elites against the leaders, and if they do not think of a solution, they may be faced with domestic dissatisfaction in their country.”

He said European countries, including France, want to deal with the Iranian people in a manner consistent with the arrogance of the United States and threat Iranians, but they have usually failed if they acted based on threat, intimidation, and psychological war.

Regarding the recent statement by French Foreign Minister Jean-Yves Le Drian, who called Iran’s suspension of its commitments “bad reaction” and urged the Islamic Republic to show political maturity, he said, they want to deal with Iran with the threat approach, but it fails.

Pakaein also talked about the practical steps taken by France to preserve the JCPOA, saying the European countries, including France, have two approaches.

“One is an independent approach, and France as a result of hostilities towards Iran, adopts a tough stance against our country. But there is another stance within the framework of the European Union, which is set forth by Federica Mogherini. This is a more rational stance without much ado. I think we need to take seriously the European Union’s position on the issue. It is the European Union that has to make the final decision and within 60 days it should find a way to solve Iran’s problems.”

He further mentioned that usually, Europeans do not lift sanctions so as not to fulfil their commitments. To do so, in some way they limit their commitments about the nuclear deal, noted Pakaein.

“They claim we do not have an influence on European private companies and European banks, while this is not the case. We have seen when Europe’s interests are being jeopardised by the US in terms of the tariffs set by Washington against European products, the Europeans stand united. Both governments and private companies as well as banks take a stance against the United States and put in place a reciprocal policy against Washington,” the Iranian former diplomat said.

“That is, when their own interests are endangered, they have the capacity to stand against the United States. But when it is about the interests of Iran, and the sanctions must be removed based on legal and international laws envisaged in the deal, they do not take any action. At this time, they waste time and under the pretext of not having influence on corporations and banks, they do not go ahead.”

Pakaein also maintained that Iran’s measure to stop some of its commitments was wise and smart, stating that “we do hope the Europeans take this message seriously.”

“The JCPOA is very important for Europeans, and in fact, apart from being a commitment between Iran and the P5+1, it is a formula for confronting US unilateralism. It also strengths multilateralism in the world. In my opinion, Europe must demonstrate its political maturity and meet Iran’s demands. At the moment, we must wait and see what the European countries will do,” noticed the former Iranian diplomat.

Under the JCPOA, Tehran undertook to put limits on its nuclear program in exchange for the removal of nuclear-related sanctions.

Trump’s withdrawal from the accord came despite massive efforts by the European allies of the US to convince him to stay in the deal, which was reached between Iran and the P5+1 group of countries.

Late in January, the three European parties to the 2015 nuclear deal issued a joint statement, announcing the launch of a long-awaited direct non-dollar payment mechanism to maintain their trade ties with the Islamic Republic in the face of the sanctions.

Germany, France and Britain registered the mechanism, known as the Instrument in Support of Trade Exchanges or INSTEX.

INSTEX was initially planned to be used for selling food, medicine and medical devices to Iran, but it could also be expanded in the future.

An Iranian structure parallel to INSTEX, called the Special Trade and Finance Institute (STFI), was launched later and the European signatories have no longer any excuse to delay the start of their job.