US Afraid of Iran’s Presence at UNGA: Rouhani 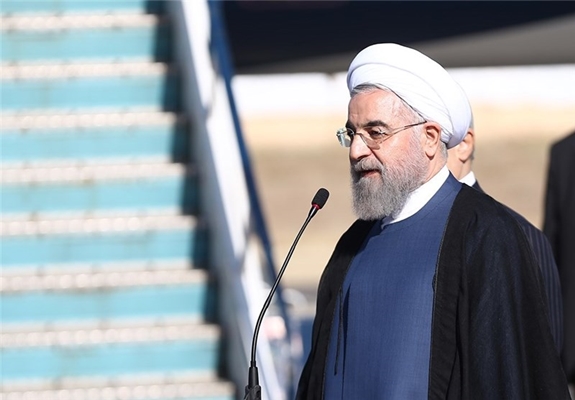 Iranian President Hassan Rouhani says the US is afraid of the Iranian delegation’s presence at the General Assembly of the United Nations in New York, as the country uses it as a good chance to publicly announce the Iranian nation’s opinions.

Rouhani said it is a great opportunity to explain to the people and countries of the world the unjust and cruel acts that are being adopted today against the Iranian people.

The Iranian president made the comments on Monday at Tehran’s Mehrabad Airport before leaving for New York to attend the 74th meeting of the United Nations General Assembly.

“With regards to the complex and difficult issues that the Persian Gulf region is facing today, this year’s trip to New York to attend the annual United Nations General Assembly is very important,” underlined Rouhani.

It is felt the Americans are not very much interested in the presence of the Iranian delegation at the United Nations headquarters and do not like the Iranians’ statements at different levels, he said.

“This may have a variety of reasons, including that they are afraid of the truth or do not want us to influence public opinion of their nation.”

He reiterated that when the Americans do not want the Iranian delegation to attend the UNGA, “we must, of course, insist on this presence and must go to the United Nations and express our views and remarks clearly.”

His comments came after the US’ issued visas to the Iranian president and the foreign minister with an unnecessarily long delay, and even refused to issue visa to several members of the Iranian delegation.

The delay in issuing the visas was even convincing the Iranian delegation to cancel the visit, but it was finally issued a few days ago.

“We are travelling to the United Nations this year in a situation that US cruel sanctions against the Iranian nation have reached its climax and they themselves admit there is nothing left to be sanctioned. They have recently reintroduced sanctions that have already been imposed, and it means they are totally desperate,” he said.

In recent weeks, the regional situation has become tenser, he said, adding that there are some conflicts and concerns that their root cause is quite clear, but with the accusations that they level, the Americans are clearly seeking other goals.

Rouhani said the reason for such actions is that the US wants to completely control the region and take over all the oil in the eastern region of Saudi Arabia, and this is of course a US dispute mainly with China and others.

“Americans want to make the most of this opportunity, and they are looking to conclude billion-dollar defence system contracts with regional countries. So it indicates they have other goals for their prolonged presence in the region,” maintained Rouhani.

He highlighted that this plan is not just for the security, but also for other issues and is dubbed the Hormuz Peace Initiative.

“We hope to be able to announce to the world that Iran seeks long-term peace in the region,” Rouhani added.

“Reactions to the initiative are still unclear while the US announced yesterday that they are waiting for the project’s dimensions to be clarified.”

Iran’s president further affirmed that the solution for the regional issues should be found within the region and those who come from other regions cannot guarantee peace.

“The Americans have been present in the region since 2001, but they never could provide security in the region,” concluded Rouhani.