UN: Saudi Use of Cluster Bomb in Yemen May Amount to War Crime 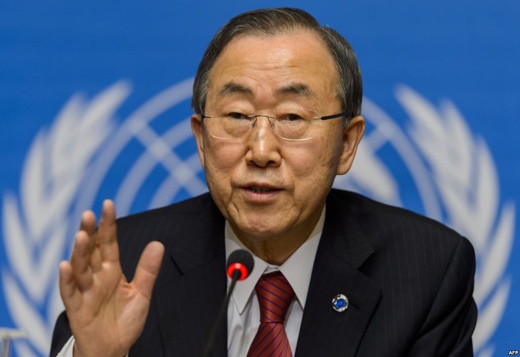 UN Secretary-General Ban Ki-moon warned that the use of cluster bombs in Yemen by Saudi Arabia may amount to war crimes.

“The use of cluster munitions in populated areas may amount to a war crime due to their indiscriminate nature,” the UN chief said in a statement on Friday, AFP reported.

Ban said he had received “troubling reports” of cluster bomb attacks on January 6 on the Yemeni capital of Sana’a.

Cluster bombs are banned under a 2008 international convention, although Saudi Arabia and the United States are not signatories.

The office of the UN high commissioner for human rights said Tuesday that its staff in Yemen had found remnants of 29 cluster bombs during a field visit in Haradh district in the northwest.

The warning over possible war crimes was a clear sign of mounting frustration at the UN with Saudi Arabia’s 10-month aggression against Yemen.

The UN chief said he was “deeply concerned about the intensification of coalition airstrikes and ground fighting and shelling in Yemen, despite repeated calls for a renewed cessation of hostilities.”

The Saudi-led strikes have claimed the lives of more than 7,500 people and injured nearly 14,000 others. They have also taken a heavy toll on the impoverished country’s facilities and infrastructure, destroying many hospitals, schools, and factories.