Two super oil tankers carrying crude from the Persian Gulf region have reportedly been targeted in the Sea of Oman.

Initial reports said that two explosions were heard aboard the tankers and distress calls were received by ports in both Oman and Pakistan.

Bloomberg reported that the oil tanker Front Altair was on fire, a UAE official at the port of Fujairah and a person with knowledge of the matter said vessel had loaded oil from the Abu Dhabi before setting off to sea.

According to Marine Traffic, the Front Altair vessel built in 2016 was operated by Norway and was on its way to Taiwan carrying the flag of Marshal Islands.

Taiwan’s CPC says the vessel was carrying 75,000 tonnes of Naphta for the company when it was hit on Thursday. 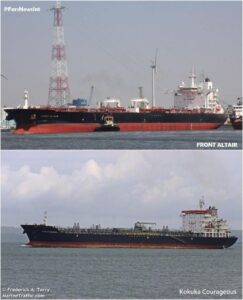 The other vessel was also identified as the Panama-flagged Kokuka Courageous.

The Kokuka Courageous was sailing from Qatar’s Ruwais to Singapore with a cargo of Methanol. It has been damaged as a result of the suspected attack, an official said, according to Bloomberg.

Master and crew of the vessel were rescued from a lifeboat by nearby vessel, Reuters said.

Media reports later said that the Front Altair has been completely drowned.

Four shipping and trade sources later announced that the two ships have been evacuated after the incident and the crew are now safe.

Iranian official news agency IRNA later quoted informed sources as saying that 44 sailors and crew members of the two oil tankers targeted in Sea of Oman have been rescued by Iran’s navy and are now on the Iranian Island of Jask.

It wasn’t immediately clear what the cause of the fire was. The “UK and its partners are currently investigating,” UK Maritime Trade Operations said on its website.

The explosions came a few weeks after four other oil tankers were targeted off the port city of Fujairah in the United Arab Emirates, in what Emirati officials described as a “sabotage” attack.