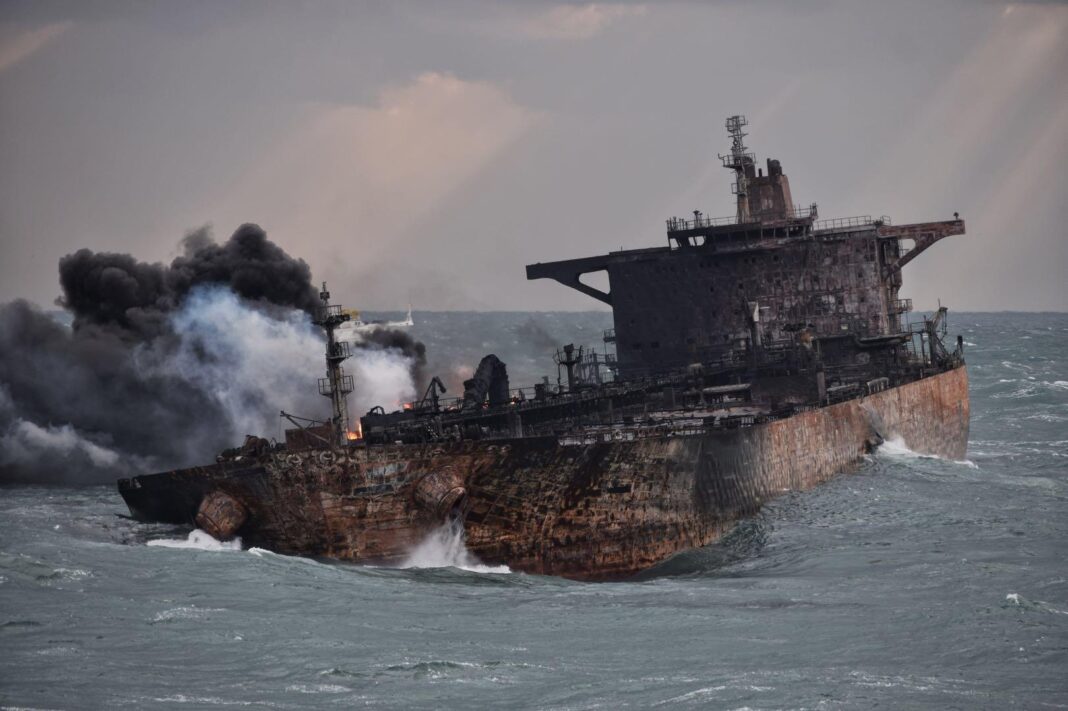 Chinese rescuers have recovered the bodies of two crew members on an Iranian oil tanker that has been burning since it collided with a freighter last week in the East China Sea.

The Chinese rescue forces managed to get into the ship for half an hour Saturday morning to find two new bodies.

Sirous Kianersi, the managing director of National Iranian Tanker Company (NITC), said in a Farsi interview with the IRIB News Agency in Shanghai that due to the high level of toxic gases and lack of adequate oxygen, the Chinese forces got into the oil tanker for only half an hour and then left the vessel.

He added that the Iranian army commandos are ready to begin the operation, and if the conditions are met, the operation will be carried out.

Kianersi went on to say that the two bodies were taken outside the Sanchi oil tanker, but the identity of the bodies is still unknown.

State broadcaster China Central Television (CCTV) said the bodies were found on the lifeboat deck of the Sanchi.

CCTV added that rescuers were able to recover the ship’s data and video recordings.

Meanwhile, Iran’s Minister of Labour, Cooperatives and Social Welfare Ali Rabiei who has been tasked with heading the follow-up committee of oil-tanker-accident arrived in Shanghai Saturday morning.

Upon his arrival, the Iranian minister directly headed to the crisis room at Shanghai airport to coordinate and review the rescue efforts and hold meeting with Chinese authorities.

Afterwards, Rabiei departed for Yangshan Port to stay abreast of the latest developments. Iran’s ambassador to China, deputy chief of Iran Parliament’s National Security and Foreign Policy Commission, and several other officials from Ports and Maritime Organization and the National Iranian Tanker Company are accompanying the minister.

According to the IRIB News Agency, it takes about 15 hours to reach the nearest place to the scene.

It was equivalent to about 1 million barrels, and worth around $76 million.

There were 30 Iranians and two Bangladeshis working as crew on board. The cause of the collision remains unclear.

It is the second collision for a ship from the National Iranian Tanker Co in less than a year-and-a-half.

In August 2016, one of its tankers collided with a Swiss container ship in the Singapore Strait, damaging both ships but causing no injuries or oil spill.