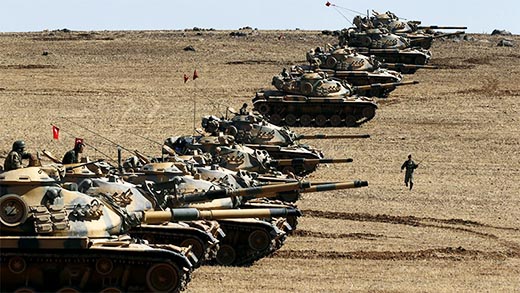 Given previous revelations about Ankara's ties with and support for the Daesh terrorist grouping, Turkey's claim that it wants to take on the terrorist group sounds more like a joke than reality.

Turkish troops with tanks and armored personnel carriers crossed the border into Iraq in early December and took up position in a camp near the Daesh-held northern city of Mosul.

On December 8, Javanonline published an analysis on one possible motive behind Ankara’s move. The following is the translation of part of that analysis:

Sources close to Popular Forces [fighting alongside the Iraqi Army against Daesh terrorists] have revealed that fugitive [former vice-president] Tariq al-Hashimi has returned to Iraq along with Turkish military forces and is based in the camp of Zalkan near Mosul.

The same sources say that al-Hashimi is in touch with former parliament Speaker Osama al-Nujaifi as well as Atheel al-Nujaifi, a former governor of Nineveh Governorate who stands accused of playing a role in the fall of Iraq’s second largest city to Daesh militants.

Hashimi was sentenced to death three times by the Iraqi Judiciary after being found guilty of leading assassination squads and ordering terrorist explosions. As a result of terrorist acts in which Hashimi was implicated, a large number of Iraqi citizens, mostly Shiites, lost their lives.

These sources say that Osama al-Nujaifi and Atheel al-Nujaifi act in coordination with the Turkish intelligence and Army. They are said to have cooperated with al-Hashimi in setting the stage for Turkish troop deployment to Iraqi soil.

The Turkish military presence near Mosul is meant to prevent Popular Forces from closing in on the city to wrest its control from Daesh militants. It is also designed to provide enough manpower for a US and Turkey-backed initiative to declare a Sunni region in Iraq after Mosul and al-Ramadi have been liberated.

The same sources say that the Iraqi Kurdistan Region, specifically its president Masoud Barzani, is a key coordinator between Turkish officials, leader of al-Hashd al-Watani and the US military for the deployment of Turkish forces near Mosul.

They say that Turkish forces used the cover of night to advance deep into the Iraq soil and opted for a new blackout before they officially announced their presence on Iraqi soil.

A spokesman for the so-called Nineveh Liberation Forces has said that Turkish troops are preparing to help the international coalition retake Mosul from Daesh militants and to that end Baghdad is expected to send in more troops.

The revelations about contacts between al-Hashimi and Osama al-Nujaifi and Atheel al-Nujaifi with the US and Turkey ahead of and during the Turkish incursion into Iraq come at a time when the United States says that it plays no role in this, and that Turkish military deployment in Iraq is not part of the operations of the international anti-terror coalition.

Turkish officials, who say that they shot down a Russian bomber in November for violating their country’s airspace, say their military incursion deep into the Iraqi territory is designed to take on Daesh. Given the previous revelations about Ankara’s ties with and support for the Daesh terrorist grouping, Turkey’s claim sounds more of a joke than reality.