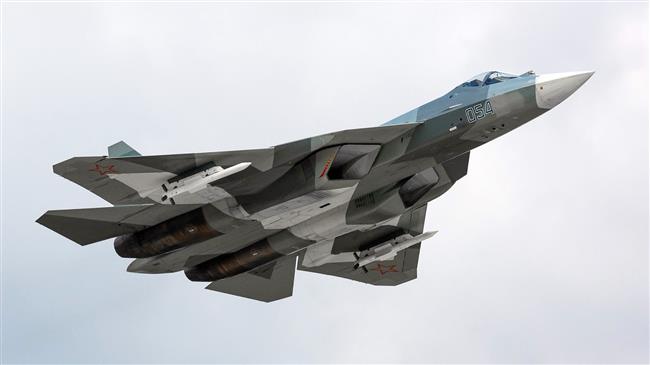 Turkey would likely opt to purchase Russian Sukhoi Su-57 twin-engine warplanes in place of US F-35 single-engine stealth fighter jets if Washington suspends the delivery of the latter in response to Ankara’s sale of S-400 anti-aircraft missile systems from Russia.

According to a report published by the Turkish-language Yeni Şafak daily newspaper on Sunday, the unit cost of the Sukhoi Su-57, which is being developed for air superiority and attack operations, is almost half the cost of the F-35.

The report added that the Russian fifth-generation fighter jet can respond to Turkey’s national needs much more than F-35 as the latter has to be fully equipped with Turkish software, munitions, radar and avionics before being operated in the Turkish Air Force.

Earlier this week, a US Senate committee passed a defense policy bill, which would effectively bar the delivery of F-35 fighter jets to the  North Atlantic Treaty Organization (NATO) partner Turkey.

The amendment to the $716 billion National Defense Authorization Act (NDAA), had been proposed by Democratic Senator from Michigan Jeanne Shaheen and Republican Senator for North Carolina Thom Tillis.

It removed Turkey from the F-35 program over its purchase of S-400 systems as well as imprisonment of Andrew Brunson, a Christian pastor from North Carolina, on spying and terrorism charges.

On April 3, Turkey’s President Recep Tayyip Erdogan and his Russian counterpart Vladimir Putin said in the Turkish capital Ankara that they had agreed to expedite the delivery of S-400 missile systems. The delivery is expected to start between late 2019 and early 2020.

The developments came only two days after Sergey Viktorovich Chemezov, the Chief Executive Officer of Russian state corporation Rostec, told the Kommersant daily newspaper that Russia would supply Turkey with four batteries of S-400, worth $2.5 billion each, and Moscow was expected to begin the first deliveries in March 2020.

Chemezov added that Turkey would pay 45 percent of the cost of the agreement up front, while Russia would provide loans to cover the remaining 55 percent.

The United States has reportedly warned Turkey against the consequences of its decision to buy S-400 surface-to-air missile batteries from Russia, saying Washington could slap Ankara with sanctions over such a purchase.

On August 2, 2017, US President Donald Trump signed into law the Countering America’s Adversaries Through Sanctions Act (CAATSA) that imposed sanctions on Iran, Russia and North Korea.

The S-400 system, whose full name is the Triumf Mobile Multiple Anti-Aircraft Missile System (AAMS), is an advanced Russian missile system designed to detect, track, and destroy planes, drones, or missiles as far as 402 kilometers away. It has previously been sold only to China and India.

Turkey is striving to boost its air defense, particularly after Washington decided in 2015 to withdraw its Patriot surface-to-air missile system from Turkey’s border with Syria, a move that weakened Turkey’s air defense.

Before gravitating towards Russia, the Turkish military reportedly walked out of a $3.4 billion contract for a similar Chinese system. The withdrawal took place under purported pressure from Washington.

Ankara’s ties with its Western allies in NATO have been strained over a range of issues.

Erdogan has been critical of Washington for supporting Kurdish groups in Syria that he says are responsible for terror attacks inside Turkey.

The Turkish leader has also slammed American officials for rejecting his requests to hand over Fethullah Gulen, a powerful opposition figure living in the US.