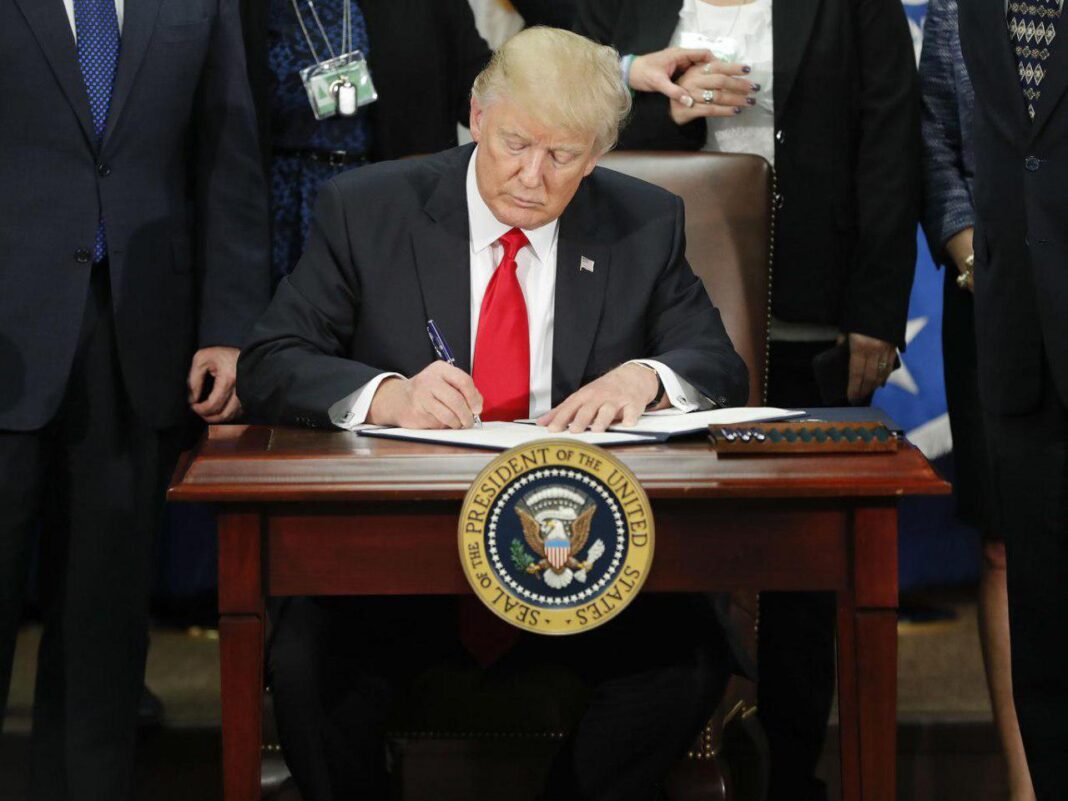 An Iranian columnist says the protests staged by opponents of US President Donald Trump do not mean they are really identifying themselves with Iranians and other Muslims, but they are rather using the issue for their own benefit. To them, Iran is still the axis of evil!

Here is the full text of a Farsi article by Kobra Asoopar in Iranian daily newspaper Javan about the way opponents of Trump are taking advantage of his executive order to ban the citizens of seven majority-Muslim states from entering the US:

Trump wants to make good on his campaign promises only days after he took office. Getting tough on migrants was part of his high-profile campaign pledges, and has now materialized after Trump issued an executive order imposing visa bans on the nationals of seven countries. The order turned into a binding document after the president signed it, and triggered chaos in the airports of many countries, including the US itself.

Iranians traveling via airports in such countries as Turkey, Qatar, and the like were not allowed to get on board US-bound flights. Iranians who reside in the United States but have left the country for whatever reason could not return to the US.

On the surface, these problems constitute the whole story, but the main issue is something else, which we will discuss below.

These days, through media outlets and social networks, folks in Iran passionately follow and share news pertaining to American people’s opposition to Trump’s executive order; this is an obvious mistake. This is the second point we will discuss in this article.

Getting a US visa is not the most important concern for Iranian people. Back in October 2013, one of the Iranian reformist newspapers carried a headline suggesting President Hassan Rouhani had ordered the establishment of a direct air route between Iran and the United States. The headline was so irrelevant that it would have the audience privy to Iran-US ties laugh hysterically.

Now, fast-forward to today, focusing too much on the problems created for Iranians travelling to the US can divert our attention from the main issue.

If the problem were only the travel restrictions imposed on Iranian artists, sportsmen or expatriates living in the US, the issue might be settled through lobbying and the visa ban might be lifted for certain individuals. However, the main issue is something else. Even if Trump annuls his executive order right now, that issue will remain unresolved.

There is a political game known as “Iranophobia” which has been around for years. It seeks to create the impression around the world that Iran is on a par with those battle-scarred nations. Moreover, Iranophobia does not draw a line between Iranian Muslims and Salafi and Takfiri Muslims and terrorists. The point is Iran has been dubbed an axis of evil and terrorism in the eleventh administration (led by President Hassan Rouhani) like it was in the seventh and eighth administrations (led by then President Seyyed Mohammad Khatami).

Terrorists in Saudi Arabia and parts of Syria and Iraq are sponsored by the US government. And even if the issue of visa ban on Iranians travelling to the US is settled today, the image they have created of Iran is here to stay. Former US President George W. Bush painted an “axis of evil” picture of Iran, which remained. Likewise, Trump is creating the impression that Iran is a dangerous and disorganized country which breeds terrorists. If we do not counter attempts aimed at painting such a picture of Iran, that image will remain in memories. In 2001, Iran was grouped together with North Korea and Iraq as an “axis of evil,” and now in 2017, is mentioned along Somalia, Libya, Sudan and other countries which might pose a threat to the US.

Don’t get infatuated with Americans’ opposition to Trump!

Photos of Muslims saying prayers at a US airport despite objection by the police are being shared on social media networks. Images of popular protests in American airports, streets and universities against Trump’s executive order are going viral as well. With these photos, shall we begin to wonder what human-loving people Americans are, or how extensive their opposition to Trump’s decisions is? The reality is those opposing Trump’s orders are in the minority, no matter how many they are. American people are the ones who voted for Trump and made him president despite his irrational and racist policies on immigrants, particularly Muslims. PR-wise and politically speaking, it may seem the right thing to make a distinction between governments and nations, but it should not serve as a base for decision-making. Trump has not come from Mars; American people have elected him.

On the one hand, Americans tend to advocate freedom of expression and opinion, from Sunnis saying prayers at an American airport to choosing one’s sex partner to homosexuality. Therefore, one cannot get surprised at their support for Muslims praying at an airport. Even if a bunch of gays had been confronted by police, again American people would have defended them against police opposition.

US under Trump is the other side of US under Obama

Another important point to be taken into account by Iranians is that it seems that opposition to Washington’s visa ban on Iranians has turned into a pretext for Americans to settle old scores with the US establishment. American people seem to be using this opposition to make their presence felt and lash out at Trump. They just want to oppose Trump, no matter what he does. In fact, they are not on Iran’s side, but simply want to express their opposition to Trump. We shouldn’t welcome Americans’ using Iran as an excuse to settle their own political scores!

Opponents of Trump are those who preferred Democrat Hillary Clinton to be elected to the White House. They want to create the impression that during the rule of Barack Obama, also a Democrat, the US favoured engagement with the world and was a lenient and wise country while the US under Trump is violent and unwise. But this is far from reality. The very same opponents of Trump were the supporters of Obama whose policies gave rise to ISIS. Tough sanctions against Iran, plans to promote Iranophobia and Islamophobia, a visa ban on those who had travelled to Iran, etc, are the legacy of Obama’s presidency. The US has not changed and we should not be impressed by Americans’ opposition to Trump. Even if Clinton were elected president, as Trump’s opponents desired, still tougher sanctions would be slapped on Iran, but they would be soft enough to hit Iran hard without Iranians noticing where the blow came from!

The US under Trump is the same America that Barack Obama and Bill Clinton built; it is only a little more brazen and more vociferous. We shouldn’t fall for the mask worn by opponents of Trump. That is why Leader of the Islamic Revolution Ayatollah Seyyed Ali Khamenei openly announced that neither of the two US parties (Republicans and Democrats) is competent enough to express their views about Iran.

“Neither the party which is in power in the US today, nor the rival party which ruled the country in the previous administration, are morally competent, because both parties have committed numerous crimes.”

The Leader said the biggest sin committed by the party supporting the current US administration is the “creation of dangerous terrorist networks.”

The previous US administration is also to blame for the crimes and atrocities committed in Iraq and Afghanistan. Millions of innocent people were killed in those countries; even thousands of Iraqi scientists were identified by the criminal Blackwater group and killed. So, neither political party in the US takes precedence over the other as far as moral principles are concerned. These are the administrations which are in power in the United States, and it is wrong to believe we can reach understanding and common ground through dialog.