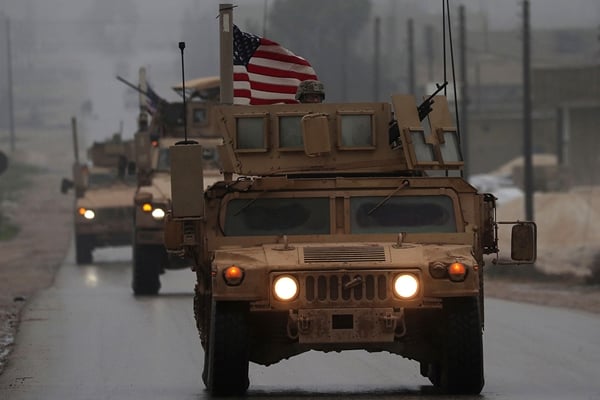 A former French general believes the late December announcement by US President Donald Trump that he will withdraw forces from Syria and Afghanistan is just for domestic purposes, and is part of Trump’s game to push the Congress to obey its Mexico wall demand.

Dominique Delawarde, a former officer in the French military from 1959 to 2005 and a graduate of the prestigious military academy of Saint-Cyr, says Trump is doing his best to fulfil his electoral promises, as he seeks re-election in the next presidential election, and his plan to pull US forces out of the Middle East is just part of the same framework.

He made the remarks in an exclusive interview with IFP News on the sidelines of the international conference on Peace and Security in West Asia in Tehran earlier this week.

Pointing to the shutdown of the US government over a feud between Trump and Democrats who control the US House of Representatives, Delawarde said the Syria announcement is part of Trump’s tactics to defeat the lawmakers and push forward his electoral pledge to build a wall on the US-Mexico border.

The House has rejected Trump’s demand that a bill to keep the federal government operational include more than $5 billion to help build the wall, leading large parts of the government to shut down on December 22.

According to Delawarde, “Trump has a big problem with his Congress. He is placing pressure on the legislature.”

“He is telling Israel that if you want me to stay in Syria, you should go to the Congress -through AIPAC, for example- and convince just 10 lawmakers to vote for me so I can get my bill passed,” he said.

Delawarde said Trump might bring home some forces or send them somewhere else, but it would be a symbolic move and he will not withdraw completely.

“If he gets what he wants, he can move some troops to Iraq or elsewhere. That’s not withdrawal. I’m 100% sure he won’t leave now,” he said.

Purpose of US Presence in Syria

Delawarde said the occupation of Syria by the US forces only has one goal: to block the route from Iran to Syria and Lebanon, and prevent Iran from increasing threats against Israel.

“It’s all about Iran. It’s the reason why they want to stay in the country. So they have no motive to leave the country now,” he said.

US Would Be Forced to Withdraw

Although the US won’t withdraw from Syria now, Delawarde said Washington will be forced to do so in the near future.

Unlike what the Western media portray, the US is in no good shape and the country is about to go into a big crisis, he said.

Delawarde said the US has a huge debt, with just the federal debt reaching an unprecedented amount of 23,000 trillion dollars. Moreover, they are losing big in a trade war with China, he said.

“It’s the beginning of the end. The US has so economic bubbles that could explode soon. It may take a few months, one year, two years or 10 years – but it will certainly happen,” he said.