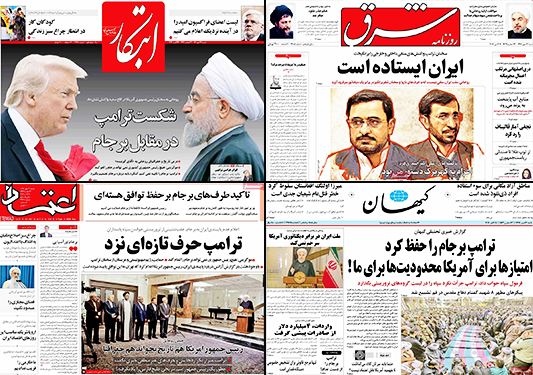 Iranian newspapers, in their editorials and op-eds on Saturday, have reacted harshly to US President Donald Trump’s anti-Iran comments.

US President Donald Trump’s anti-Iran comments in his speech on October 13, 2017 aimed at announcing Washington’s new strategy towards Tehran immediately drew reactions from Iranian pundits who condemned Trump’s allegations while stressing the need for further unity among Iranian groups and political camps. Iranian newspapers, too, focused their attention on the destiny of the Iran nuclear deal known as the Joint Comprehensive Plan of Action (JCPOA) and Trump’s anti-Iran comments.

Ahmad Gholami, the editor-in-chief of the reformist Shargh newspaper has, in an editorial, spoken of “war with the US to the death.” Such a position could mean reformists are inching toward the language of “resistance” as highlighted by conservatives. In his opinion piece, Gholami writes that Trump, by using real and unreal threats, seeks to launch a trade war against Iran in order to make the country sit at the negotiating table and give concessions on non-nuclear issues and back down from its national interests.

“If Trump’s plan turns out to be a success, at last everybody will think that the US is a well-organized entity, so much so that Obama moved forward with the first phase in the nuclear negotiations, and Trump helped the final phase bear fruit,” wrote Gholami.

“So far, all pieces of the puzzle fit together, except Iran’s reaction to the US. The Iranian government and people have shown that they are not easily predictable. In many historical dead ends, they escaped from danger via talks and deals, and fought to the death to defend their country under circumstances where no one would have thought they would make sacrifices,” added Gholami.

“It is almost not in Trump’s hands [to determine] what decision Iranian people will make, and this is the only missing piece of the puzzle, i.e. he does not know whether Iranians will insist on diplomacy or, in an unbelievable move, will be forced to fight to the death even though they are not willing to fight.

The conservative Kayhan newspaper has, in an opinion piece by Ja’far Bolouri, stressed that Trump seeks to gain more concessions from Iran, not to pull out of the JCPOA. In his article, Bolouri refers to Washington’s attempts to make Iran’s commitments and restrictions under the JCPOA permanent.

“One should ask why the US wants the JCPOA to become permanent if it is to the detriment of Washington?” he asks.

In another part of his article, Bolouri calls on the Iranian government to make efforts more seriously to secure Iran’s rights.

“The P5+l group owes us, and naturally we should treat them as if we are the creditor. But in practice, it is their behaviour which is similar to that of a creditor!” he adds.

“We were supposed to gain concessions in return for living up to our commitments and giving concessions, not to give more concessions. The International Atomic Energy Agency (IAEA), as the judge, has announced time and again that Iran has lived up to its commitments and far beyond. But, unfortunately, the way the Iranian government deals with US breaches of promises does not look like that of a creditor. If such behaviour continues, it will further embolden the enemy. If we give concessions again, the enemy will be emboldened further,” he says.

Hossein Sheikholeslami, an advisor to Iranian Foreign Minister Mohammad Javad Zarif, has also weighed in on the issue in an article published by the Farhikhtegan daily.

He then explains the history of Washington’s hostile actions against Iran, and reacts to comments by Trump, who had described the 1979 hostage-taking incident in Tehran as one of the reasons that contributed to the beginning of enmity between the two countries.

“The enmities did not begin from the Den of Espionage (the title given to the former US embassy in Tehran). The Den of Espionage incident [in which 52 US embassy staffers were taken hostage by Iranian students in November, 1979] happened because the Americans had given shelter to the former Shah of Iran who had fled the country. So, the Iranian nation, with the image it had in mind of the 1953 coup, had every right to raise that objection. Later on, the Americans continued their aggressive and domineering behaviour and shot down an Iranian passenger plane [in 1988]” he says.

“As for the JCPOA, one should ask whether or not such a deal will continue to exist after all, and whether all signatories will remain part of it. … the US should know that the government and diplomatic apparatus of our country will give a crushing response to such comments,” the foreign minister’s advisor says.

Iranian lawmaker Mohammad-Ali Vakili has, in an editorial published in the Ebtekar daily, explained that Trump’s moves emanated from his “logic of running enterprises.”

“Trump moves the chessmen of his political game like a businessman.”

Vakili also explains what he thinks the best way for Iran is to counter Trump.

“We should maintain our vigilance inside the country. Our rapport and unity will ward off the danger of any decision that Trump makes. Our Calm and solidarity guarantees our safe passage through sharp turns,” he says.

“Anyway, Trump’s confrontation with Iran will increase our popularity. Trump’s animosity will further boost relations between the IRGC and Iranian people, and further boost the IRGC’s power,”

The E’temad daily has, in an article by Mohsen Baharvand, weighed in on Trump’s threats against Iran’s military and the US president’s efforts to take Saudi Arabia and other regional US allies on board with Washington’s anti-Iran strategy.

“It’s strange that our neighbouring countries do not understand that insecurity in a country caused by a foreign force will not bring security for them; rather, it will cause insecurity,” he says.

“In the Persian Gulf region, security is a single umbrella; if a hole is created in it, everybody will get wet. Especially, [the same goes for] those neighbours who are sitting in glass houses and throw stones at others. If the US slaps sanctions on our Armed Forces, it has made a strategic mistake. The reason is, all institutions in Iran, especially since the formation of the Armed Forces, including the IRGC, have never expected a favour or positive step from the US. Rather, since the very beginning of their formation, they have assumed the US as an enemy. So, they are no strangers to the IRGC being threatened with sanctions or otherwise, but they are fully prepared to pay the price for this animosity without any concerns.”