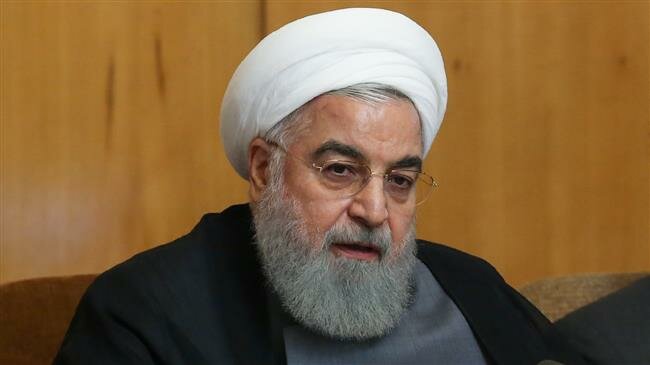 Iranian President Hassan Rouhani has censured the US president for turning a blind eye to the Israeli regime’s nuclear arsenal while accusing Iran of seeking to develop nuclear weapons.

Rouhani pointed to Donald Trump’s repeated allegation that Washington is concerned about the Islamic Republic’s potential development of nuclear weapons.

The Iranian chief executive, who was speaking at a government meeting in Tehran on Wednesday, then called on Trump to “[instead] talk about Israel, which is a usurper and has stockpiled all such nuclear arms there” if he is really so much concerned about such weapons.

Rouhani also asked his American counterpart why he kept raising the alarm that Iran could acquire such weapons while the United Nations nuclear watchdog regularly inspects the country’s nuclear facilities and verifies the legality of its nuclear energy practices.

The Iranian president also reminded that Trump continued to link the Islamic Republic with an intention to build the weapons, despite the fact that Iran’s highest authority has issued a definitive decree banning their acquisition.

“Are you really concerned about nuclear weapons? Are you unaware of  Leader of the Islamic Revolution Ayatollah Khamenei’s fatwa (religious decree), through which he has ruled development of nuclear weapons as illegal?” Rouhani asked.

“So the [US’] allegations, the way they are stated, and the goal [sought by them] are all unfounded,” the Iranian president noted.

He said Washington’s most recent sanctions targeting Ayatollah Khamenei and his office also showed that it is incapable of comprehending the Leader’s position as a source of religious emulation and his veneration among the Iranian people as a spiritual mentor.

Rouhani regretted that the White House is grappling with bewilderment these days, marked by “indecent and ridiculous” remarks as well as its opting for “scandalous” policies.

The US has been ramping up sanctions against Iran and trying hard to rally its Western and regional allies behind its antagonism towards the Islamic Republic. At the same time, it periodically voices interest in negotiation with Iran and disowns an inclination towards war against the country.

Citing an example of contradiction between Washington’s words and actions, Rouhani referred to its imposing sanctions on Iran’s petrochemical industry last month at the same time Japan’s Prime Minister Shinzo Abe was in Tehran.

“They sent over the prime minister of a decent country, who is himself a cultivated person and his country enjoys a lofty place in the world of politics, to Iran to convey some messages. At the same time, they announced the petrochemical sanctions,” Rouhani said.

“You could not possibly choose a better way to show that you are not telling the truth and are instead playing a game,” he said, referring to Washington.

Iran to US, Europe: You are on the wrong path

Rouhani pointed to the US’ betrayal of its commitments to the Islamic Republic under a multi-lateral nuclear deal, which Washington quit last May as well as the deal’s European partners’ failure to honor Iran’s interests under the agreement.

“The path that you chose was wrong,” he said, adding, “We tell them both to return to their commitments.”