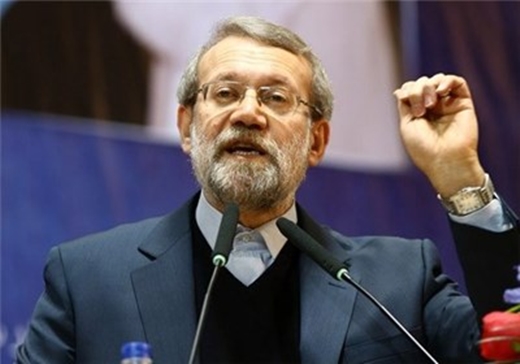 The parliament speaker has said that Iran’s defensive power is to safeguard the country and the region against foreign military powers.

“Iran’s military technologies can become available for the neighboring countries, and they can count on Iran’s military power,” Larijani told reporters on Wednesday on the sidelines of IRGC naval exercises, underway at the Strait of Hormuz, south of Iran.

He also made it clear that Iran and its neighbors are capable enough to ensure security in the region and there is no need for the presence of foreign forces.

“Iran enjoys a capable and smart military force in the (Sea of) Oman waters and can ensure regional security with the help of the other countries,” Larijani added.

The speaker also gave an assurance that Iran’s defensive power is to safeguard the country and the region against foreign military powers.

“The Iranian armed forces’ capabilities are with the neighboring countries and against the alien military powers,” Larijani added.

“The powers should also know that they cannot change the region’s conditions by increasing (the number of) warships,” he stressed.

Earlier in the day during the naval drills, the IRGC assault speedboats targeted and sank a mock warship, a model of Nimitz-class aircraft carrier at the Strait of Hormuz.