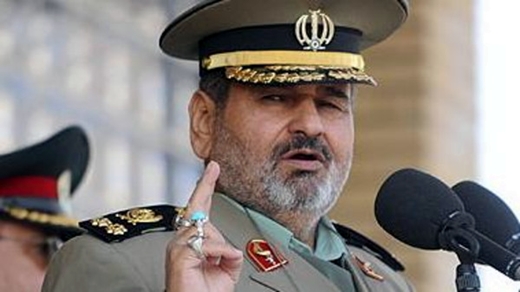 The chief of staff of the armed forces has shown reaction to military threats by Republicans against Iran, saying that they are seeking to revive President Bush’s belligerent presidency.

The chief of staff of the Iranian armed forces has said that US threats are nothing more than hot air and that Republicans are reactionaries who want to go back to the time of “crazy George Bush”.

Major General Hassan Firouzabadi made the comments on the sidelines of a military parade the armed forces staged on Tuesday (September 22) to mark the start of Sacred Defense Week. Fars News Agency published the general’s remarks on the US threats against Iran, the preparedness of the armed forces and the Joint Comprehensive Plan of Action. The following is the translation of what else Firouzabadi told reporters:

Today the armed forces are well-prepared and in best shape thanks to support by members of the public and the Supreme Leader. Iran’s vibrant armed forces, which have made remarkable progress [over the years], are always prepared to develop new technologies.

Iran’s armed forces are at the ready to effectively defend the country’s geographical and ideological beliefs. Building on public support, we are ready to properly defend our borders.

Threats by certain countries, the US included, are nothing but empty talk. Some shriek out of fear, but the fact remains that nothing threatens Iran in the current situation.

Anybody who possesses a priceless pearl tries to keep it safe. The Iranian nation, led by the Supreme Leader, will defend its [cherished] possessions. This nation and its leader should be fully defended.

Iran’s defense doctrine is centered on one core principle: defending the world’s Muslim and freedom-seeking nations. Today, the US, Israel and Britain work hand in glove with terrorists in the region.

Terrorists in this region are an inseparable part of world powers. Iran, which seeks to take up a struggle against colonialism, has to stand up to their agents in the region, that is to say the terrorists. All regional countries should know that the US, Israel and Britain are supporters of terrorists.

Republicans’ opposition to JCPOA and military threats against Iran

Republicans are reactionaries who want to take the US back to the era of crazy George Bush, who tried his utmost to attack Iran but failed.

The US says it can launch an attack but cannot handle the possible reactions such an attack would draw. A war will earn them nothing, because what they say is simply full of hot air.